Read an excerpt from In Over Her Head: Lights, Camera, Anxiety by Krysten Lindsay Hager

Welcome to the In Over Her Head: Lights, Camera, Anxiety (The Cecily Taylor Series #2) blog tour! Today I have an excerpt for you to read from this fun YA series that I have enjoyed reading. 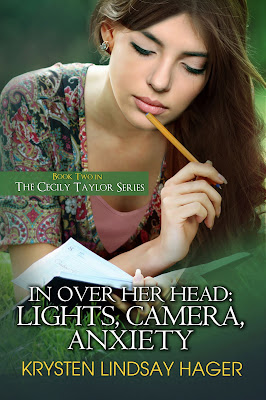 Cecily feels like she has it all: great best friends, the beginnings of a career as a model/actress, and she’s dating her favorite singer, Andrew Holiday. Then Cecily’s best friend Lila begins to ditch her every time Lila’s boyfriend calls. Cecily feels lost, but she and Andrew begin connecting more and she’s never been in a relationship where she felt so understood. Andrew even begins to confide in her about his anxiety. Soon Cecily experiences her own anxiety on a magazine photo shoot, but she manages to impress the magazine staff. Just when it seems like all her dreams are coming true, everything comes crashing down when a photo of Andrew with another girl appears online. He swears nothing happened, but Cecily is crushed. She feels like she’s lost two of the people closest to her. Was her perfect relationship real or was she in over her head? 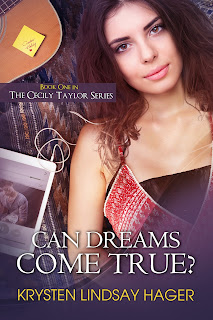 Cecily has always had a huge crush on singer Andrew Holiday and she wants to be an actress, so she tags along when her friend auditions for his new video. However, the director isn’t looking for an actress, but rather the girl next door—and so is Andrew. Cecily gets a part in the video and all of Andrew’s attention on the set. Her friend begins to see red and Cecily’s boyfriend is seeing green—as in major jealousy. A misunderstanding leaves Cecily and her boyfriend on the outs and Andrew hopes to pick up the pieces as he’s looking for someone more stable in his life than the models he’s dated. Soon Cecily begins to realize Andrew understands her more than her small-town boyfriend—but can her perfect love match really be her favorite rock star?


Excerpt:
“They were talking about how they’re using unknown models right now and I mentioned how awesome you were in the video and they agreed. We started talking and they wondered if you’d want to come to New York and do a shoot for the magazine. What do you think?” he asked.
I almost fell off my bed. Me? Model? I wasn’t pretty enough for that and everyone would write in to let them know that just like they all felt the need to voice that opinion in the online video comments.
“Wow, it’s…wow.”
“I know, right? And I’m here for a few weeks recording so we could see each other. My manager said he’d talk to your parents and work out the details. You’d be working just to get exposure, so the contract would be about rights and not money—is that cool? It’s a great way to get your name out there and stuff for your book.”
“My book?”
“Your portfolio. You know, the photos people look at to decide whether or not they want to hire you for modeling jobs.”
Was I going to be modeling enough that I needed a book? Did this magazine actually want me? It sounded too good to be true—going to New York to model and be in a magazine while visiting my pop star boyfriend. Was this my life?
“I don’t know if my parents will go for it,” I said.
“Let my manager talk to them and see what magic he can work. He wants to help this magazine out, too. You want to do it though, right?”
Part of me did—the part of me that wanted a big life and to be famous and adored. The reality side of me was an anxious mess just thinking about flying out there though.
“Yeah, for sure,” I said hoping I sounded convincing.
“Great, give me your parents’ number and I’ll have my manager give them a call.”
I felt like I was having an out of body experience as I recited my mom’s cell phone number to him.
My entire life could change in a phone call.

About the Author
Krysten Lindsay Hager writes about friendship, self-esteem, fitting in, frenemies, crushes, fame, first loves, and values. She is the author of True Colors, Best Friends...Forever?, Next Door to a Star,  Landry in Like, Competing with the Star, Dating the It Guy, and Can Dreams Come True. True Colors, won the Readers Favorite award for best preteen book and the Dayton Book Expo Bestseller Award for children/teens. Best Friends…Forever won the Readers’ Favorite Silver Medal. Competing with the Star is a Readers' Favorite Book Award Finalist. Landry in Like is a Literary Classics Gold Medal recipient.
Krysten's work has been featured in USA Today, The Flint Journal, the Grand Haven Tribune, the Beavercreek Current, the Bellbrook Times, Springfield News-Sun, Grand Blanc View, Dayton Daily News and on Living Dayton. 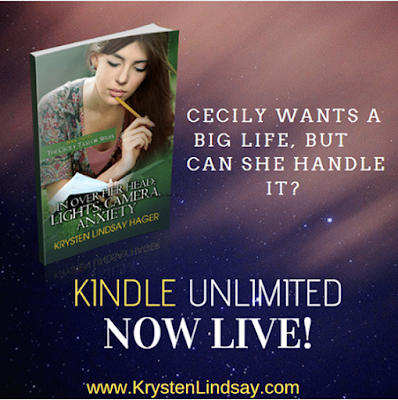