Read an exclusive excerpt from Ancestral Whispers by Jo A. Hiestand

I always love a good British mystery. Just look at my streaming queues and bookshelves at home. So today, I'm sharing with you an exclusive excerpt from Ancestral Whispers by Jo A. Hiestand. Be sure to follow the tour to get even more! And then let the author know what you think in the comments. Best of luck in the giveaway! 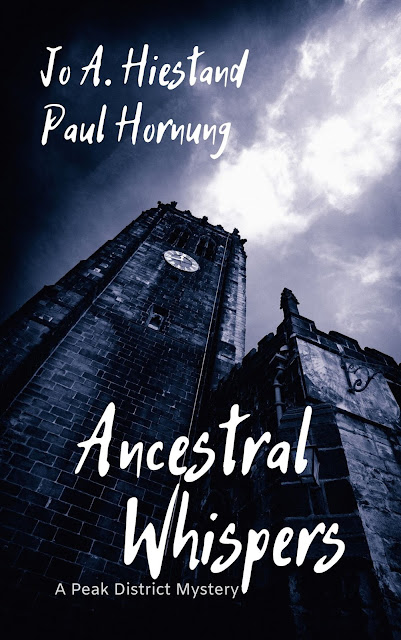 Each year the residents of Nether Haddon celebrate the village’s founding in the time-honored way with games, music, and performances by their sword dancers. But something new is added to the fancy footwork this year: a team member dies ... murdered. Fear, jealousy and suspicion quickly engulf the group, emotions as tightly interlocked as the five swords used in the dance: a series of turns, jumps and clogging steps intricate as Celtic knots. Was the victim the intended target, or should it have been someone else? In the course of the CID investigation, a mysterious 17th century puzzle is discovered. Does it hold a clue to the murder? Detective Brenna Taylor and her colleagues have more than enough to worry about. But unbeknownst to her, career criminal King Roper has escaped from prison where he was serving time for murder. Now free and eager to settle the score for his capture, Roper tracks down Brenna’s whereabouts, ready for revenge...

“We’re forgetting that little poem or whatever it is that the lads found at Alastair’s house.”

I nodded. “It read like something out of Shakespeare.”

“What if it came down through Alastair’s and Simon’s family?” Mark began speaking more quickly, but he held his voice low. “What if Alastair and Simon were searching for something?”

Graham put the marker down beside him. “Like what?”

“Look.” Mark held up his left hand and ticked off the items on his fingers as he spoke. “Even though Simon denied it at first, we learned that both cousins were delving into genealogy. Mary confirmed Simon’s interest in the subject when she told us she would ask Simon to help her with her own research.”

“That bit of poetry found at Alastair’s house sounds ancient, like 1700s or something. That ties in with ancestral research, if that’s what Alastair and Simon were doing. Why else would he have it?”

“Could that be one of those love poems that Declan sent his girlfriend?”

Margo said the poem on Alastair’s desk didn’t sound at all like a love poem. “Anyway, why would Alastair have it if it was sent to Jessica?”

“Good point, Miss Lynch.” Graham leaned forward, his forearms on his thighs. “What about Alastair’s writing prowess? Do we know if he could write? I ask because I’m thinking back to Cyrano deBergerac. He wrote love letters for his friend. Maybe Simon was trying to counter Declan’s love poems with one of his own, but Simon didn’t have the knack, so he asks Alastair to write one for him.”

I frowned and Graham asked me what was the matter. “I’d believe it, sir, if Alastair’s poem was sugary, but that thing is so cryptic. I don’t think Jessica and Simon were together long enough to warrant such an obscure message. Anyway, a man wouldn’t write his love like that these days, would he? Why not just say ‘I love you forever’ and put it with a dozen roses? I think that’s a non starter, if you’ll forgive me.” 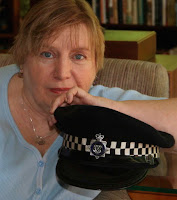 A month-long trip to England during her college years introduced Jo to the joys of Things British. Since then, she has been lured back nearly a dozen times and lived there during her professional folksinging stint.

Jo’s insistence for accuracy--from police methods and location layout to the general “feel” of the area--has driven her innumerable times to Derbyshire for research. These explorations and conferences with police friends provide the details filling both her Peak District mysteries and the McLaren mystery series.

In 1999 Jo returned to Webster University to major in English. She graduated in 2001 with a BA degree and departmental honors.

Jo lives with her cat, Tennyson, and way too many kilts in the St. Louis-area.

Jo A Hiestand will be awarding a $30 Amazon or B/N GC to a randomly drawn winner via rafflecopter during the tour.