Cheryl Holt, author of A Summer Wedding at Cross Creek Inn on her journey to becoming a writer

Not every author shares the same path to becoming a writer. Today, Cheryl Holt, author of A Summer Wedding at Cross Creek Inn, share her journey and an excerpt from the book. Be sure to follow the tour for even more! Best of luck entering the giveaway. 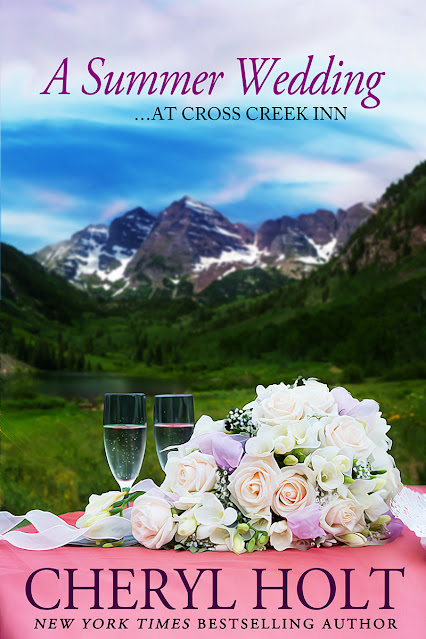 From New York Times bestselling author, Cheryl Holt, comes a sparkling, fast-paced novel about the complexity of family—and all the ways they can drive us crazy.


The lavish Layton-Benjamin wedding promises to be an event to remember, and the groom’s wealthy parents have spared no expense to impress their guests by hosting it at the exclusive Cross Creek Inn, a private mountain retreat tucked away in the heart of the Colorado Rockies. But the bride and groom are from completely different backgrounds, and they’ve only known each other for a few months, so it’s been a ‘hurry-up’ engagement that has everyone worried.

When the groom arrives late and tempers start to flare, it’s clear the wedding is a minefield that has to be carefully navigated. As parents and friends begin taking bets over whether the happy couple will make it to the altar, secrets are revealed, new loves emerge, and true happiness is finally found.

Book your visit to the Cross Creek Inn! A witty, fun summertime story about family, friendship, and finding out what matters most—that only Cheryl Holt could tell.

The view out the window of her suite was spectacular, and Sharon was trying to enjoy it. She was surrounded by thick, verdant woods, and off in the distance, stark mountain peaks rose, seemingly to the stratosphere. Even though it was mid-July, they were dotted with snow.

She’d never been what might be described as a mountain person. Being a typical Californian, one who’d been born and raised in Los Angeles, she’d had her auras read and her chakras aligned and her pores opened. She was a water person, and she lived on the beach in Malibu where she could stare out at the ocean.

Still though, the Colorado scenery was beautiful, and she had to remember that it was and focus on that fact. It was awfully quiet though, and the silence would take some getting used to. In Malibu, with its lone highway that was constantly clogged with cars, there was always a hum of traffic. It was a regular drone that never ended.

She wondered if the serenity and isolation might gradually drive her crazy, but then, she was staying in Colorado for four short days. She could endure any torment for four days. Couldn’t she?

On Sunday morning, after Eric and Jennifer departed on their honeymoon, she would head back to California, and the appalling weekend would be over.

As the mother of the groom, she should have been more excited, but she couldn’t muster the necessary enthusiasm. Initially, she’d decided she wouldn’t attend, but friends had nagged until she’d changed her mind. So…here she was, but she wasn’t glad about it, and she had to alter her mood, bury her misgivings, and forge on with a positive attitude.

I had two kids back-to-back when I was 38 and 40 years old, so my husband and I decided I would stay home with them. It meant we lost my income, so I needed to do something at home where I could begin earning money. I’ve always been a very clueless person, and I had always wanted to write a novel. I thought I would have plenty of “free” time while I was loafing at home with two little babies and that it would be the perfect time to begin writing.

I spent four years lurching around and struggling to learn how to put a manuscript together. I’m a lawyer, so I wanted to be a suspense writer, and my early attempts were all suspense manuscripts. But that market is extremely competitive, and I didn’t know what I was doing, so my writing was pretty awful. (I didn’t know it was awful!) When I hadn’t sold anything after four solid years of constantly working at it, I decided I had to try something different, and I switched to romance. It’s a massive market, and the contemporary end of it is really hot, but I’m a historical fiction fan, so I was drawn to the historical end of it, which has a much smaller audience.

All of a sudden, a dam seemed to burst. It turns out I have a great knack for writing love stories. Who knew? I sold 5 books on my own—in a little more than a year—to a major New York publisher that specialized in romance. I thought I was set, that I had finally “made it.” But before the first book was out of production and ready for sale, the publisher decided to shut down the line I was writing for, and I was dropped. I talked to my editor and said, “But my first book isn’t even out yet. Can’t you wait to see how it does?” And she said, “We don’t need to wait. We know how it’s going to do.”

By then, I actually had an agent. (When you sell your own books to get yourself started, agents are always interested in you then.) He said my historical career was over, that my publisher had dumped several hundred historical romance writers out on the market, and I wouldn’t be able to find a new spot with another company. This was in 2000, and he advised me that there was a new trend starting. It was being called ‘erotic historical romance’. Apparently, the books were hard to write, but all the publishers were looking for them. If I could write a hot, sexy love story, we’d have a hot property to offer.

Without much thought, I agreed to try, and I penned what would become my signature novel that was titled, LOVE LESSONS. After a year of trying, and dozens of companies considering and rejecting it, we sold it to a big NY publisher. It was a life changing event for me, and I wrote thirteen erotics for them. I actually became known as, “The Queen of Erotic Romance.” My agent had been correct that it would be a hot market trend. It’s still going strong today in 2021. I didn’t like writing them though. As the years rolled along, as writers pushed the envelope, the subgenre grew very pornographic and the books were no longer simply sexy, fun love stories.

My publisher wouldn’t let me write anything else though, or tone down the temperature, so I left them and went to another NY publisher. They promised to let me go back to writing historical love stories. It’s what I love to do and where I’m strongest. I delivered the first book, of what was supposed to be a 3-book deal, but my editor hated Book #1 and I could never rewrite it sufficiently to get her to accept it and send it into production. After a year of trying, I withdrew it, and the contract was terminated.

This was autumn 2008. The next morning, I got up, and the world economy was collapsing. And I didn’t have a publisher. I had another agent by then, and she was able to wedge me in with my fourth NY publisher. We signed a three-book contract in January of 2009, and they paid me a price that was appropriate for 2007 books. Yet as we moved through 2009, and I was writing the novels, the publishing industry collapsed and all of the bookstores closed. When the books came out in 2010, all of the mall stores like Waldenbooks, where my paperbacks were sold, had closed. My publisher took a huge loss on the books, wrote them off as a loss, and I was let go yet again.

I took the economic collapse personally. I felt as if the universe had crashed the whole world just to force me to admit I would never succeed at writing. I quit for two years. I took down my web page and shut off my email. In 2010, I worked for the Census. Then, in 2011, I was mentoring a guy who was aghast to hear that I had quit writing. Amazon had started self-publishing, and many other on-line booksellers were doing the same. He offered to design a cover for me if I would start over, and after months of nagging, he dragged me, kicking and screaming, into publishing my own novels.

In 2012, I released my “Lord Trent” trilogy. The books are LOVE’S PROMISE, LOVE’S PRICE, and LOVE’S PERIL. They are my bestselling books so far, and they pushed me into the Amazon “Top 100” bestseller list. So…

I kept self-publishing. I do it all myself now, and I have been doing it for nine years. I wrote 24 novels for the NY publishers, and now, I’ve published 36 on my own. My new contemporary novel, A Summer Wedding at Cross Creek Inn, is available now, and I’ll have another 3-book historical romance trilogy out in August, 2021.

Every day of it has been hard. When I was dealing with those big NY companies, I suffered some of the most traumatic days a human being could suffer. But I persevered, and I kept writing. I always knew, deep down, that I was a really good writer. Sometimes, I lost sight of that fact, but I never quit. And now, every time I release a new book, I am reminded that I am the walking-talking example of an American success story. If you haven’t ever tried one of my books, I hope you will!

CHERYL HOLT is a New York Times, USA Today, and Amazon “Top 100” bestselling author who has published over fifty novels.


Cheryl Holt will be awarding an autographed print copy of the book (US ONLY) to 10 randomly drawn winners via rafflecopter during the tour.