A Conversation with Michael Leon, author of Chandelier

Welcome to the tour for Chandelier by Michael Leon! Today he is giving us a detailed explanation of the importance of research when writing a novel. We also get a sneak peek inside his book with an excerpt. If you want more, be sure to follow the rest of the tour! And best of luck entering the great giveaway at the end! 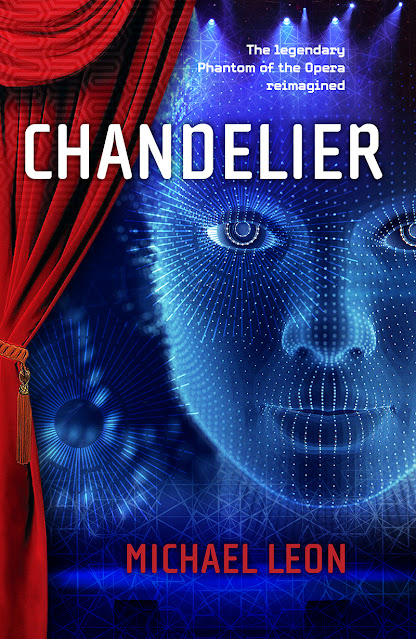 CHANDELIER is the genre-bending sci-fi/fantasy-romance novel follow up of Michael Leon’s 2019 fantasy-romance book, PHANTOMS. A century has passed since the fabled Phantom ruled the Garnier Opera House. Technology has advanced, and AI has evolved beyond human knowledge. They reside in a virtual Earth, free from the ravages of an environmentally damaged Earth where humans and post-humans live under AI’s qualified governance. CHANDELIER follows one AI sentient’s journey, Benny, whose loyalty for a famous opera singer, Madame D’Arenberg, sets him on a dangerous course, entangling him in The Phantom of the Opera’s deadly web.

The twilight between tired revellers and early morning risers had become Erik’s refuge, a place where the pains of past and present could coalesce in his ritual of the macabre. He’d dreamt of his tormentors again, beasts controlled by masters who understood their canine's savagery as intimately as a mother knew her child and recurring nightly, taunting his mind.

Chilly breezes flowed down from the Lepontine Alps, carving patterns across Lake Como, so he drew his coat closer, protecting all but his face, but he wouldn't feel an arctic breeze there. He touched his pale cheeks, not to warm them for they were permanently cold, an immovable party mask. Instead, he felt the rough texture of the implanted skin, grafted to his face. Habitually, he reached into his coat pocket for a medicated ointment that soothed and camouflaged his face in equal measure.

A single boat predictably made its way toward the Bellagio port, the first for the day, in wait for the steady procession of commuters and tourists that would navigate the Lombardy region, Italy's foothills to the Swiss alps. The light from the slow-moving boat cast a darker than usual spotlight on the famous U-shaped lake, lit by its twin light, a crescent moon. It took Erik back to a dark past when he ruled the Garnier from the recesses of its famous lake chamber. His rule was cut short through carelessness, a mistake he would not repeat. He’d return to the jewel of the opera crown and rule that grand world again, but this time he'd lead it from the stage rather than Garnier’s hidden lake.

Were similar dark secrets contained in the black depths of Lake Como? The thought made him grimace, drawing pain. He held his mouth and cheeks, soothing the scar lines camouflaged beneath a thick beard. The scars, like his name, Erik, were all that remained of his past life, contingencies needed to protect him from those who’d seek to destroy him.

This week we ask the author - what is the importance of research in novel writing?

Research is a crucial component of the writing process. Given Chandelier is a follow-up novel of my 2019 book, Phantoms, I had already done much of the research.

There are two levels of research, secondary and primary. For example, in my previous career in international business, I'd research as much as I could about the country and its markets before travelling there to carry out field interviews with business operators. I use much the same process for fictional writing.

Secondary Research: To write Phantoms, I researched and read the many adaptions of the famous tale, as well as the original novel, The Phantom of the Opera, by Gaston Leroux. There were film and theatre versions to review, which were far more dramatic than the original book, but Leroux's work remains uniquely creative.

I also use Verdi's opera as the backdrop of my novels, so I had to research Verdi's work before deciding on the appropriate operas. I used Macbeth in Phantoms and decided on La Traviata in Chandelier, as the story revolves around the sacrifice of the female lead, Violetta.

Primary Research: This was the fun bit! Long before writing Phantoms, I lived in France for three months, spending equal time in Bordeaux, Lyon and Paris. As a francophile, I enjoyed living among the French and experiencing their unique culture. I was invited to an opera at the Garnier in Paris and never forgot the experience. It is a stunning opera house filled with history, stunning architecture and, of course, the stories of the famed opera ghost, making for an unforgettable experience. It left an indelible mark on me, so much so, I co-wrote Phantoms as a tribute to the occasion. I also have a picture of that visit containing the Phantom's signature. I believe he appeared with me in a photo taken of me in the Garnier, but I'll let you decide! Can you see the shape of the Phantom's face on my shirt?

Michael Leon is an explorer, writer and author of the new novel, Sentient. Professionally trained in international trade, Michael has spent the last decade reading and writing SFF novels about new worlds to be explored in the future. His latest work, Sentient, imagines Earth in the year 2120. His next novel, Chandelier, will be released in 2022. Michael has travelled extensively around Europe, walking the paths of his characters, from the famous European opera houses in Phantoms to the mountain tops of Switzerland in Emissary.

One randomly chosen winner via rafflecopter will win a $50 Amazon/BN.com gift card. Follow the tour for more chances to win!
a Rafflecopter giveaway
Posted by Andi at 4:00 AM