Review of The Box From Braunau by Jan Elvin 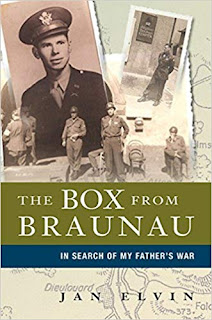 The Box from Braunau: In Search of My Father’s War is a touching tribute. Not only does it celebrate the life and legacy of author Jan Elvin’s father Bill, it also gives honor to the men who fought in WWII and celebrates the prisoners of the concentration camps they liberated.

All through Jan Elvin’s childhood, she and her siblings were warned to be careful around their father. They were especially warned to never be close-by when waking him, as he may attack. He was anxious and controlling. He often appeared apathetic to his family and their needs. What they didn’t know then, was that he was suffering from Post-Traumatic Stress Disorder, or PTSD.

Jan Elvin had a somewhat strained relationship with her father, as he seemed incapable of really opening up to anyone. Then, a few years before he died, Jan stumbled upon a familiar box from her youth. It was a metal box, upon the side of which read “Braunau 1944”. When she questioned her reticent father about its significance, she discovered that he had been a part of a regiment that freed a slave labor camp in Braunau, Austria. He received the box from a prisoner out of gratitude.

Bill Elvin also revealed that he had witnessed first-hand the atrocities of the concentration camp Ebensee. Desperate to discover more about her father’s experiences, which were too painful for him to articulate, Jan Elvin began a four-year quest to find out about Ebensee and Braunau. The Box from Braunau is the result of her research.

Jan’s research literally took her around the world and introduced her to many of America’s finest, who served with her father. Through those experiences, and through her father’s journal, she was finally able to paint a better picture of her father, and of the war in which he fought.

The Box From Braunau alternates between narratives of the author’s memories of her family and journal entries made by her father during the war. She supplements those entries with factual information garnered in her research. The combination of memory, journal, and research provides an insightful and personal look at one of the worst experiences of mankind.

It is an interesting read for anyone who is interested in WWII. It is also a sharp reminder to listen to your father’s stories, and to embrace him while you still have him.

Andrea Coventry is a book reviewer for Bookpleasures.com

Available on Amazon
Should you make a purchase through this affiliate link, I may earn a few pennies at no additional cost to you. Thank you for supporting my websites!
Posted by Andi at 8:32 PM
Labels: book review, history, memoir, WWII