Review of Whiteout by Brian Duren 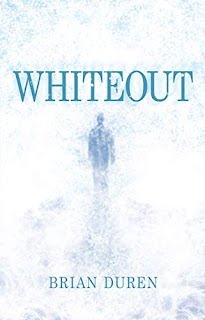 Author Brian Duren’s debut novel Whiteout is a remarkable first work. I’ll admit I had minor hesitations when starting it, as I am always wary of new writers. But I always try to keep an open mind, and was not disappointed.

The story revolves around Paul Bauer, who is a freelance journalist who fled to Paris several years prior, to escape his family. His estranged older sister, Christine, keeps calling him to return home to Minnesota, as their mother is on her deathbed. Simultaneously, Paul is plagued by a dream in which a little boy is walking in huge snow drifts. When the boy reaches the peak, he lifts off and soars....and Paul wakes up. Adding to the confusion is a Christmas card, sent to Paul by his mother the previous year, including his parents wedding announcement from 49 years ago.

When Paul’s mother finally passes, he obligingly returns stateside, sans girlfriend Claire, to attend her funeral and reacquaint himself with his family. In addition to Christine, he has an older brother, Fran, whose infamous mood swings can erupt into unpredictable rages. And then there is Stone, whose actual relationship with the family remains fuzzy in Paul’s mind.

All Paul has ever known about his father was that he was lost in a snowstorm whiteout thirty-five years ago. He has little to no memories of the man, yet is curious about him. A cryptic conversation with his mother’s long-time friend, Ruth, and stumbling upon ripped-up photographs in his mother’s closet, propel Paul to search for the truth about his family, no matter what he may discover.

The novel is full of long descriptions of Paul’s surroundings. At first one questions the necessity of such descriptions, but then the purpose is revealed. As Paul takes in every detail around him, he is also processing any new information he may receive via provoked memories or conversations with others. Many of us also become hyper-aware of small details in our environment when we are entrenched in deep thought.

Much of the story is also told through dialogue between the characters, which reveals their personalities without an omniscient narrator being responsible for doing so. This makes them a little more believable.

The story is fluid and a desire to keep up on Paul’s discoveries keeps the pages turning. The inevitable twist toward the end of the book is slightly predictable, yet the change of voice and mood is jarring enough to be entertaining.

I look forward to hearing Brian Duren’s fictional voice in the future.

Andrea Coventry is a reviewer for Bookpleasures.com.

Available on Amazon
Should you make a purchase through this affiliate link, I may earn a few pennies at no additional cost to you. Thank you for supporting my websites!
Posted by Andi at 3:35 PM
Labels: book review