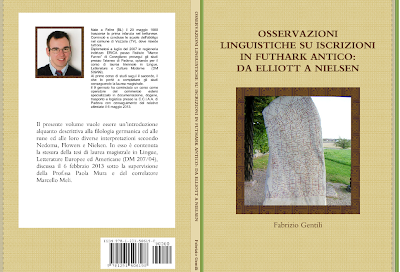 
The present volume is not intended to be a normative introduction to Germanic philology, but a somewhat descriptive one, should a definition of such work be required. The work contains the drawing up of the author's master's thesis in European and American Languages and Literatures (according to Italian Ministerial Decree 207/04), and was discussed on 6 February 2013 under the supervision of the thesis supervisor, Paola Mura, and the co-supervisor, Marcello Meli.

For the realization of such a thesis, the graduate student based his research on texts and materials suggested by the supervisor. For a comprehensive discussion of the subject, the second edition of Runes: An Introduction by R.W. Elliott (1989) was used and complemented by the Italian viewpoint in Alamannia Runica by Marcello Meli (1988), the latter having taught Gentili at all levels of his 'academic' study. It was later decided to extend the tractation to writings not essentially inherent to Scandinavian runes and, therefore, works by Christoph Bernard Rüger, Rudolph Heizmann and Hans Frede Nielsen were introduced for the analysis of the Scandinavian runes and the work of Robert Nedoma for the Alemannic (that is, those essentially of the German area) ones.

The expositive clarity of both Elliott and Meli greatly helped the author in approaching the writings of Rüger and Heizmann, as well as those of Nielsen (whose English is so correct that itt is comparable to that of a British academic author, which would presuppose a base of medieval English for the vastness of the concepts treated). On the other hand, the German of Robert Nedoma turned out to be as aulic as it is complex, in particular for the historical-technical language used. It is interesting to note how Nedoma himself at the end of his interpretations of the Schretzheim fibula relies on Meli's reasoning for the translation of the same inscription.

An aspect of Rüger's work that is particular worthy of consideration is that it is implicitly based on a parallelism between Germania Inferior (in Bayern), Vindolanda (in England) and Naples, in an attempt to determine the origin of runic writing. Without this premise, the part inherent to Rüger would have proved difficult to understand.

The reader is invited to remember that although there are three main uses of runes - magical-apotropaic, religious and merely alphabetical - these purposes are not mutually exclusive. They coexist and can be interpreted variously, according to the uses and customs of the area in which they are found.

The author does not want to impose a one-and-only interpretation. On the contrary, he thinks that the 'magical' interpretation has favoured the curiosity of some of the authors who have accompanied him in the exhaustive process of drawing up the thesis itself, and invites the reader, based on the works by Elliott and Meli cited above, to deepen the issue of the 'magical' interpretation from reliable sources. The thesis has been subdivided into two chapters. The reader is invited to read the first in order to determine which type of interpretation to prefer. This is not intended in any way to be an imposition; rather an attempt to supply a wide and neutral general overview. The second chapter revisits earlier interpretations in the light of this new work, such as Rüger's view on the spread of literacy through the military at the time, Nedoma’s and Meli’s descriptions of tombs, and Nielsen's contribution to research on Scandinavian runes, their syntax and structure, and the spread of Germanic proper names.

The book is only available at http://www.lulu.com/shop/fabrizio-gentili/osservazioni-linguistiche-su-iscrizioni-in-futhark-antico-da-elliott-a-nielsen/paperback/product-21135826.html, and comprises a full chapter about Nedoma’s findings concerning the Schretzheim fibula, as well as a 22-page final chapter in English dealing with the various view-points of every author discussed within the book: Elliott, Nedoma, Flowers and Nielsen.
Posted by Andi at 1:00 PM
Labels: book promo, Featured Fiverrs, nonfiction