Read an exclusive excerpt from 'Cardinal Desires' by Linda Nightingale 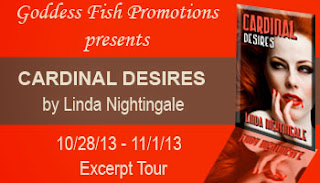 At fifteen, she fell in love with a man in a painting, and he looks exactly like that Novgorodian knight. Even though he's got the keys to her chemistry set, she mustn't succumb to his charms. She's a forensic psychiatrist working with Scotland Yard. He's a high-profile journalist who invades the underworld for a story or broadcasts live at the scene of the world's worst tragedies.

Police and media do not mix. They are both trying to capture the same animalistic killer whom newspapers have dubbed The Vampire Slayer. Modern London doesn't know that the Slayer has also killed four vampires. Katy doesn't know that Sterling is a vampire until too late—after she's fallen in love with him.


A strong hand closed on hers, and Katy knew how the sea felt at tide-turn, how a tree felt when lightning poured from the sky, and at once its roots quivered with glory and death. In the comfort of Sterling’s embrace, his body heat warming her, the need for him was hot as a fever.

Common sense presented its case. “We don’t have to be enemies. We can’t be friends.”

“Good. I don’t want to be your friend.” He wound an auburn curl around his finger and touched her hair to his lips.

The arrogance of the man! Handsome devil expected women to tumble into bed with him. She shrugged off his embrace. “Taking a lot for granted, aren’t you, Mr. Fox?”

Sweetheart. Her heart sailed over that six-foot fence.

Katy could no longer resist. She rested her head in the crook of his shoulder. He smelled of leather and a faint trace of herbal shampoo. Never had she been more aware of her body, her emotions, the wind and rain. In the shelter of his arm, she felt safe and complete.

Suddenly, she was flying.

Sterling seized her in one arm, balancing the umbrella above them, and swung her over the rain gushing across the sidewalk. He set her on her feet in the dry but didn't release her from the one-armed embrace. She gazed into his eyes as if he’d appeared from nowhere, and, in a way, his appearance was a miracle. Her warrior had stepped down from the canvas into reality. She imagined his beautiful body naked, wrapped around her, legs and arms entwined. Her heart thumped a hungry beat, echoing between her legs, her trigger tingling. Willful eyes wandered to the tantalizing shape beside his zipper.

“Katy,” he released her, took her chin in his hand, “you can’t hold this line much longer.”

The cold truth drilled through her heart. “You’re too accustomed to getting your own way.”

“Wrong again.” The passion in those smoky green eyes would have knocked her socks off had she been wearing socks.

Her breath froze in her lungs. He didn’t seem to be breathing. The world jolted along its way as two strangers stood in the rain and tried to deny the most natural of human needs.

“Sometimes,” the thought escaped her, “I feel as if—”

“We know each other.” Lips parted, he bent to kiss her.

If he kissed her, she was a goner. 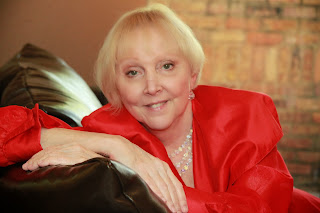 Born in South Carolina, Linda has lived in England, Canada, Miami, Atlanta and Houston. She’s seen a lot of this country from the windshield of a truck pulling a horse trailer, having bred, trained and showed Andalusian horses for thirteen years.

Linda began writing in high school when her favorite English teacher, Mrs. Burriss, allowed her to submit a short story instead of a book report. She also wrote very dark poetry brimming with teenage angst. These she showed to an editor at the local newspaper and was promptly shot down. Thereafter, she put her pen away until 1992 when she began a vampire novel which became Sinners’ Opera.

With Cardinal Desires, she won the Georgia Romance Writers Magnolia Award and received a call from Berkley. The publisher didn’t publish vampires (at that time) and asked if she had anything else. Novice that she was, she said “no” rather than asking what they wanted!

She works in the legal field and has two wonderful sons. She loves Andalusian and Lusitano horses, her snappy black convertible and her parlor grand piano—and writing, of course. Visit her web site for a free vampire story starring Morgan D’Arcy, the hero of Sinners’ Opera and a member of the supporting cast in Cardinal Desires.