'The Vanished Lady' by Loretta Jackson and Vickie Britton 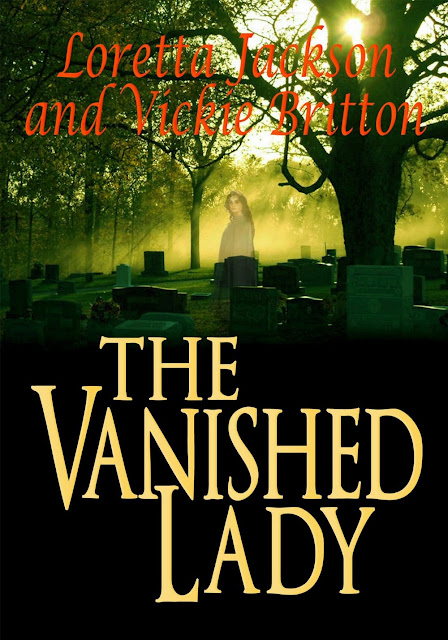 Dana Lawrence doesn’t imagine when she buys the quaint Victorian house in the remote mountains of Colorado that her life will soon be in danger. She has heard the legend of Lelia Glenn and how she vanished in the 1800’s, but no one told her about the more recent disappearance of Amy Walden two years ago.

On the night of her arrival, Dana spies someone digging on her land. The sheriff tells her that on the day Amy disappeared Glenndale’s jewelry store was robbed. Amy’s boyfriend, Donnie Thorpe, is still on the run, and his accomplice, Jed Hoyt, has just been released from prison. Bennett believes a third party masterminded the robbery--her handsome neighbor, Logan Rand.

While Dana tries to beat the thieves to the stolen goods, she uncovers a grave. Threats and attempts on her life follow in rapid succession. Dana must identify the killer before she becomes the next vanished lady.

...My new home. Her heart sank as she realized the enormity of the task she had taken on so impetuously. Her gaze wandered over the faded wallpaper, the water stains on the ceiling, the threadbare carpet. Everywhere she looked she saw major repairs that vied for immediate attention, repairs that would in the end call for much more money than she could access.

But on the bright side, Dana could tackle most of the work alone, only hiring an electrician or plumber when necessary. She would definitely need help repairing the badly damaged floor near the staircase. Once more she felt overwhelmed, as if she had set for herself an impossible goal no one person would ever be able to accomplish. But she had no choice other than to succeed. For better or worse, the Vanished Lady Inn now belonged to her.

Because of the deep silence, the sudden creaking of boards outside the front door caused her to start. She froze for a moment, thinking of the blackness of the night, of the total isolation. Footsteps sounded across the porch, then ceased.

She approached the door, her gaze falling on the tall, shadowy outline of a lone man.

My sister and I have always loved to explore historic homes, and in Colorado we came across many lovely houses called "Painted Ladies". The term "painted lady" has a double meaning. It is used to refer to "soiled doves" or fallen women of the Old West, who painted their faces as opposed to respectable women who did not use cosmetics. Though the terms are unrelated, houses of that same era which are painted in a multi-colored scheme, the showy peacocks of architecture, are also referred to as "Painted Ladies". Many of these historic homes throughout the United States have been remodeled and turned into bed and breakfasts. And most of them have a tragic tale or a ghost or two. This fictional tale set in Colorado centers around such a secret.


Vickie Britton and Loretta Jackson are a sister/co-authoring team whose over forty novels include mysteries, adventures, westerns and romantic suspense. They love history and travel, and visit each setting used in their novels. They have co-authored the eight-book Ardis Cole Mystery Series, The High Country Mystery Series, and many single suspense titles.