Desired by the Phantom by Jennifer Deschanel 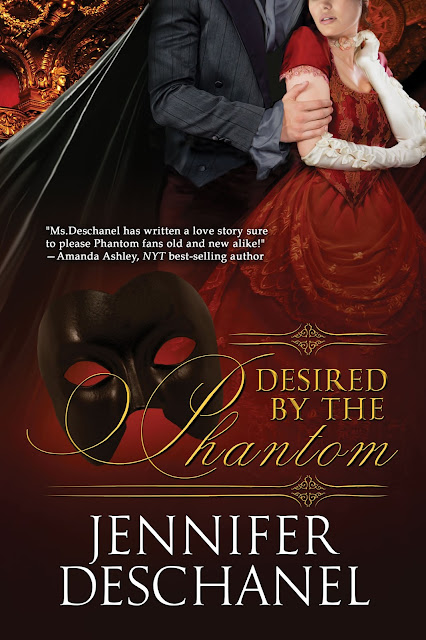 Desired by the Phantom

Proving the mask isn’t hiding a madman is probably hopeless, but preventing his past from destroying their love—may just be impossible.

Four years ago Paris was under siege by Erik the murderously vengeful Phantom of the Opera, who swore no one would come between him and his student, the breathtaking Christine Daae. But a broken heart and a blast of conscience have changed him. Vowing never again to let his curse haunt the diva or the Opera Garnier, Erik is content for the world to believe he is dead. That is, until a good Samaritan begins leaving strange packages, awakening both his deepest desire and most forbidden fear—love.

Anna has no way to escape the memories of her past or her bonded servitude to the owners of the Opera Garnier. Ministering to the less fortunate is the only bright light in an otherwise dark existence. When her kind gesture brings her to the attention of the masked and mysterious Erik, her need for redemption became a desire for true acceptances. But Erik’s powerful obsession with Christine and a deadly con that puts everything she knows at risk pushes her to face terrifying choices.

Before lies and the legend of the “opera ghost” threaten the lives of any more people, Erik fights to control his demons and tame a heart torn between two women. Battling the nobleman determined to lock Erik away, Anna must help free Erik from his bonds of madness or once again seal his fate as The Phantom of the Opera…but saving him may just destroy her heart.

Available at these online stores:

If one is going to query a publisher, Jennifer suggests not doing so in pink ink. Her first, written when she was twelve, was nothing if not colorful. She is a member of the Romance Writers of America in addition to being a writing mentor. Her passion lies in writing historical romances from forgotten pieces of history. In addition to her series expanding Leroux’s The Phantom of the Opera, she writes romances set in the Regency and Victorian eras.

Writing from a tiny French nook, Jennifer admits to being country mouse with city mouse tastes and is constantly fighting to keep the little critters in line. She firmly believes in OCD awareness and organizations that support mental health research, and her books often explore such challenges. She can’t pronounce pistachio, hates lollipops with gooey centers, and thinks watermelon is the spawn of the devil. Most of all, she dearly loves to laugh. When not writing she enjoys spending spends time in the kitchen with her daughter, digging through antique stores for a quirky find, and entertaining the whim of her mischievous pug. Turns out, the pug has her well trained.

If asked for her motto, Jennifer points to the following quote upon her wall: “Because I love you, Love, in fire and blood!” ~ Pablo Neruda