How the Little Flame Series by Melissa Lummis was born

Today I am so excited to have my friend Melissa Lummis on the blog. You may have heard about her Little Flames series. But you may not have known how it came to be. It's an interesting story.


Hello! My name is Melissa Lummis and I write Paranormal Romance and Urban Fantasy. A big thank you to Andi for inviting me to write a guest blog today! I’d like to share a little bit about how my current series, the Little Flame, got started.

I’m often asked where my book ideas come from and the short answer is from my own experiences and a little bit of magic. When you write Urban Fantasy, that answer tends to raise eyebrows. Have I experienced the paranormal? Well, maybe. But there’s so much more to fantasy novel writing, and there’s all kinds of magic, isn’t there?

For example, there’s how a story idea gels into an actual book, and it definitely felt like magic when the Little Flame series finally came together for me.

I had an idea, about a healer looking for the reincarnation of a lover who could solve a magical problem, bouncing around in my head for months, but it felt vague. I needed a theme. I needed a setting. I was soooo frustrated.

The reincarnated lover could be anywhere. Literally. So where did I want my story to take place? Where did I start? You can see the problem I faced.

But as it turned out, the problem of setting became the magic ingredient that brought everything together, including the theme.

As I often do when I have a writing problem, I headed out to have some fun. I went to Washington, D.C. for a concert with friends at the 9:30 Club. As we jumped on the Metro (D.C.’s subway) after the concert, it occurred to me that my main character could be on tour with a band! Yeah!

I’d just seen one of the most spectacular EDM (Electronic Dance Music) DJ shows of all time so what if my main character was working at the 9:30 Club when she meets a DJ named Maximillian who hires her?! And ooooh! What if I called the first book Nine30??? And each title would reference a concert venue???

It all popped in my head! (I’ve been to a lot of concerts in a lot of cities). And this way she’d be traveling all over and have a better chance of finding this reincarnated lover, plus a steady paycheck. Bonus!

And the clincher was something that caught my eye as I ascended the escalator out of the Dupont Metro North entrance, something that hadn’t been there when I lived in D.C. many years ago. In 2007, a portion of Walt Whitman’s poem The Wound Dresser was inscribed on the wall that surrounds the entrance. When I saw it, my mouth dropped open. Here was my cosmic sign. I decided right then that my overall theme for the Little Flame series was healing yourself by healing others and, well, here’s the inscription:

Thus in silence in dreams’ projections,
Returning, resuming, I thread my way through the hospitals;
The hurt and wounded I pacify with soothing hand,
I sit by the restless all the dark night – some are so young;
Some suffer so much – I recall the experience sweet and sad…


And thus, a story was born. And that in itself is magical.

Have you been to any of the concert venues I mentioned? Take a look at the other titles in the series and see if you can guess the venue they reference. 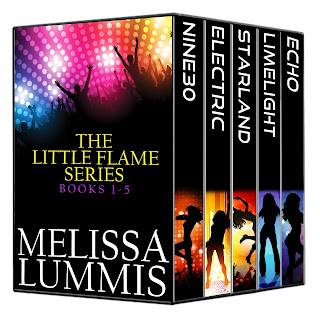 Fiamette Jurato is on a mission: to fix her broken past. She’s teamed up with the world famous DJ, Maximillian, to search for the ex lover who can help her put all the pieces back together. There’s only one problem: he’s been dead for over two hundred years.

As a healer to the supernatural, she’s no stranger to navigating the impossible maze of magical complications. But getting lost in the magic isn’t the problem; finding her way back home is.

Melissa Lummis writes new age suspense in a fantasy setting, but her stories are also straight up, steamy adult romance. The Love and Light Series is currently available at Amazon exclusively, as well as the Little Flame Series, a spin off focusing on the character Fiamette from the Love and Light world.

Melissa considers herself a truth seeker and a peaceful warrior, in addition to a paranormal and fantasy author. With too many interests for her own good, she has rarely been content with one vocation. Her first professional life was as a high school English teacher, which led to another incarnation as a wife and an instructional designer /technical writer. After starting a family, she found herself reincarnated yet again as a mother, yoga instructor, and personal trainer.

While all her past lives have contributed to who she is today, yoga has become a part of how she gives back, maintaining her Registered Yoga Teacher status with Yoga Alliance so she can help people one-on-one to overcome physical limitations and heal themselves. But she has always been and always will be a writer. She’s authored dozens of wellness articles for various publications, as well as maintains a blog focusing on wellness, healing, and living a life on purpose.

A Yankee by birth and a Penn State graduate, she lives in rural Virginia with her husband, two children, an Alaskan Malamute, and a myriad of forest creatures. Melissa believes the universe conspires to help an adventurer, and if we live our lives as if it is a daring escapade (and it is!), then everything we need will find its way to us.