Review of The Boyfriend Swap by Meredith Schorr

This post contains affiliate links. If you use them, I may earn a small commission. 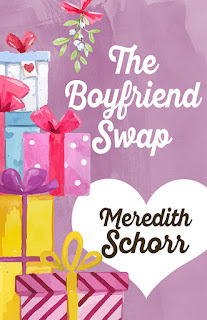 Is Christmas really the most wonderful time of the year? New Yorkers Robyn Lane and Sidney Bellows aren’t so sure. Robyn has always dated struggling creative types. For once, her parents would love her to bring someone with health insurance and a 401(k) to their Chrismukkah celebration. Her actor boyfriend doesn’t qualify. While across town, Sidney’s professional life already belongs to her parents. She’s an attorney at her father’s law firm and she works tirelessly to keep her love life private. If she brings her lawyer boyfriend to their annual Christmas extravaganza, her parents will have the wedding planned by New Year’s Eve.

A mutual friend playfully suggests they trade boyfriends for the holidays. The women share a laugh, but after copious amounts of wine, decide The Boyfriend Swap could be the perfect solution. This way, Robyn can show off her stable attorney boyfriend and Sidney’s high-society family will take no interest in her flaky actor beau.

It’s a brilliant plan—in theory. In practice—not so much. When Will turns out to be the boy-next-door Robyn crushed on hard throughout her teenage years, and Sidney’s family fawns all over Perry like he’s an Oscar-winner rather than a D-list wannabe, one thing is certain: The Boyfriend Swap might just change their lives forever.

When my mom stood up and brought her dishes to the sink, I allowed myself a small breath. Dinner was almost over. Once my parents retired to their rooms, they’d leave us alone for the rest of the night. Perry could watch television in his room or listen to his music collection. I wanted to call Will and see how things were going with Robyn.

My mom turned away from the sink. “I have an idea. It’s a Wonderful Life is on television tonight. How about the four of us watch it?”

“I’m sure Dad has work he needs to do tonight. Right?” I turned to my dad, certain he’d never choose an old movie over work.

He stroked his chin. “A two-hour break wouldn’t kill me.”

I gripped my wineglass like a vice. What was happening here? I brought home an artist whose resume wouldn’t even qualify him as an actor on the D-list, and not only was my mom encouraging our relationship, but my dad was willing to lose billable time to watch a movie with him—a film all of us had probably seen at least ten times. “I think the movie is three hours long. Besides, Perry has that script he needs to rehearse for an audition. Don’t you, hon?” I widened my eyes at Perry.

“But it can wait until later.”

I was going to kill him in his sleep.

I admit that I have been in one heck of a reading drought lately. It's not for a lack of reading material. I have that in abundance. I just haven't been into it as much lately. But once I saw the description of this book, I knew I had to read it.

It's full of all those pieces that make a romantic comedy such a joy to read. The characters get themselves into an unbelievable situation that most likely none of us would do in real life. You have two strong, beautiful women and their two hottie men. Then there are the annoying parental situations and the minor chaos that inevitably happen around the holidays.

I think there were moments when I wanted to slap each one of these characters upside the head for saying, thinking, doing something stupid. Sometimes that isn't a good thing, but in this case it was all a part of the whole story working. I was kind of envisioning the Gibbs slap on occasion. That helped me to envision it even more playing out on the big screen. Heads up Hollywood!

You also pretty much know how this whole story is going to work out. But you don't care. That's part of the fun of rom-coms, especially when Christmas is involved. I even found myself trying to imagine being in that situation. Scary thought considering my dating history!

One of the things I really liked in this story was how all four of the characters were able to grow in such a short time. Each one was not living up to his/her potential and didn't quite seem to understand who (s)he really was, let alone realizing the truth of his/her relationships with all kinds of people in his/her life. There's more depth than you initially realize.

And of course there are bonus points for the shoutout to Glenwood Pines in Ithaca, in particular their corn nuggets. Ithaca is one of my favorite places to visit throughout the year and we usually stop at Glenwood Pines on our way home. The corn nuggets are a necessary part of the meal.

So yes, this book was a delightful way to spend an afternoon and left me with a warm and fuzzy feeling. Download it and enjoy the comical escape.

A born-and-bred New Yorker, Meredith Schorr discovered her passion for writing when she began to enjoy drafting work-related emails way more than she was probably supposed to. After trying her hand penning children’s stories and blogging her personal experiences, Meredith found her calling writing romantic comedy and humorous women’s fiction. She secures much inspiration from her day job as a hardworking trademark paralegal and her still-single (but looking) status. Meredith is a loyal New York Yankees fan, an avid runner, and an unashamed television addict. To learn more, visit her at www.meredithschorr.com.


Meredith will be awarding a $10 Amazon or B/N GC to a randomly drawn winner via rafflecopter during the tour.