Money or Men by David Burnett

Thank you for stopping by this book blast tour for Money or Men by David Burnett. As always, I have an excerpt for you to enjoy before you download your own copy. Leave comments and questions for the author as you follow the tour to check out even more excerpts and reviews. And of course, best of luck as you enter the giveaway! 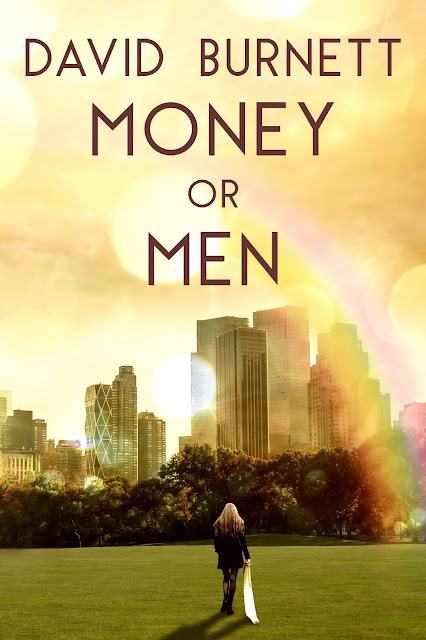 Erin must choose between the money of which she has long dreamed and the man who she has loved. Eight years ago, she chose “loot” when Chris, her former husband, competed for her hand against the god of money. Now, with a promotion within reach, she is poised to take her place among the elite of Wall Street. She will soon be working twenty-four-seven to reorganize a failing company, and she has been ordered to find someone to care for her children.

She has few options, and she reluctantly concludes she must beg Chris for help. She has not talked with Chris, written, texted, friended, private messaged, or tweeted Chris since leaving him, but if he will not keep their children for the summer, she will lose her promotion, and her dream of wealth will vanish.

Opposites had attracted when they had fallen in love. Erin remembers a Chris who was laid-back, satisfied, and, worst of all, unambitious. He seems not to have changed. He lives on a small island with no home mail delivery. He had been an author, but Erin can find nothing he has published since their split.

But Chris’s photo is the one personal item on Erin’s desk, and she still dreams of him when she sleeps. She fears if she asks Chris to care for their children for the summer, she will be drawn back into his world. She will choose Chris over money, “love over loot,” lose her drive to succeed and everything for which she has worked. Her promotion will be denied – and lightning will not strike a second time. How can she send their children to live with him without becoming entangled herself?

The night after he had consented to care for the twins, she’d dreamed she and Chris had been communicating, and she had awakened, crying out for him, her t-shirt and shorts soaked with perspiration. After a quick shower, she had spread soothing cream over her body and laid down, covering herself with the cool sheet.

As she lay in the darkness, she had begun to cry. She wanted to impress Chris.

No, she wanted him to be proud of her. She wanted him to regret letting her go, which seemed crazy, even to Erin, since it had been she who had orchestrated the leaving.

She smiled as she entertained those thoughts, then she gently shook her head, dismissing them from her mind. Even though, sadly, her dream had been her best encounter with a man in the eight years since their divorce, it wasn’t going to happen in real life. Shouldn’t happen in real life. Not now, when she was on the cusp of her dream life in New York City.

Ahead, Erin spied a bridge, and a sign told her she had reached the Folly River. She crossed the bridge onto the island Chris called home.

The business district was four blocks long and, perhaps, a couple wide, and she maneuvered the Lexus slowly down the aptly named Center Street, observing the sidewalks full of tourists and the beachwear shops, their windows full of t-shirts, catching the aroma of fried fish mixed with the smell of salt wafting in from the ocean, her ears perking to the strains of jazz drifting through the open doors of one of the restaurants. She braked at a crosswalk, allowing a woman with a barely there bikini to push a baby stroller across the street, and an aging hippie with a white ponytail to amble in the other direction. The twins’ faces were plastered against the windows.

It resembled the old beach town near her grandmother’s house, and for a moment she was transported back to her youth when she was fifteen, and she and her sisters spent a glorious summer there, free from her father’s oversight.

Stopping for what appeared to be the town’s sole traffic light, her thoughts turned back to Chris. He would be waiting around the corner, at the town’s pier. She glanced in the rearview mirror, checking her appearance, a sense of foreboding sweeping over her. Her stomach began to rumble.

Alexandra’s “communication” was not the goal, not today. After all, for years she had insisted she no longer loved Chris Stephens, and nothing had happened to change her feelings.

Beyond that, her career was like an airplane beginning to take off. She was taxiing down the runway and by the autumn, she would take flight. There was little space in the aircraft for children. A boyfriend, let alone a husband, surely would be unmanageable.

All she wanted today, was to begin an amicable relationship with the man who would care for her children. She should be able to do that, shouldn’t she? Even with Chris?

As she waited for the traffic light to change, a police car with the slogan “Protecting Paradise” emblazoned on its bumper cruised past. Erin glanced to her left, spotting the car that had followed her when she had turned off the interstate. It was turning while she was going straight. The girl in the front seat saw Erin and smiled.

Ahead, to the left, she spied the pier.

Chris would be waiting.

“I should have taken the beer…”

Yes, this is my affiliate link. Should you make a purchase through it, I may earn a few pennies at no additional cost to you. Thank you for supporting my websites!


We recently moved to our new home near Charleston, South Carolina. Four of my books are set in Charleston, and I’ve always enjoyed the Carolina beaches. I now have the opportunity to walk on the beach almost every day and to photography the ocean, the sea birds, and the marshes that I love.

I love photography, and I have photographed subjects as varied as prehistoric ruins on the islands of Scotland, star trails, sea gulls, and a Native American powwow. My wife and I have traveled widely in the United States and the United Kingdom. During trips to Scotland, we visited Crathes Castle, the ancestral home of the Burnett family near Aberdeen, and Kismul Castle on Barra, the home of my McNeil ancestors.

I went to school for much longer than I want to admit, and I have degrees in psychology and education. In an “earlier life” I was director of research for our state’s education department.


David Burnett will be awarding a $15 Amazon or B/N GC to a randomly drawn winner via rafflecopter during the tour.