Read an excerpt from The Matchmaker's Rogue by Regina Scott 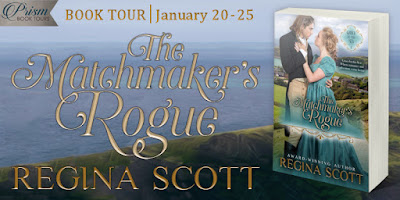 Welcome to the book tour for The Matchmaker's Rogue by Regina Scott! Today I am sharing an exclusive excerpt from this historical romance. Be sure to also check out the rest of the tour for more. Plus there's a great giveaway at the end! 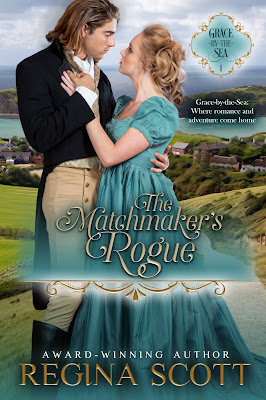 Polished Jesslyn Chance has one of the most enviable positions in the little Regency coastal village of Grace-by-the-Sea. She is the hostess of the spa, arranging introductions and entertainments and playing matchmaker to the ladies and gentlemen who come to take the waters, promenade through the shops, and dance at the assembly. But when a rogue returns from her past, Jess finds herself suddenly at sea.

Always an adventurer, Larkin Denby left Grace-by-the-Sea to right the wrongful death of his father. Now he’s back on a mission: to identify the mysterious Lord of the Smugglers who allegedly sails from Grace Cove and takes England’s secrets to France. But Grace-by-the-Sea is the perfect little spa town, run by the still oh-so-perfect Jesslyn Chance. When the village’s future is threatened, Jess must work with Lark to solve the mystery and protect the town’s own. In doing so, the matchmaker of Grace-by-the-Sea may just find that the best match for her is the rogue who stole her heart years ago.

Jess took another deep breath, feeling as if she’d been wanting air for the last few moments. What was wrong with her? She’d been pursued by two other men in the time since Larkin Denby had shaken the chalk soil from his boots and ridden away from Grace-by-the-Sea. Neither of those courtships had been successful, of course, but she’d realized that her skill lay in matching others. And she had to deal with men every day—visitors to the spa, shopkeepers in the village. None were quite that handsome, that confident, but still.

She raised her chin. “Two hours yet until tea,” she told her aunt, attempting to return things to normal. “Are you pouring today, or shall I?”

But Maudie started around the tall desk as if intent on chasing after their newest guest. “You can pour. I’ll be watching Mr. Denby. I tell you, there’s something odd about him.”

Jess caught her arm to keep her from accosting him. Such a scandal would cost them their positions, and where would they be then?

“Mr. Denby will get on with the others famously,” she assured her aunt, letting go of her cautiously. “Look, he’s talking with the general like a gentleman.” The two men chatted, strangers making idle conversation as so many of their guests did. Then Lark moved on, leaving the general smiling as he rubbed the paunch straining his waistcoat.

“Mr. Denby doesn’t fit in the spa,” Maudie argued. “He doesn’t look the least bit ill. He has no limp, no squint, no sign of a scrofulous cough.”

“Neither did most of our visitors to arrive this summer,” Jess pointed out. “Not everyone comes to the spa because they are ill.” She tidied the stack of pamphlets, noticed her hands were trembling, and shook them out. At this rate, her aunt might suggest that Jess take the waters! 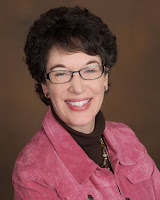 Regina Scott started writing novels in the third grade. Thankfully for literature as we know it, she didn’t sell her first novel until she learned a bit more about writing. Since her first book was published, her stories have traveled the globe, with translations in many languages including Dutch, German, Italian, and Portuguese. She now has more than forty-five published works of warm, witty romance.

She loves everything about England, so it was only a matter of time before she started her own village. Where more perfect than the gorgeous Dorset Coast? She can imagine herself sailing along the chalk cliffs, racing her horse across the Downs, dancing at the assembly, and even drinking the spa waters. She drank the waters in Bath, after all!

Regina Scott and her husband of 30 years reside in the Puget Sound area of Washington State on the way to Mt. Rainier. She has dressed as a Regency dandy, learned to fence, driven four-in-hand, and sailed on a tall ship, all in the name of research, of course. Learn more about her at her website. 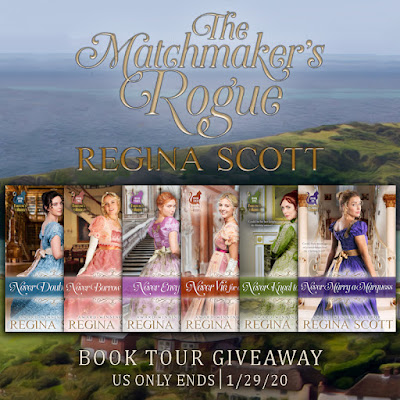 One winner will receive print copies of all six books in Fortune's Brides series (Never Doubt a Duke, Never Borrow a Baronet, Never Envy an Earl, Never Vow for a Viscount, Never Kneel to a Knight, and Never Marry a Marquess)