Read an exclusive excerpt from Into the Devil's Den by Ellen W. Martin

"A tangled tale of suspense, murder, and treachery." Get lost in this suspense thriller, Into the Devil's Den, with an exclusive excerpt courtesy of author Ellen W. Martin. Be sure to download your own copy and then follow the tour for chances to chat with the author in the comments section and also to enter the great giveaway! 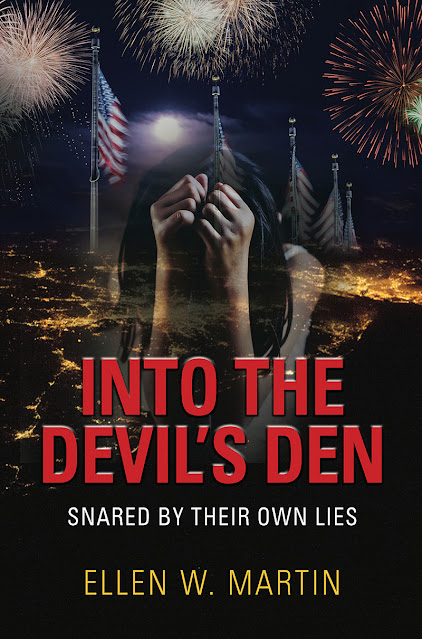 For twenty-years Sam Steele lived with a lie gnawing at his conscience — for twenty-years his only child believed her mother was dead. Without warning his ex-wife springs from the ashes of the past and reaches out to him in his capacity as a veteran Immigration Custom Enforcement agent.

When Sam’s ex dumps a father’s living nightmare into his lap, he must choose between doing his duty as a law enforcer and jeopardizing his cherished relationship with his daughter. Circumstances beyond his control leave him no choice. Before he can seek forgiveness, TERRI ANNE disappears. Sam neglects his duties as an ICE agent and becomes obsessed in finding her. In the wake of his search he unravels a trail of murder, illegal Green Card marriages, and unveils a jihadist’s plot to launch a terror attack on American soil.

INTO THE DEVIL’S DEN – SNARED BY THEIR OWN LIES weaves a tangled tale of suspense, murder, and treachery. Each twisted circumstance is triggered by that one well-intended lie Sam Steele told his child — a lie that mushrooms into several more falsehoods and leaves multiple lives dangling by a single thread. The daunting task of facing the truth and the race against time pushes ICE agent Sam Steele’s integrity to the limit.
Read an exclusive excerpt:

Sam started to open the gate. He paused at the sign — Beware of Dog. He scanned the yard. Not seeing an animal, he moved cautiously toward the trailer. Half way up the brick walk ferocious barking made him take a step back. For a moment he stood frozen in place until he realized the sound came from inside.

The front door opened. Sam centered on a snarling black beast behind the screen. His eyes slowly moved upward to the person restraining the creature. A petite woman with spiked raven hair and a nose-ring eyed him suspiciously.

“Miss Perkins...Vonda Perkins? Could you spare a few minutes?” He could hardly hear his own voice over the barking dog.

“Shut up, Sugar,” she yanked the Rottweiler’s collar. The dog’s bark quieted to a low menacing growl. “Sorry, Mister, my dog doesn’t like strangers and neither do I.” Vonda narrowed her eyes. “What do you want?”

“To ask a couple questions,” Sam moved closer to the front door, “concerning Rashid Maroun and his cousin, Jaali Diaab.”

The features on Vonda’s face froze in place except her eyes. Her eyes darted from him to back inside the trailer. If Sam didn’t know any better, he would have sworn she’d stopped breathing for a moment.

He pressed harder. “I understand Mr. Maroun may be out of town. Would you have any idea where he might be?”

A proud wife of a retired Air Force officer, mother of one son and grandparent of three grandchildren, Ellen, didn’t start writing until retirement years, and even then she considered writing a hobby. In 2019 she published a historical fiction, SONS OF CUBA, a two book series. INTO THE DEVILS DEN is her third publication. During the early months while COVID-19 was wreaking havoc through the nation and around the world, she took the opportunity to write another suspense thriller entitled SHATTERED LOYALTIES which she hopes will be published and released sometime in 2021.

The Martin’s call the snow-white beaches and emerald waters near Northwest Florida home.
Ellen W. Martin will be awarding a $25 Amazon or B/N GC to a randomly drawn winner via rafflecopter during the tour.
a Rafflecopter giveaway
Posted by Andi at 3:30 AM
Labels: book excerpt, book promo, book trailer, giveaway, Goddess Fish, suspense, thriller