Guns & Smoke by Lauren Sevier and A. Smith

Dystopia meets western romance in this collaboration between authors Lauren Sevier and A. Smith. Check out an excerpt from Guns & Smoke and then follow the tour for even more! Best of luck entering the giveaway! 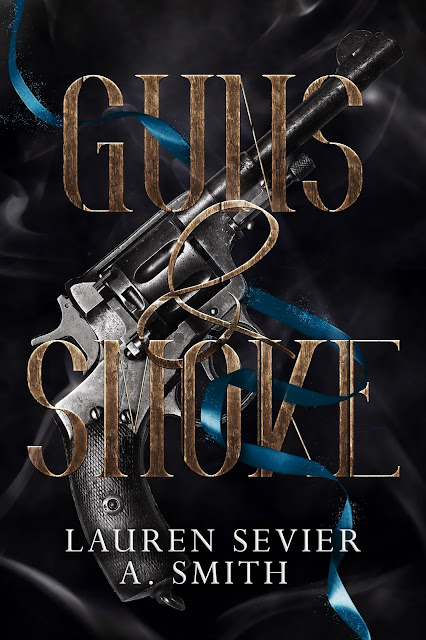 In a world where safety is a luxury and honor is found only among outlaws, two people attempt to outrun danger lurking around each corner and the tragedies that define them.

Bonnie is an outlaw on the run. Beautiful but dangerous; her dark past stalks her like the crater beasts that roam the desert. As the notoriously cruel outlaw Jones sends his henchmen to track her down and retrieve the gun she stole from him, Bonnie hopes she can stay one step ahead. Because if he catches her, a fate worse than death awaits.

Jesse always dreamed of leaving the farm to explore the ruins of the big cities. He just never imagined he’d be forced to flee after strange men burned down his rural mountain town and murdered everyone he loved. Responsible for his kid brother and searching for an uncle he’s never met before, he isn’t sure he can navigate the perils of life among con artists and thieves long enough to find him.

Their two paths collide as they find themselves thrown together on the adventure of a lifetime.

Together, they may just discover that life is about more than just surviving.
Read an excerpt:

“Those for me?” she asked. I hadn’t realized she was awake. I nodded, once again helping her sit up. I eased off the ruined dress and put the dry clothes on her as carefully as possible. I started to climb from the wagon to let her rest, but she reached out, grabbing my wrist.

“Please don’t go,” she said, her voice barely a whisper.

With a nod, I moved behind her, sitting with my back against the stolen crates. She leaned between my legs, resting her head against my chest. I brushed some of her matted hair away, pressing my lips to her temple. I held her, not tight enough to hurt her, but enough to let her know I was there.

“We can’t stay here,” she said after a while. Her voice startled me into alertness. “Coyotes are gonna come when they catch the scent of that horse.” Suddenly, I had an idea about what to do with the horse.

“We need to keep going,” she said. Neither of us moved as I sat there, holding her, lips pressed against her hair.

“Just let me hold you,” I whispered. “Just a little while longer.”

Lauren Sevier & A. Smith are long time friends and co-authors from southern Louisiana. Guns & Smoke, their first joint publication, began as a “short” story after having too much wine on girl’s night. Nine years later it is now the first novel in a Dystopian/Western Romance series. The duo has plans to publish several series together in the future. A. Smith spends her time with her two rescue dogs and rescue cat surrounding herself with books and Labyrinth paraphernalia. Lauren Sevier collects antique tea cups and tries to stay sane, though as the mother of a toddler she fails brilliantly most days. She also has a growing collection of crowns and tiaras and likes to act silly on TikTok. Look for more thrilling novels from The Fools Adventure series in the future!

Newsletter: https://abbielynnsmith.com/newsletter/
Lauren Sevier and A. Smith will be awarding a $20 Amazon/BN GC to a randomly drawn winner via rafflecopter during the tour.
a Rafflecopter giveaway
Posted by Andi at 3:00 AM
Labels: book excerpt, dystopian, giveaway, Goddess Fish, western romance