Authors often have their own rules and rituals for their writing routines. Author Bill Zarchy dares to break out of the typical mold! Check out his writing advice and get a sneak peek inside his book Finding George Washington, an interesting time travel tale! Be sure to leave questions and comments as you follow the tour. Best of luck in the giveaway! 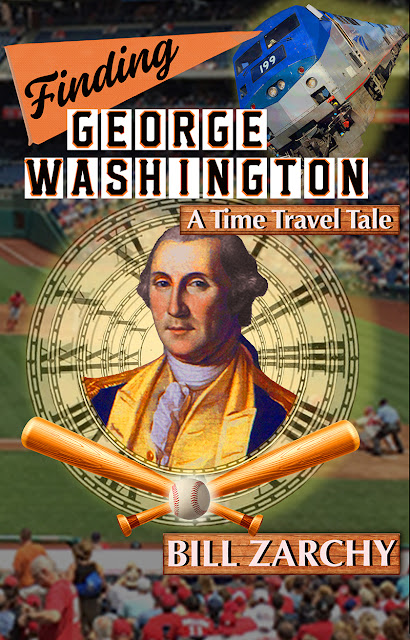 On a freezing night in 1778, General George Washington vanishes. Walking away from the Valley Forge encampment, he takes a fall and is knocked unconscious, only to reappear at a dog park on San Francisco Bay—in the summer of 2014.
Washington befriends two Berkeley twenty-somethings who help him cope with the astonishing—and often comical—surprises of the twenty-first century.
Washington’s absence from Valley Forge, however, is not without serious consequences. As the world rapidly devolves around them—and their beloved Giants fight to salvage a disappointing season—George, Tim, and Matt are catapulted on a race across America to find a way to get George back to 1778.
Equal parts time travel tale, thriller, and baseball saga, Finding George Washington is a gripping, humorous, and entertaining look at what happens when past and present collide in the 9th inning, with the bases loaded and no one warming up in the bullpen.
Read an excerpt:

Chow stopped and glanced at his watch. He looked stricken.

“Go? How can you go now? I have a million questions! Where is the time machine? Can I see it?”

“In time, Tim, I have no doubt that you’ll see it.

“I don’t have it with me,” he said, with careful sarcasm. “It’s not something that fits in your pocket.”

“What’s in the bag? Did you bring a laptop?”

“Yes, but it’s not for that. There’s something else I was going to show you, but I’ve spent far too much time explaining and not enough time planning. You’d be surprised to learn how little you really need to know.”

“Really? How could I possibly know how little I need to know, when, as it stands, I don’t know a damn thing?”

Chow shrugged. “You speak in riddles, grasshopper. The point is, for today I’ve run out of time.”

“What do we do with the General? How much danger is he in? And how about the rest of us?”

I had told Chow about Aunt Rachel’s hit-and-run “accident” and wondered aloud if it had been intended as an attack on George. I was desperate to resolve something, afraid that after this incredible tale Chow would slip away, and I’d never see him again.

“We still need to figure out what to do, Tim. The consequences of his not returning to Valley Forge are huge, as you can guess. We must get him back there. And soon.”

“Frankly, Mr. Chow, I fail to see why this is my problem. Why don’t you take him with you now?”

He smiled. “That does seem like it would be simple, doesn’t it? But there are dark forces at work, and we must sit tight for right now.”

Available in paperback and on Kindle
(affiliate link)
Just $0.99!

Rules for Correct Writing Routines
Please check out my website and blog:

The first rule for correct writing routines is that there are no rules. None that are more correct than others.

I’ve seen interviews with writers and teachers in books, magazines, and videos, where they espouse a particular routine. Gotta write every day, they say. Gotta write at the same time, in the same place, surrounded by calm. Sure.

Those admirable but arbitrary “gottas” just don’t fit everyone’s life. I wrote much of my first book while on the road. It’s called Showdown at Shinagawa: Tales of Filming from Bombay to Brazil, a memoir of my decades as a cinematographer, shooting film and video projects around the globe. A number of the 18 stories in Showdown began as blog posts from faraway hotels. Much of the rest invaded my imagination at home in front of a ballgame on TV, surrounded by kids and chaos. If I had waited for calm and a settled routine, the book would never have happened.

I don’t write every day, or at the same time. Far from it. If that works for you, great. If it doesn’t, don’t feel guilty, just grab those minutes and hours of writing time whenever and wherever you can.

That doesn’t mean all writing habits are pointless. Whenever I start a writing session, I like to go back over the last thing I’ve worked on and read it aloud. That’s how I re-engage my brain in my writing. It’s a good kickstarter for the gray matter. In fact, it’s a good technique at any point in the writing process. I often read my work aloud, to make sure it pleases the ear and flows with the rhythms of genuine speech and lucid description. I do try to avoid insipid, pointless dialogue and boring exposition.

I still write short pieces with Microsoft Word, but I wrote my debut novel, Finding George Washington: A Time Travel Tale, in Scrivener, a wonderful, highly adaptable bit of writing software from Literature and Latte. Inexpensive ($49), but immensely powerful. Scrivener makes it easy to create and edit chapters, which was perfect for me, because George ended up with 80 chapters that I had to reorder, split, combine, and monkey with several times. I don’t know how I would have done that in Word without tearing my hair out. A writer friend of mine keeps all the short pieces she’s working on in one Scrivener document and outputs each one separately to Word as needed.

Scrivener is pretty easy to master on a basic level — writing text, organizing sections, and pushing chapters around. It also has outlining functions, a way to display ideas on virtual index cards on a virtual corkboard, sections to use for character studies, and a place to plug in external research materials.

And it has massive customization controls. It’s not a WYSIWYG (What You See Is What You Get) program like Word. With Scrivener, What You See on screen is customizable for the best screen experience — perhaps wider columns, larger text, a specialty screen font. What You Get when you output a Scrivener project to Word is separately adjustable, as are many of the headings, colors, display sizes, and font choices. You’d be surprised what a difference that makes. And for an old Mac Font Head like me, it’s heaven to play with … or, uh, optimize and maximize.

The kids are long gone and peace and quiet prevail in our house now, but it took me several years to pry myself away from writing at the dining room table and take over our small back bedroom as my office. It’s a great space for me to work in my three main areas of interest: writing, photography, and storytelling. I work at a nice wooden desk with my Mac laptop up on a stand to match its height with a second large monitor next to it. I use an external keyboard in a tray attached to the desk. Next to me is a door to our deck and garden.

Over the past seven years, I wrote and edited and published my second book, Finding George Washington, from my office. Because it’s a pandemic publication, all launch parties, readings, and events to date have been on Zoom, so I’ve had to equip my office with additional lighting, an upscale webcam, and a decent mic on a small stand. Can’t have the cinematographer’s video inaudible or looking muddy, dark, or out of focus!

One more thing: privacy. My wife grew up in a household where closed doors were a no-no, so it took us years of negotiation at first to learn to accommodate each other’s needs. It’s important to me to keep my office door closed, so that I’m not too distracted by the noise of the house. I often like to play music, which screens outside sounds and sometimes aids contemplation. I prefer soft jazz like the gentler sides of Miles Davis and John Coltrane, sometimes classical music. Never anything with lyrics or other distractions.

That’s how I do it, but your mileage may vary. Whatever works for you. If you’ve got the drive to write, it takes more than just inspiration. It takes perseverance, confidence in yourself, belief in your characters and story. And many hours in the chair. So get a comfy seat, create a workspace that suits you, and develop your own “correct” writing habits.

Bill Zarchy filmed projects on six continents during his 40 years as a cinematographer, captured in his first book, Showdown at Shinagawa: Tales of Filming from Bombay to Brazil. Now he writes novels, takes photos, and talks of many things.

His tales from the road, personal essays, and technical articles have appeared in Travelers’ Tales and Chicken Soup for the Soul anthologies, the San Francisco Chronicle and other newspapers, and American Cinematographer, Emmy, and other trade magazines.

Bill has a BA in Government from Dartmouth and an MA in Film from Stanford. He taught Advanced Cinematography at San Francisco State for twelve years. He is a resident of the San Francisco Bay Area and a graduate of the EPIC Storytelling Program at Stagebridge in Oakland. This is his first novel.

Bill Zarchy be awarding a $50 Amazon or Barnes and Noble GC to a randomly drawn winner via rafflecopter during the tour.
a Rafflecopter giveaway
Posted by Andi at 3:30 AM
Labels: book excerpt, giveaway, Goddess Fish, guest post, time-travel