Welcome to the tour for Nuclear Power Nuclear Game by Helen Huang! Today I'm sharing with you an exclusive excerpt of this political thriller. Let the author know what you think and then follow the tour for even more. Best of luck entering the giveaway! 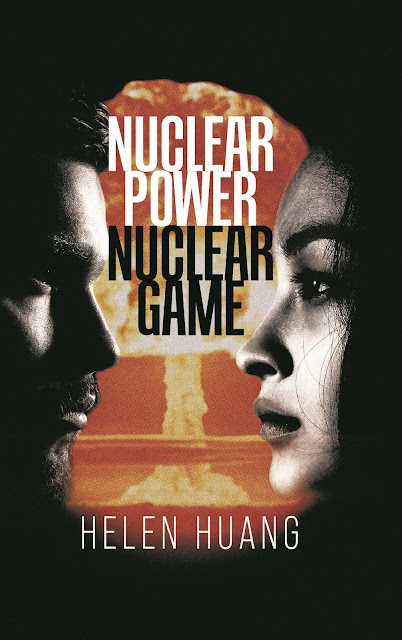 The year is 1950. Zoe and John, two young nuclear scientists from Berkeley, seem to have the perfect life, with promising careers and marriage plans. But their innocence is soon shattered when the Chinese Communist Party seizes power. Choosing to postpone the wedding and return back to her home country, Zoe finds herself locked in a political cage and separated from John indefinitely.

Caught in a complex web of revolutionary propaganda and forced to participate in dangerous research, Zoe must confront the looming question of where her true loyalties lie: with her country or with John back in America?

Set during China's march towards nuclear power amidst the political turmoil of the Cold War, Nuclear Power Nuclear Game spans multiple decades and countries across the globe to tell the story of two nuclear scientists' fight for world peace and a love torn apart by conflicting ideologies.
Read an exclusive excerpt:

Zoe and Major Liu had never had a close, loving relationship, more like two strangers accidentally sharing a room. He had no interest in her work beyond its significance to China’s defense, and she ignored his presence as best she could, except on the occasions when he demanded sex. Even then she called him Major Liu, and to him she was still Comrade Meng.

She was ashamed of her marriage, ashamed of how common and uneducated he was. The pregnancy— in fact, her entire marriage—had been difficult and demanding. At first, she had denied the fact that she was pregnant, unwilling to bear Major Liu’s child. She wore loose clothes to hide the bulge in her belly and exhausted herself with physical exertion, hoping to miscarry. But the heart beating inside her was relentless, as stubborn as she was. As she had so often before, eventually she resigned herself to the inevitable and gradually accepted the child. Perhaps it was compensation for her loveless marriage? Major Liu was stunned when she told him, eyeing her with equal parts doubt and bewilderment. Once he accepted the news, though, his usually dour face actually broke into a smile. “Let’s name the baby Xiaohong, Little Red. The child will be a little red soldier, born to defend our beloved motherland,” he exclaimed.

Xiaohong arrived a week early—a big, healthy girl—but the long, difficult labor and loss of blood almost killed Zoe. Too weak to care for a newborn and with Commissar Zhu insisting she return to work as soon as possible, she had reluctantly agreed when Major Liu proposed sending Xiaohong to Zoe’s parents in Beijing. He argued they would be able to provide a better environment for raising a child. The only comfort and meaning she might find in life was taken away. And the only link they had holding them together was gone.

Born and raised in Shanghai, Helen Huang now resides in Melbourne, Australia. Nuclear Power Nuclear Game is her first novel, inspired by her own experience living under the Communist regime and working at a nuclear institute in China.

Helen Huang will be awarding a $15 Amazon or B/N GC to a randomly drawn winner via rafflecopter during the tour.
a Rafflecopter giveaway
Posted by Andi at 3:30 AM
Labels: book excerpt, giveaway, Goddess Fish, political, thriller