If you like western historical romances, enjoy this excerpt from Lady Deception by Bobbi Smith. Follow the rest of the tour for even more. And then best of luck in the giveaway! 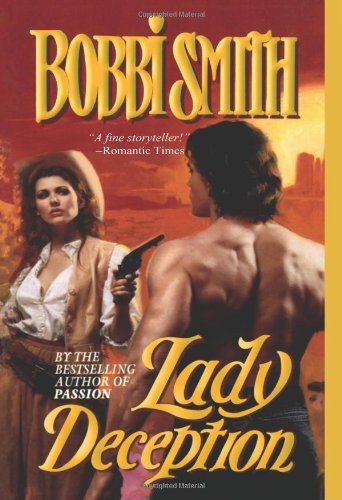 Lady Deception was the first book in my “Women Who Were Ahead of Their Times” series. All my books with Lady in the title are in this series. They feature strong heroines who are inspiring and great role models. I hope you enjoy Cody’s story. Best, Bobbi Smith

Cody Jameson—the name sent chills down the spines of every sidewinder west of the Pecos. A master of disguise, a genius of deceit, the infamous bounty hunter always had the advantage over any prey: No desperado knew Cody’s real identity—or even suspected that the tracker stalking him was a fiery beauty.

The first time Cody caught sight of Luke Majors, she was dressed as a lady preacher. But nothing could conceal the way the gunman thrilled her. Still, it wasn’t Luke’s body or soul Cody was after—it was the price on his head. And she was sure to collect the reward, if only she could convince herself a fistful of dollars was worth more than a lifetime of passion.
Read an excerpt:

Luke had time to think as he rode with Cody, and he wasn’t happy about it. Memories of the time he’d spent with her disguised as Sister Mary taunted him. He’d been protecting her, and all the while she’d been trying to take him in for the reward they were offering on him for the bank robbery! He silently laughed at how completely he’d been fooled by her act. Cody had gone to El Trajar to catch him, not to save any souls.

Luke recalled how he’d thought Sister Mary was everything a woman was supposed to be—honest and forthright, gentle and caring. He’d thought she was a complete innocent. He’d been wrong. Cody had used every trick in the book to bring him in. Disguised as Armita, she’d even used her body!

He immediately stopped at that thought. There had been no mistaking her untouched state. Memories of their lovemaking made him wonder anew just what kind of woman Cody Jameson really was. Was she a saint or sinner? A deceitful woman or a clever bounty hunter?

Luke tried to imagine that her response to his lovemaking had been an act, but he knew instinctively that wasn’t true. She’d wanted him as much as he’d wanted her.

Cody Jameson had caught him. She was taking him in to collect her reward, and then she was going to go on to her next conquest. He’d been a job to her. Nothing more.

His mood was black. The only good thing he had to cling to was his knowledge that all the time he’d spent undercover with the outlaw gang hadn’t been for nothing. He had learned that El Diablo, the leader of the gang, was a woman. When they got back to town, he would contact Jack and let him know.

With Stalking Ghost taking the lead, Cody kept an eye on Luke. When they stopped for the night, she noticed how he seemed to be in pain from his shoulder wound as he dismounted.

“Are you all right?” she asked.

“I’m worth the same to you, dead or alive. So it really doesn’t matter. You’ll get your money.” He turned his back to her.

Cody’s heart ached. She wished she could change the way things had turned out, but she’d given her word to Jack Logan that she would bring him in.

Available on Amazon
(affiliate link)
About the author:

http://www.Bobbismithauthor.com
Bobbi Smith will be awarding a $10 Amazon or B/N GC to a randomly drawn winner via rafflecopter during the tour.
a Rafflecopter giveaway
Posted by Andi at 3:30 AM
Labels: book excerpt, book promo, giveaway, Goddess Fish, historical fiction, western