Excerpt from A House Divided Against Itself

Welcome to the first stop on the tour for A House Divided Against Itself by Bob O'Connor. Here is the synopsis of the book:

A House Divided Against Itself is a historical fiction account based on a true story of four Gettysburg residents during the Civil War. Two of the characters are brothers. They fought against each other two different times during the war.  The book is based on over 90 letters from the participants and from regimental records. This is the unpublished beginning of a story for those who know of the Battle of Gettysburg may already know the ending. 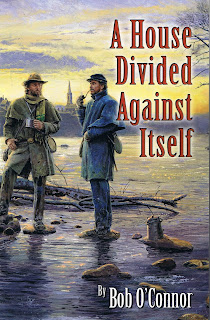 After several hours of fighting, the artillery was still hammering us. When the first rays of sunlit lit the field, Company F and others were ordered to wheel into the battle. Our orders were to attack the battery to protect our line of march. I was on the right flank with Company F and most of my friends from Gettysburg.

When the fight began, we fought gallantly. But we did not make much progress. As we charged ahead, a rebel unit surprised us by hitting our flank. We were unguarded on the flank. Our line crumbled. We were surrounded.

I looked around. Several of the Gettysburg men including myself, William T. Ziegler, Billie Holtzworth, Jacob Rice, David Culp, H. H. H. Welch and my brother Edwin were ordered to surrender.

We had talked often about this very situation. If we got captured, we intended to act like we were surrendering. We were to count silently to five. When one of our boys yelled “five” we were all supposed to run like hell. We had laughed about the plan. We thought the rebels would be so surprised that we would have a few minutes to get away before they recovered from their shock.

One of our boys yelled “five.” I started running as fast as I could. For about ten strides I thought the idea was a good one and that we were getting away. But some lucky rebel boy fired into our boys. I took a hit in my right shoulder. The ball knocked me down. I tried to get back up, but I couldn’t move. Blood was spurting from my shoulder. Billie Ziegler stopped to help.

I laid face down on the ground in intense pain. I had never felt pain like that in my life. When I looked up, everyone I saw standing around me had gray uniforms on except for Billie. The rebels boys told us we were their prisoners.

At that moment, I was not sure whether the other Gettysburg boys got away or not. We had been told that if we ever got captured, we would be exchanged for rebel prisoners within a short time.

The rebels took Billie with them and promised to send back some medical help. I was not trusting that a rebel soldier would keep his word.

As I lay there, I started thinking about the rebel soldier I had shot. Had he laid on the field and thought about home and his family and loved ones. Or had he just fallen dead.

I thought about mother and Jennie mostly. The pain increased as the time went by. Mother. When I gave you my ambrotype and said “If I fall in battle, you will know how I looked before this war brought sorrow upon our land.” I had no idea that I had done it just in case this very thing happened to me.

I thought of my wonderful Jennie. Was this the end of me? Would she now marry someone else? I couldn’t stand that thought.

And for the first time I actually thought about all the men, dressed in blue and gray, who had fallen, like me. I wondered if they had gotten a chance to think about their life like I was doing now. I was thinking about who I had become and whether I had made a difference on this earth.

I started to pray with more fervor than I ever had, asking the good Lord to have mercy on me. I asked that I be given a chance to live and to return home, if that was His will. I was thinking along the lines that in returning home, perhaps I could be a better husband and father than I had been a soldier. And that perhaps I might become a minister and spread His word. Even with that, I knew it wasn’t my decision.

I finally decided that all I really could pray for was a chance to get a message to mother and Jennie. After that, God could take me if He decided that was best for everyone. And that was my prayer.

I don’t know how long I lay on the field. It seemed like a long time. The blood continued to flow. The pain did not go away like I was hoping it would. I was thought I might not make it off this field.

A House Divided Against Itself is available on line at www.boboconnorbooks.com or at amazon.com. It is also available on all e-book formats.

Labels: A House Divided Against Itself, Walker Author Tours