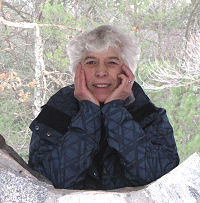 Joan H. Young has been writing stories about the outdoors since the age of 7, when "The Adventures of Skippy the Field Mouse" made its debut. The work survives, but is best left in the box with crayon drawings of squirrels and pressed leaves.

"The Family Christmas," a seasonal poem made it as far as the local newspaper when she was 12, proving that the serious child was already harboring an evil sense of humor.

As an adult, Joan has made a career of proving that she can bumble through life without ever deciding what to be when she grows up. She began with a degree in Communication Arts with an emphasis on theater. Realizing that drama, for her, was like whiskey to an alcoholic, she left a possible career in stage management for a driven man and 10,000 teenagers. (What was she thinking?) A few years later the couple had legally adopted one of the teens, and two younger children, but were still feeding most of the stray 10,000 teenagers as well. No time there for writing anything except grocery lists, and a journal of the wild ride!

In 1986, still longing for a career in sciences, she went back to school, taking higher math and chemistry in hopes of being accepted into the University of Michigan graduate program. From 1992-1995 she lived in Ann Arbor, and did receive a Masters in Environmental Engineering, cleverly getting U of M to pay for it too! Meanwhile, the writing bug still squirmed, and Joan worked hard at collecting rejection slips from a nice series of reputable magazines and publishers. Also during this time slot she began hiking the North Country Trail (NCT), the longest foot path in the United States.

Now armed with an "advanced degree" she returned home and attempted to establish a reputation as a wetland specialist. Well, she was one, but she wasn't very good at marketing herself, and when offered a job as a web site manager, that became the next career. Essays about her hikes on the NCT demanded to be written, and friends urged her to publish.

In 2005, /North Country Cache/ made its debut for the 25th Anniversary of the North Country Trail. Since then, more and more of her time has been spent writing. If only more and more money came from that endeavor, it could be called a career!

Recently, she has begun writing more fiction, including several award-winning short stories soon to be published by Twin Trinity Media, and the Anastasia Raven mystery series.

Young has enjoyed the out-of-doors her entire life. Highlights of her outdoor adventures include Girl Scouting, which provided yearly training in camp skills, the opportunity to engage in a 10-day canoe trip, and numerous short backpacking excursions. She was selected to attend the 1965 Senior Scout Roundup in Coeur d'Alene, Idaho, an international event to which 10,000 girls were invited. She has ridden a bicycle from the Pacific to the Atlantic Ocean in 1986, and on August 3, 2010 became the first woman to complete the North Country National Scenic Trail on foot. Her mileage totaled 4395 miles.

The Anastasia Raven mystery series is being featured this week on the blog!

Anastasia Raven is running from the pain of a failed marriage, and hopes to hide from the world in an old farmhouse she has purchased at the edge of Dead Mule Swamp. When a hundred-year-old newspaper she finds inside a wall is stolen by Cliff Sorenson, and then Cliff disappears, Ana is convinced that the paper holds the key to the mystery. But what old news could be important enough to put Cliff in danger?

Anastasia Raven finds a secret hidden in a hollow tree near Dead Mule Swamp. She thinks she's seeing things, as the discovery appears to have come straight from a Nancy Drew story. With some simple sleuthing, Ana catches Jimmie Mosher, whose grandfather used to own the house she has recently purchased, hiding money in the tree. But what else does Jimmie have to hide?

This story is currently FREE on Smashwords!

When Anastasia Raven agrees to keep Paddy, her cousin's Irish Setter, for the summer, she didn't understand the mischievous nature of a large puppy. As a volunteer with Family Friends, she meets Corliss Leonard, and his granddaughters Star and Sunny, whose mother disappeared seven years ago. The girls fall in love with Paddy, but can the dog solve their problems?


Catch up with Joan H. Young at any of these links: