Celebrate the first anniversary of 'Magic Moment' by Angela Adams 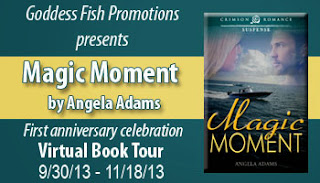 Thank you, Andi, for sharing “Magic Moment's First Anniversary Tour” with me.


I had the idea for a hero who appeared self-centered and egotistical, but was actually a kind and compassionate person. And, I wanted a heroine who brought those character traits out of him. Then, a good secondary plot was needed…something that not only threw them together, but had them alone and together. A couple on the run from a dangerous situation sounded intriguing.


I thought having the couple flee on a boat would be different, but I didn't know much about boat terminology. When my editor at Crimson requested changes to boat references, I emailed some questions to the Philadelphia Yacht Club and Cape May Yacht Club. They both replied, and were happy to help. Now, I know why we call a bathroom the “head.” That's what it's called on a boat. I also worked that lack of knowledge into the novel. I had Laura refer to a “bathroom” and Chase corrected her.

How much do you have in common with Laura?


We both live in Philadelphia and have worked in the office of a produce warehouse.

What was one of your challenges in writing this book? How did you get past that?


Making readers like my characters. My philosophy, as both a reader and writer, is that you need to like the characters to care about what happens to them in a story.

I had entered “Magic Moment” in a contest, and one of the judges pointed out that Chase wasn't likeable when we first meet him. That was going to have to change, or an editor/reader wasn't going to make it through page two. So, there was the challenge of making him appear self-centered, but still likeable to readers.

I still have no idea what I did right. But, after working on those revisions, the novel went to Crimson and we had a deal. I will always be grateful to that judge, and hope to meet her - or him - one day to say 'thank you.'


My grandmother always said “never say never.” And, I have used the setting of Magic Lake Island, where Chase docks his boat, in a previous short story. Magic Lake is a combination of the New Jersey shore and the small town in Vermont where I went to college.


“Magic Moment” is my first published novel. I've had short stories featured in the “Long and Short Reviews,” “Oysters and Chocolate,” and in an anthology published by Whimsical Publications in 2011, “Winter Wonders.”

My other “pen names,” I use for writing book reviews, and I'm low key about them. My real name is hard to remember and pronounce. “Angela Adams” came to mind because my grandmother was an “Angela.” My grandmother loved to read and encouraged me to write. After taking the name “Angela,” I wanted a last name that was easy to remember.


I'm superstitious and generally don't elaborate on “works in progress.” I have been trying, though, to expand a couple of short stories into novellas.

Have you ever developed a crush on one of your leading men?


Oh, sure. All authors, I think, have a bit of a crush on their heroes. That's how we get our readers to love them.

What is so appealing about blending romance and suspense in novels?


I've watched soap operas since I was in elementary school. To me, the best romances are the ones that have an element of suspense. Although the two short stories I'm working on now are more on the “sweet” side…


I still have a VCR connected to my television set, and still watch movies on video tape. Do any of your readers remember VHS?


A “thank you” to Goddess Fish for all the help in putting together not only this tour, but the previous tours during this last year.

A “thank you” to the readers who have supported and commented throughout “Magic Moment's” tours. Many, who have purchased “Magic Moment,” and thank you to everyone who has purchased the book. I'm so grateful.

And, a “thank you” to you, Andi, for inviting me…and, for the newsletter you drop in my inbox every morning. I read it while I'm drinking my coffee. 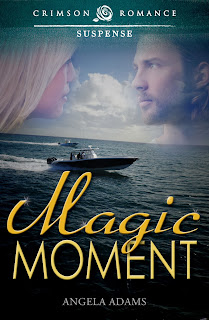 When the FBI brings Laura Roberts - a quiet, reserved bookkeeper - in for questioning regarding activities at the warehouse where she works, an uneasy Laura resigns her job - only Chase Donovan intends to spend a few peaceful days on his boat getting his head together - and finds a woman being assaulted by two men who say his father told them to do it. Chase doesn’t want to believe his father could hurt anyone. Laura doesn’t understand why she’s a target. Can they learn to work together to discover the truth - before someone dies?

Read an excerpt:
While traveling by boat, Chase begins to realize that the woman who he just thought of for the last several years as “just his father’s bookkeeper” is really someone special.

They both laughed, and Chase impulsively made a move that shocked him. His arms encircled her waist. He pulled her back against him and squeezed her tightly. Although he expected Laura to tense or shy away, she reached up and gently patted his cheek. She had interpreted his gesture as two friends sharing a warm exchange, he assumed. Only for Chase, friendship had nothing to do with his actions.

Saved by the dolphins. Six dolphins, sleek and powerful, played alongside the boat. Bobbing in and out of the water, they appeared aware of being admired.

“They’re probably heading north from Florida, or maybe from Mexico,” he said.

She was totally immersed. “They’re a magnificent sight.”

Focused on the mammals, she was unable to see Chase staring. Her face radiated, her smile widened, her eyes sparkled. “Yeah, a magnificent sight,” he said. He wasn’t referring to dolphins.

Laura was more than magnificent. She was breathtaking.

Chase realized that the “something” drawing him to her was her. Funny, beautiful, bright, genuine. That “something” which astounded and delighted him was simply her being Laura.

Angela Adams writes and reviews contemporary romances. Her work has appeared in Romance at Heart, Oysters and Chocolate, and Long and Short Reviews. In December 2011, Whimsical Publications published an anthology, Winter Wonders. Ms. Adams’ short story “Burgers and Hot Chocolate,” was among the collection.