'Northwest of Eden' by Yancy Caruthers 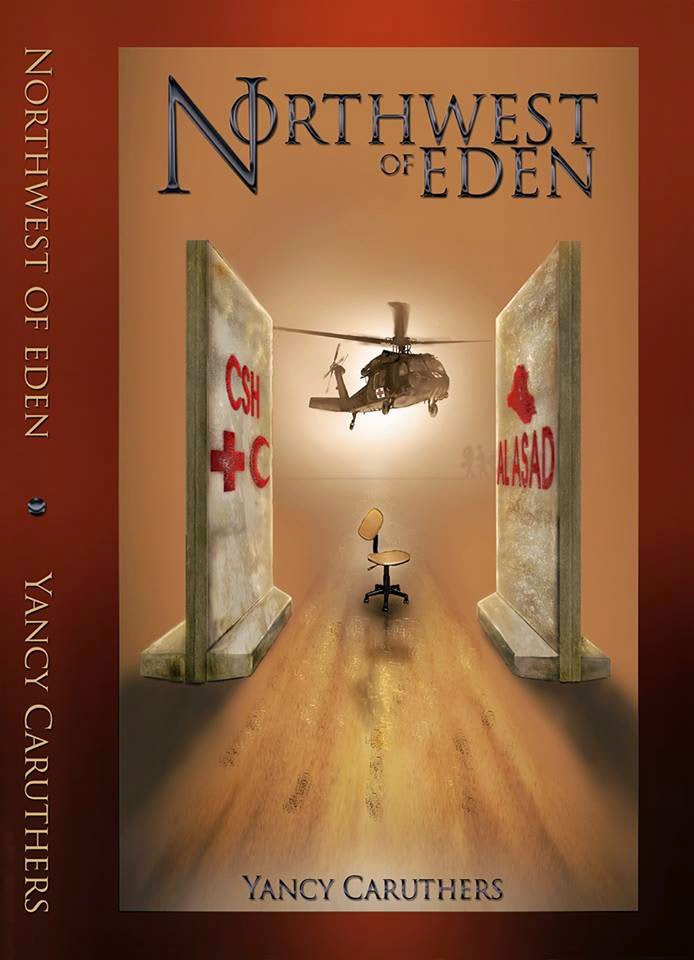 Northwest of Eden is the author's first person account of his experience during Operation Iraqi Freedom as second-in-command of an Army emergency department and leader of an air transport team. The varied cast of characters provides top-notch medical care to service members in harsh conditions, while wielding the darkest humor against each other just to stay sane. Most of the time they succeeded...

Contains some adult language, and some dramatic scenes that may be disturbing.

We were probably flying at about twelve thousand feet, out of range of most of the bad things that the bad guys could fire at us. Time passed with an indecent sluggishness. It might have been an hour, or it could have been six.

The great monster that carried me changed the tone of its roar as the pilot lowered its belly slowly forward. A few cat-nappers opened one eye.

The plane kept shifting downward, on a steeper and steeper slope. At first we were all okay with this, but one by one, our comfort zones were exceeded. My internal organs were being pulled to the right side of my body. I thought several things in the next few seconds.

This sure is a steep approach.

Maybe something is wrong.

Are we going to crash?

An airman in a flight suit sat a few feet from me. He looked indifferent. I flashed him a thumbs-up, which he returned.

I moved my jaw to try to ease the pain in my ears that came with the rapid descent. I pinched my nose and popped my ears, which helped some.

As I relaxed a little, I realized the body next to me had turned to stone.

A young girl, maybe twenty, sat next to me. I turned my head slightly to look at her.

She was petite, mousy. She wore the same armor as everyone else, just extra small. Her face was plain and without makeup of course, but her eyes were soft. A wisp of unkempt blonde hair protruded from under her helmet. She was a pretty girl.

Even under the pale undead lighting I could see that her lips were the same color as the rest of her face, and a bead of moisture hung on an upper lip that would have been quivering if she hadn't been biting it so hard.

She turned her head to look at me, and I didn't look away. Her eyes begged me for something, but I had no idea what. I doubt she did either.

The plane bounced, like we had just hit a pothole in the sky.

In one swift jerk, Plane Girl had slipped her hand behind my elbow, and had wrapped it around my arm, the same way a young lady holds a boy's arm as he walks her into a high school dance, just not nearly as gently. With her left hand, she had circled my arm from above, and was squeezing my upper arm into her body.

I considered for a moment telling her to make her peace with her God because we were all going to die, but even I have a sliver of conscience.

I leaned over and yelled in her ear, like people do in night clubs.

She didn't answer. I could see the tears welling in her eyes, but they weren't falling.

I reached over with my right glove and patted her hand. She held on, and didn't let me go until the tires squawked against the runway.

I grinned at her, gave her a thumbs-up and tapped her helmet twice. I had escorted her into Hell, and she should be grateful, or at least relieved. She didn't smile back. She never looked at me again. Maybe she never existed.

Add it to your Goodreads

The author is a former flight/trauma nurse who served two tours in Iraq during his Army career. Northwest of Eden is a firsthand account of his experience as second in command of an Army emergency room in western Iraq. No politics, just the heat, sand, and harsh reality of the job at hand and the toll it takes.