C.M. Subasic, author of 'The Forty Watt Flowers' on the purpose of creating beauty

Yearning to create?
To be is to do. Socrates
To do is to be. Jean-Paul Sartre
Doo be, doo be, doo. Sinatra

What do these things have in common:
Paint selection chips at the hardware store.
A fabric shop full of buttons and fabrics.
A box of crayons or multi-colored markers.

For me, all of these things (and so many more) are all about the possibilities. They are about making things.

In my novel, The Forty Watt Flower one theme I explore is the desire, the yearning we each have to make things. While writing, I thought about questions like: Where does this need, this desire to create spring from? Why do we bother when someone else can come along and tear it all (and our egos) to pieces?

There were a lot of obvious directions to go with this: We create things to gain respect, admiration, to get our egos stroked. But these directions didn’t feel like enough until I got to this question: Why do beautiful things -- art, literature, music -- matter when the world is crumbling all around us?

Here are the answers I found:

Art keeps us sane amidst the madness of the world. Reading, seeing or hearing something beautiful gives us hope.

A sad song is reassuring because it tells us that pain is normal. It reminds us that other people have negative emotions sometimes, too, so we’re not some weirdo for feeling sad.

A poignant or real moment expressed through a poetic metaphor reminds us that the world isn’t all about filling our houses full of stuff. A well-made song encourages us to see the world with fresh eyes. It allows us to recognize that despite the goofballs in the world or the bad things that happen, there really are better parts of human nature.

And also, we make art because… well, because when you make something like a mud pie and someone else smiles, isn’t that the most amazing feeling ever?

The process of creating something requires you to look from a new perspective. Who ever paid any attention to the seams in a simple curtain until they tried to make one themselves? And when I engage in the process of looking at something with such intense scrutiny: inside, outside, upside down, backwards, light-hearted, heavy-hearted, green and blue-hearted — I discover that the shadows around me are not as dark as I thought they are. In fact, all those so-called ‘monsters’ hiding in those dark places are wounded or struggling just like me or you.

To create a song you take an idea, put it into words and notes, then share it. It’s like making something out of nothing, which is a rather godlike power, isn’t it? It is a leap into the sky, into a place where anything is possible. Each thing we make has the potential to change people’s hearts, and when you do that, you have the power to change the world, if only in small ways.

Creating is a power we each possess that, when exercised, makes us feel more alive. When we don’t use it, we just don’t feel as vital. (Well, at least I don’t.)

In my novel, five young women struggle to create their own, original, knock-your-socks-off sound. Set firmly in the garage, the story isn’t about the fame game or the drug roller coaster. It’s about that struggle to make something beautiful.

Do you make things? How does it make you feel more optimistic, more powerful, more alive? Share in the comments, I’d love to know. 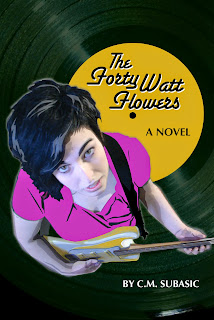 All Trisha wants to do is create something meaningful. Since she's living in Athens, GA, she brings four other women together and the rock band The Forty Watt Flowers is formed. But making good music isn't as easy as it sounds. From the jock atmosphere of the garage where they rehearse to the beer-soaked bars when they gig, these five young women struggle to find beauty in the mess of notes they try to play and the chaos of their lives.

Oh, the feeling of pounding the drums. Juanita allowed herself to disappear into the rough-and-tumble consistency of arms and feet. Flam paradiddle with accent. A long double stroke roll. Drag paradiddle followed by a ratatat pattern with just her weak, right stick. She became those jungle rhythms: The gentle shimmering of cymbal. The soldier march of snare. The boom boom boom, coming up the back-end with bass. A concert of percussion, erasing an erratic world. Here, passion made sense.

Juanita completed an extra hard rolling tumble and pulled the sticks to her lap, the abrupt silence jarring. She became aware of the gap-toothed barn around her, the absolute blackness settled around it, red pines hunched close by, cicadas trilling in chorus.

With a quick move of her forearm she wiped the sweat from her brow, squinted at her arm as if measuring for volume. Not enough. Then she looked up and noticed Tommy's slouched form by the welding equipment.

Colleen is award-winning editor who started her writing life as a playwright. She has had 7 plays produced across Canada and worked with the likes of Samantha Bee (yes, from The Daily Show) and Leah Cherniak.

Her plays include Back Alley Boys about the hardcore punk scene in Toronto, Eye am Hear which tells the tale of a luddite teenage squatters at some undetermined punkish time in the future, A Brief Case of Crack Addicted Cockroaches about the relationship between the media and politics featuring a city councillor who smokes crack (which was never produced because it was too off the wall) and Interbastation about the beauty in ugliness and the ugliness in beauty. Her novel Public Image tied for second in the Anvil Press International 3-day Novel competition.

In addition to her work as a playwright, Colleen puts on the dramaturgy, editor and script doctor hats for a range of publishers, producers and writer clients. She has a Master in Creative Writing from the prestigious UBC Department of Theatre, Film and Creative Writing and has taught play writing at the university level. She's also done the Board of Directors thing with the Playwrights Guild of Canada, The Playwrights Theatre Centre in Vancouver and other arts organizations.

She was managing editor of Taking the Stage: Selections from plays by Canadian Women which was selected as the "most saleable dramatic publication of the year" by the Canadian Booksellers' Association. She has also been awarded Arts Council grants by the province of Ontario and Nova Scotia. She has served on the judging panel of several internationl novel awards. Her one-person play Interbastation was selected as one of the top-10 best shows by CBC Winnipeg in 1998.

She lived in Athens from 1999 to 2001 and, while there, reviewed and edited manuscripts for Hill Street Press.

Colleen currently resides in her birthplace, Toronto, with three grey cats and a drawer full of lint brushes.

The author will be awarding a $20 Amazon or B/N GC to a randomly drawn winner via rafflecopter during the tour, and a print copy of The Forty Watt Flowers (US/Canada only) to 2 randomly drawn hosts. Follow along for more chances to win!