Emory Crawford from The Devil's Music by Pearl R. Meaker was kind enough to stop by the blog today, to let us get to know her a little bit better! Welcome, Emory!


First, I want to thank you, Andi, for having my on your blog. Most people want to talk to Pearl. And thanks to Goddess Fish Productions for making our chat here possible.

I’m Emory Crawford. I live in the small city of Twombly in central Illinois. My husband, Dr. Jebbin Crawford, is a chemistry and forensic science professor at Twombly College. He also is the forensic scientist for Golden County.

Most of our married life we’ve lived in Twombly.

I was born in Woodbine, Georgia. My Dad was a United Methodist minister and we moved around the eastern half of the US while I was growing up, so I don’t have too much of a southern accent any longer. I went to College of Charleston, Charleston, SC in Studio Arts, but only finished one year. I met Jebbin, who was in his senior year, we married after he graduated. I liked being a homemaker, wife and mommy and Jebbin was used to working while at school so I was able to stay home

I’m 5ft. 5in. I’m pudgy with brown eyes, medium reddish-brown shoulder length hair that is graying a little around my face. I love to do arts and crafts, I took a fencing class at Twombly, and I play bluegrass fiddle. Jebbin plays five string banjo.

I’m a practicing Christian but also a free spirit type of person, so I’m a bit on the mystical side of things too. Somehow, lately, that mystical side of me has gotten involved with helping to solve crimes Jebbin is working on, like the murder on the Twombly College campus that Pearl tells about in her book The Devil’s Music.

Our two kids, Lanthanum and Molybdenum (Lanthan and Molly except on their birth certificates) are grown up. Lanthan and his wife and two children live in Illinois but about three hours drive away from Twombly, so we don’t get together too often. Molly has started her masters degree studies at University of Illinois, Urbana, in Museum Studies.

We have two cats, Hortense and Kumquat, and a Golden Retriever named Sophie.

If you were a dessert, what dessert would you be?

I’d be something with chocolate in it, preferably dark chocolate. Death By Chocolate cake. Tiramisu. Dark Chocolate Covered Cherries. Chocolate ice cream with crushed Andes mints in it.

Do you have any unique talents or hobbies?


Well, I was a good fencer and could fence both right and left handed equally well, I naturally right handed.

I seem to be rather intuitive. I mean I have a gift of intuition, what both my grannies called “havin’ a knowin.’” It’s spooky sometimes but I’m getting used to it. It came in real handy with another of Jebbin’s cases, one that really shook up the whole town of Twombly because it involved Jairus Twombly and his wife, Amy. It’s the one Pearl tells about in her next book The Devil’s Hook.

When you were little, what did you want to be when you grew up?


An artist. Wasn’t sure which sort of artist, but I was always good at art and loved doing all sorts of types. I went to college, like I said earlier, and just couldn’t compete at that level. The teachers wanted abstract thinking and surrealistic/abstract work and I’m more a realist. I can do some abstract stuff, but my usual is realism, so I just didn’t fit.

It’s okay. I’ve always kept my art with my hobbies, so I’ve never missed it. No regrets about not ending up with it as a career.

What is your favorite book? Do you remember when you first read it?


The 500 Hats of Bartholomew Cubbins. Well, that was my first favorite that I remember being a favorite. Both when my Mom or Dad would read it to me and later when I could read it for myself. Such a fun story!

This is rather like the dessert question. LOL Too many favorites!

Pride & Prejudice, Harry Potter, This Present Darkness & Piercing the Darkness, Lord of the Rings. And mysteries – lots and lots and lots of mysteries!

Did you have a favorite doll or stuffed animal?


I had a stuffed skunk with a straw hat that had flowers around it like a hat band. My Daddy brought her home from a ministers conference. I named her Flower. I don’t think I’d seen the movie Bambi at that point, so I’m sure it was because of the flowers on her hat. I would take her with me to sit in the luggage compartment that used to be behind the back seats in old VW Bugs. It was open at the top so you could crawl in and out of it from the back seat. No seatbelts in those days. She was my best friend and we played and shared secrets in that special place in the car that only I could fit into.

Do you exercise and eat healthy?

No, not really to the eating healthy. Not, mind you, that I eat tons of junk food, but I do eat it sometimes and I tend to over eat at main meals, especially dinner. If only high calorie food didn’t taste so good!

I often take Sophie for walks. She’s a very intelligent girl, and sometimes seems to share my gift of intuition. I fenced until the sports professor who taught it left Twombly. I really miss fencing. Sometimes I do Wii Fit Plus.

Thank you so much for your time! Check out Emory's story! 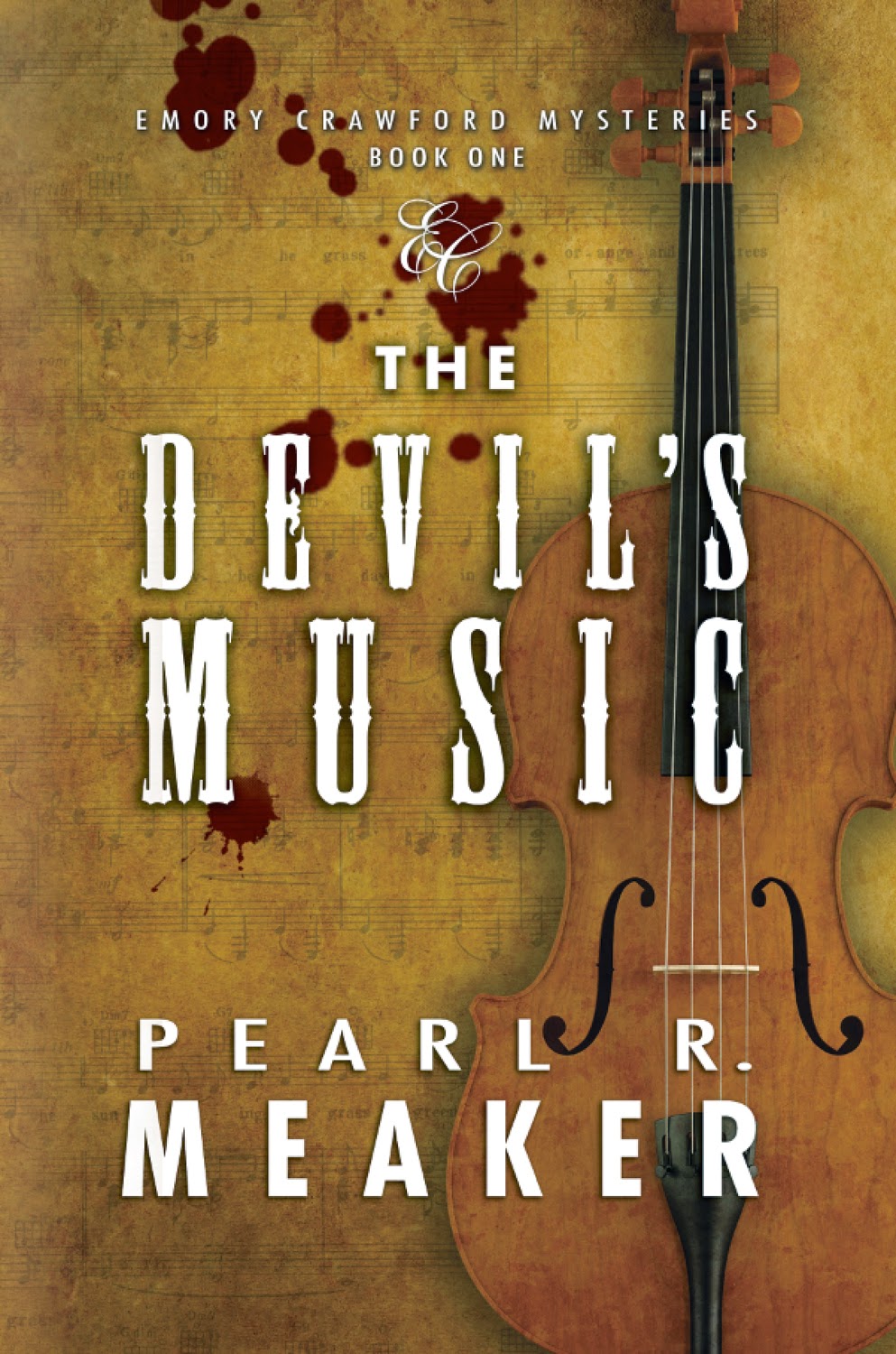 Emory Crawford doesn't do martial arts nor is she an athletic, leggy woman who is built like a model. She's a wife, grandmother, and empty nest lover of crafts, reading, birding and bluegrass music.

When an acclaimed scholar, best-selling author and fellow bluegrass musician is found murdered on the Twombly College campus where her husband teaches chemistry and forensics, Emory takes up her knitting caddy, to help her channel the spirit of Miss Marple, and heads off to help solve the crime.

Stars shone in a sky hazed with moonlight from a half- moon. The fountain played its merry music. The smell of late spring flowers wafted on the cooling air. Soft lights in the fountain made the area cozy while keeping it from being scary-dark. But our playful mood faded as we saw the silhouette of someone sleeping on one of the backless benches near the fountain.

“Drat! I was looking forward to some romance.” At forty-seven I still sound like a
sulky child when I’m disappointed.

“So was I.” Jebbin didn’t sound it though. He was too busy squinting at the figure on the bench. He nodded his head toward the figure. “Something’s odd there, Emory.”

I looked closer. The figure’s arms both dangled down, hands resting on the ground. The legs were straight, hanging off either side of the bench in an uncomfortable looking position. We edged closer until we could see, lit by the light of the fountain, the body of a man splayed lengthwise on the bench. Several pouches and odd amulets rested on his chest. On the ground, the hand nearest us was holding a fiddle with no strings.

Jebbin grabbed my shoulders, turning me toward the fountain and away from the bench. 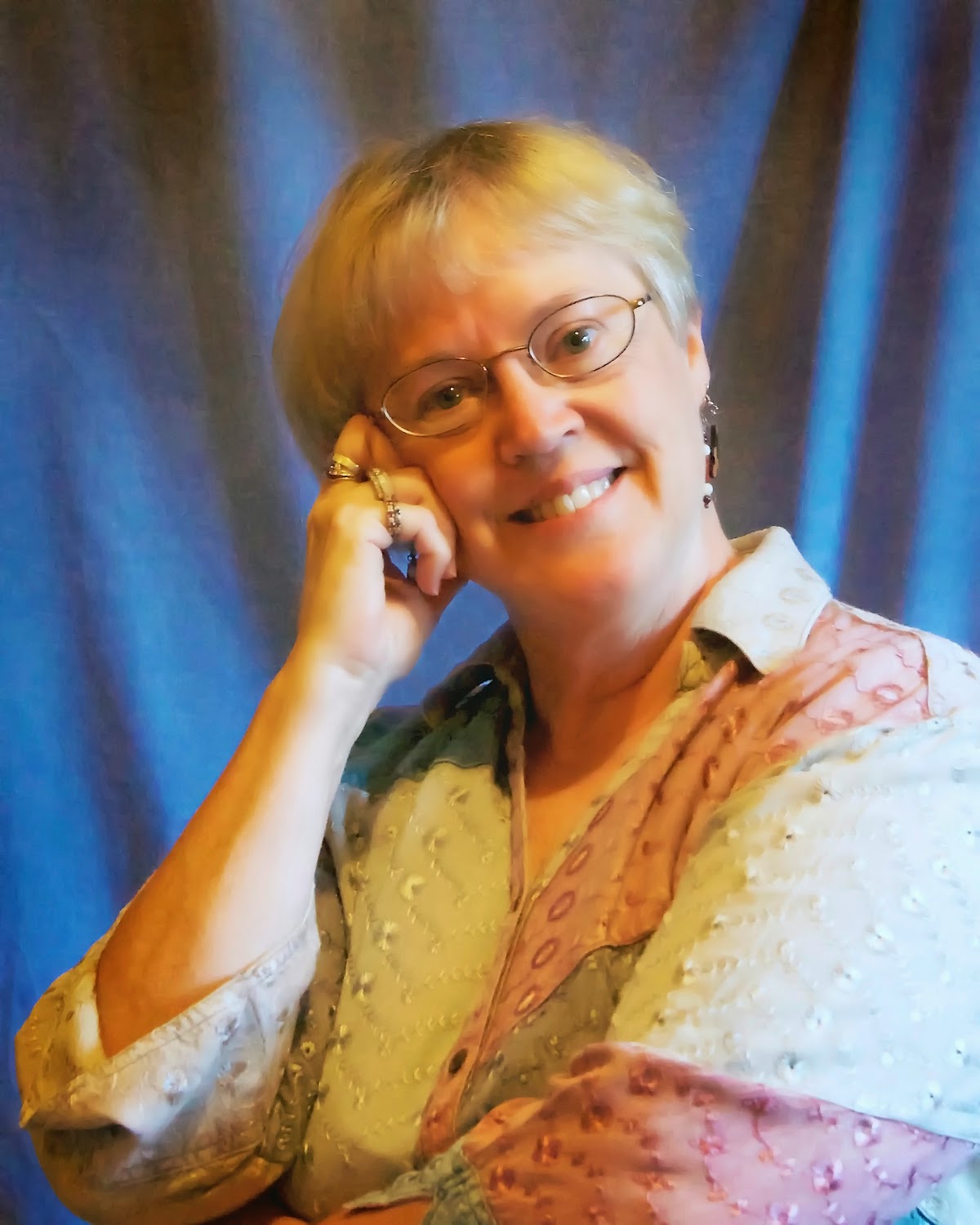 
Pearl R. Meaker is an upper-middle-aged, short, pudgy homemaker, mother, and grandmother who in 2002 became a writer. Initially writing fanfiction she soon tried original fiction at the encouragement of her regular readers. She has been a life-long lover of mystery stories and automatically went to that genre for her first book, The Devil’s Music. She and her husband of nearly 40 years live in central Illinois. They both love bluegrass music, playing fiddle and banjo and singing. Pearl also does many crafts – when she’s not reading or writing - knitting, crochet, origami, needlepoint, and cross-stitch among them. She also enjoys birding and photography and is a former fencer.

Pearl will be awarding a $25 Amazon or Barnes and Noble GC to a randomly drawn winner via rafflecopter during the tour. Follow along for more chances to win!