Hi Andi and thanks for hosting!

I think the best way to start is with dreaded backstory. (I hate prologues as much as the next gal, but in this case I’ll toss the ‘show don’t tell’ wisdom out the window and go for it!)

With each book club I visit, with each lecture to the dementia and Alzheimer’s community, I inevitably get the same question: “Is Adding Lib autobiographical?” No, Adding Lib is fiction, plain and simple. The story centers on Libby O’Rourke’s relationship with her mother, Mae McGinn and the struggles that accompany her early dementia diagnosis. However, my grandfather Jack’s battle with Alzheimer’s planted the seed for the story, and through my work with the American Alzheimer’s Association and the Brain Injury Association of Connecticut, Adding Lib took shape.

Dementia isn’t something to joke about. But in my family, we do; often.

Now don’t assume we’re an insensitive group of heartless tools – although, we are Yankees fans so there’s an element there, however we do know firsthand the healing power of laughter, especially when the brightest of minds falls under the shadow of Alzheimer’s.

My grandfather, Jack, was the first officially diagnosed in our family, however there’s evidence the disease extended back to his parents and beyond. We’re Irish, the odd behaviors and forgetfulness were easy to chalk up to scotch, but in truth the problem was deeper and the symptoms more menacing than booze could explain.

It was the little things at first, the 700th telling of the same story, switching up names of family and friends – nothing alarming, all symptoms synonymous with the joy that is aging. God willing, we’ll all get there someday. But once Jack’s behavior progressed to more unsettling patterns, reality set in and a very proud and accomplished man began disappearing by inches.

A decorated Navy veteran, Jack was the pillar of dignity, and nothing shatters a man of pride faster than a loss of independence - a car accident was the catalyst.

Not major, no injuries, but with the loss of ignition keys came a loss of self-worth and an increased amount of time under the watchful eye of family. It was then the true depth of his illness became apparent, and with symptoms impossible to mask under twenty-four hour supervision, the ugly face of Alzheimer’s made itself known – and feared.

Fear is consuming; it eats up everything in its path and often families affected by dementia feel guilty embracing the joys and smiles of life in the midst of the uncertainty and emotional pain. Through countless interviews with dementia patients and their families, as well as my own experiences, one thing became undeniably clear before the first words of Adding Lib came to life on the page – laughter heals.

Laughter vanishes when any type of dementia diagnosis is handed down. But its warm tones are familiar, comforting to those battling the disease as well as those who love them struggling with what to say and do to lessen the mounting fear.

Adding Lib is the first in the McGinn series and a true labor of love. Its humor and heartstrings approach was crafted in hopes the relatable characters and honest dialogue resonates with the dementia community, and all those who appreciate the healing power of laughter. 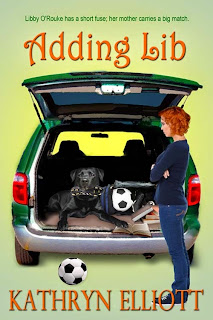 Libby O'Rourke has a short fuse. Her mother, Mae, carries a big match. Engulfed in the never-ending life-juggling of suburbia, Libby fails to notice Mae's emerging dementia symptoms until a kitchen fire puts the problem on the front burner.

Proficient in the art of denial, Mae brushes the shattering diagnosis aside and sets her sights on a matchmaking crusade for her eldest son. After all, if her lucid days are numbered, Mae’s going to make damned sure he makes it down the aisle while she still recognizes the groom.

It’s going to take a razor wit and an iron stomach to handle Mae's diagnosis. Thankfully, just like her mother Libby has both.

Libby felt the weight of the coming conversation bear down on her shoulders like a lead blanket and struggled to find the right words.

“It’s all right, Libby,” Mae said, interrupting her thoughts. “Say what you need to. We’re here for a reason. We both know it.”

Shocked by her mother’s perception, Libby stared at Mae.

The older woman’s eyes were moist but holding back. She continued. “Spit it out, honey. I won’t have a public tantrum. It’s obvious you have something important to talk to me about, and I think you’ve delayed long enough.”

“Well, let’s examine the facts...” Mae grinned despite the gravity of the moment. “You took me to church, plied me with brunch, and now you’re standing there biting your bottom lip raw. Daddy used to call that your tell. We always knew something was wrong if your bottom lip looked like it had a run-in with a cheese grater.”

“Huh?” Libby ran her tongue over her bottom lip. “I never noticed.”

“In your teens, we were pretty sure you were going to bite clean through it,” Mae joked. “At least your nervous habit isn’t offensive; whenever Kevin lies, he grabs his testicles. Since the day he was born that boy treated his penis like an accessory. It’s terribly inappropriate, especially at parties.”

Libby and her husband have an amazing relationship. They understand each other and work well together. Family support is crucial when going through these hardships. She also has an amazing strength about her, which keeps her going, but isn't afraid to let people know when she needs help.

I loved her banter with her brothers. Siblings are another essential support system when dealing with a failing parent. Kevin, Sean, and Libby obviously love each other very much. I only have one sister, but know that I depended on her immensely as we dealt with our parents.

Mae is an amazing woman. She is crass, mouthy, and outspoken, and I love her for it. She is terrified as her sentence is imposed, which is quite understandable. Yet, she is determined to fight with whatever she has left, even as she is in denial. She would embarrass the hell out of me, but I would be proud to call her my mother.

Anyone who has ever been down the dementia road with a parent should be able to relate to this story. We have all been through a kitchen fire, or a similar version of it. We have had to confront our parents about their mental failing. We have had those arguments and felt all of those frustrations. I really felt like I was reading about my own story in a parallel universe.

This was one of those books that made me feel all kinds of emotions. I found myself laughing out loud. I found myself crying. I savored every page and the journey on which it took me. I am impressed that this is the author's debut novel.

In addition to the dementia part of the story are revelations of family history and secrets that helped to shape their current relationships. Romances are brewing in more than one generation. There are so many stories yet to be told in this family and I can't wait to read more about their journey.

Kathryn Elliott is a lifetime journalist with awards in political satire, human interest, and commentary. A Connecticut native, she is a happily married mother of two sons with high hopes one of them will pay for a delightful rest home.

A true believer in laughter's healing power, Kathryn writes characters whose flaws resonate with readers long after "The End."

ADDING LIB is her debut novel, and the first in The McGinn Series.