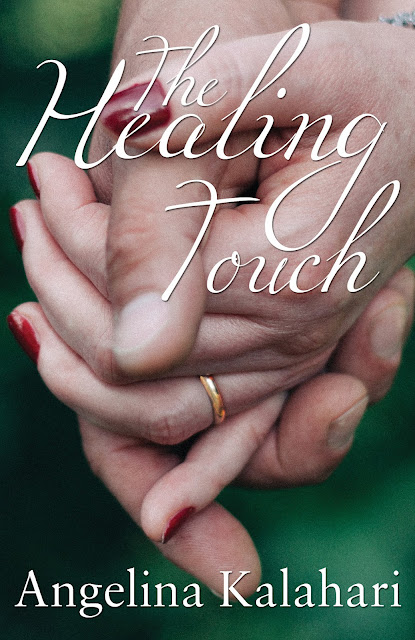 Based on real events, The Healing Touch, is a mesmerising story of loss, heartbreak, passion, and love in many guises. A gripping read you won't want to put down. Funny, devastating, and uplifting by turns, The Healing Touch will leave you yearning to experience the perfect love yourself.

When not one, but two men enter her life, Isabelle Cooper's world is turned upside down. Will the unexpected loss of one man drive her back inside her safe, albeit unfulfilling life, or push her into the arms of the other?

Has she finally had enough of an unsatisfactory sex life with her husband of twenty two years? And will the cost be worth feeling more fully alive than ever before?

Gorgeous, talented, complex Isabelle, a sexy, youthful fifty five year old, is going through the menopause. But is it also a new coming of age for her? Is it time to question her long established position in life, her well-learned role? Is she bold enough to open new windows and walk through new doors?

Angelina Kalahari has worked for over twenty-five years as a professional actress, stage director and operatic soprano, performing around the world. She appeared on many diverse platforms, such as opening the busking scheme on London Underground to a recital at the Royal Opera House and everything in between.

She holds degrees in drama and opera and in 2005 she received recognition for her contribution to the music, culture and economy of the UK from the Queen at Buckingham Palace.

Angelina has always regarded herself as a storyteller, either through music or through acting and directing. She honed her storytelling skills from a young age, writing and telling stories to her siblings at bed time. It became a habit through the years and although she has many finished novels, The Healing Touch is her debut published novel, and not one she envisioned writing. But the tragic loss of her soul-brother, and the insistence of a close friend, resulted in writing and publishing The Healing Touch.

Born in Namibia, and having lived all over the world, she currently lives in London, UK, with her husband and cat.