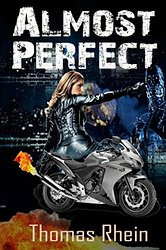 We are living in a future that our parents didn't even think it will be possible, where we take technology advancements for granted. But, with this progress sometimes, something else comes knocking.

Mark is a computer prodigy who makes leaping steps toward artificial intelligence and in the end manages to create it. George, the AI that Marks created rewards him by making him the richest bachelor in the world and together they are trying to create a perfect world.

Reyna is a Top Gun fighter pilot who turns the head to all the man that she meets including Mark. The sparks fly between the two of them and George is watching Reyna every move so he can see if she is the one. Can Reyna clean up her act before George will take some extreme measures to remove her, or not?

Is she the only one that is not safe around Mark creation?

Are we safe around it? Or did Mark unleashed a timing bomb for the humanity?