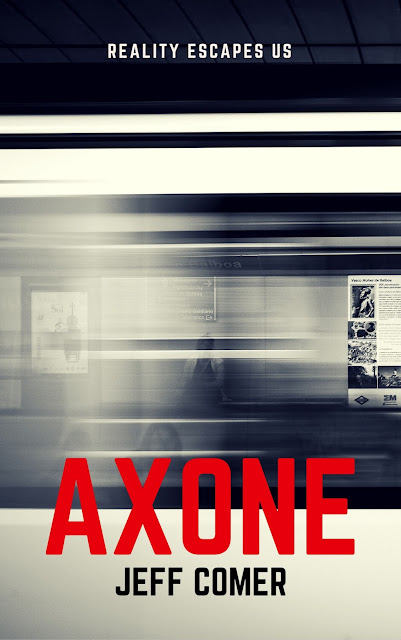 Josh Coleman is an engineer who finds himself moving between alternate versions of his life, each one seemingly as real as the others. His only hope of finding an answer to his strange predicament may rest with a mysterious woman who appears in each of his lives.

“I came to see if I could drag you away from here. It is the Fourth of July after all. I wanted to see the fireworks show on Lake Union but my husband decided he’d rather stay home. Why don’t you come with me?” Robin said.

Josh thought about the last time he had seen “his” Robin, back in the car as they were leaving Henderson on their way to Seattle. That was also the Fourth of July weekend. Now he had relived the same six months over again.

“Sure,” he replied. “It’s still pretty early. We could grab a bite to eat first. I know a great Thai place on University Avenue.”

Josh quit the program and gathered up his coat and backpack.

“Don’t you want an umbrella?” Robin asked. “The clouds I saw outside look pretty ominous.”

“I doubt it’s going to rain very much, especially in July. Besides, no true Northwesterner carries an umbrella.”

“Have it your way,” Robin replied. “At least I’m dragging you away from that computer for a while, it’s worth the risk of pneumonia.”

“How can I say no that that face?”

They went down the hall and out the door to the building. Josh looked up and the sky was dark and foreboding. It was not unusual to have summer rains in Seattle by any means, but he had never seen clouds like this before in July.

“I hope we don’t get drenched at the show,” Josh said.

“Reconsidering your position already? I may share my umbrella if you are really nice to me,” Robin said with a playful tone.

“I may just have to bribe you with fresh shrimp rolls.”

Robin looked delightedly surprised. “Did I tell you that is my absolute favorite dish?”

“You have a knack for those, I’ve noticed.”

“Well we have put in a lot of hours on this project together, I suppose it’s only natural we’d get to know each other’s idiosyncrasies pretty well.”

“It seems like more than that sometimes,” She glowed with affection. “It’s like you know me even better than my husband.”

“Careful there,” Josh said, as he took hold of her elbow. “These bricks are notoriously slippery when it’s drizzly weather.”

They both paused for a moment in Red Square. Robin pulled her arm away from Josh’s grasp and then placed her hand on top of his.

“I just want you to know,” she said. “You are much more than a coworker to me. You’ve become a good friend.”

Josh felt his pulse quicken as he felt her hand. There was so much he longed to tell her, but he knew he could not.

“I feel the same. I can’t believe it has only been six months, but this time has meant a lot to me also, professionally and personally. Holy shit, I just realized. DIG released the game yesterday that had my fix. It totally slipped my mind.”

“There you go again, changing the subject just when we have one of our moments.” Robin was smiling as though she was being playful again, but she was once again studying Josh’s face for a response.

“Sorry,” he replied. The first drops of rain started to fall.

Robin had barely opened her umbrella when the rainfall became heavy. She stood close to him, holding the umbrella over both of them.

“Well ok then. I will allow you to stay here if you admit that I was right. And that I am the most amazing woman you’ve ever met.” Her impish grin had returned. Josh stood for a moment, close enough to smell the familiar scent of her hair and feel the heat from her body. It made him long once again for the intimacy they had shared in the other life. The raindrops were tapping loudly.

“You are the most amazing woman I’ve ever met, Robin.”

They stood for a moment in silence. Her hand found his again.

He started moving closer, knowing it was not right. Her gaze did not leave his. The tapping of the rain became louder. His focus broke when he began to listen to the sound of the rain over his head. It was starting to sound odd.

Instead of the usual sound of rainfall, the tapping on the umbrella had somehow become very orderly, almost rhythmic. He recognized the pattern. It was the staccato sound he’d heard before—once when he was in Dunsmore’s office, and the second time when he was in the car with Robin Arnette.

The other sounds had become quieter as the staccato became stronger and more insistent. Now he could barely hear Robin.

He glanced up to look at the umbrella over his head in the direction of the sound. But when he looked up, he saw only blue sky.

He was standing on the beach again, next to a palm tree whose fronds waved gently in the breeze. He looked in front of him and saw a long sandy beach with an ocean that had an almost impossibly perfect horizon. Dark thunderhead clouds were in the distance.

Then just as suddenly, he found himself sitting in a darkened room. He blinked as his eyes adjusted to the sudden darkness..."

Jeff Comer is a biologist, computer scientist and author who still prefers the term Renaissance Man to polymath, and dares to aspire towards becoming that. He draws on his experiences in Africa, biomedical research and programming to craft novels that look at the way that the human experience intersects with technology.
Posted by Andi at 8:14 PM
Labels: book promo, excerpt, Featured Fiverr, romance, science fiction