Review of Survival: Hijacking into Freedom by M. Ben Yanay 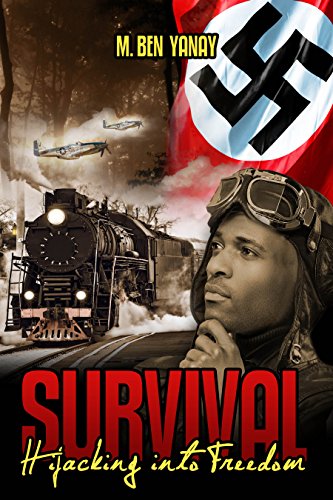 World War II through the eyes of four exceptional heroes

Janus is a Hungarian Jew serving in the Hungarian Army. When his brigade is put to the service of the fleeing German forces, at end of the Second World War, Janus finds himself driving an SS truck under heavy soviet attacks in the Hungarian woods. With his wife and children on his mind, he tries to escape.

An engulfing human drama based on real historical events

In the woods, Janus meets Bob, an Afro-American pilot from the famous all black "Tuskegee Squadron" unit. Bob is shot down at war and captured by a group of Partisans, where he meets Ina, a Russian medical officer who dreams of a new life in America. Against all odds, and despite their different backgrounds, religions and languages, these three uncommon heroes manage to capture a German train locomotive and try to drive it to their freedom.

All the while, Janus's wife, Terry, endures war with their three children, first in the city, and then at the Ghetto of Debrecen, their hometown. After her middle child is murdered, the family is sent to extermination in Auschwitz, but miraculously saved at the last moment.

Towards the end of the war, these four stories converge into one unbelievable drama, providing a gripping and multidimensional view of a most significant period in the history of humanity.

I love WWII stories. I love watching documentaries and movies and reading stories about the conflicts. So when I saw this book available, I was intrigued, especially because the description sounded like a different kind of story than I had heard before. Then there's also the appeal of a story based on true events.

Terry intrigued me as a Christian woman who converted to Judaism for the love of her life. She clung to her Jewish identity, even though she could have saved herself by revealing her Christian background and reverting to those roots. She also shows incredible strength while struggling for survival in the concentration camp and when losing her son to the evil guards.

Janus has an especially interesting history, as his story is revealed through flashbacks. He is Jewish but proves to be worth quite a lot to the enemy. I couldn't decide how I felt about Ina. Bob has a very proud heritage with his service with the famous Tuskegee Airmen.

The story is told both in the present tense as the war is coming to an end and through a series of flashbacks. The flashbacks are important to explain how each character came to be where they are today and why they make the decisions that they do. Sometimes I got a little confused during the flashbacks, keeping characters straight. I also felt like they could have been organized a little differently. Perhaps maybe more of an even rotation of points-of-view or character focus?

I loved hearing each character tell their own story.  It did feel like each character was speaking as an Americanized version of themselves. I think the hardest thing for me was everyone referring to Bob and the other black men as African-Americans. I don't believe that term was in wide use back in the 1940s in America, let alone overseas. It was made more popular in the 1980s. I want to say back then, the term coloreds or others were more likely to be used.

There was an air of authenticity with some real terms in the native languages being used, complete with translation. I did love that the author provide translations for these terms and a bit of clarification about certain events or places. I would suggest that any explanation longer than one word would maybe function better as footnotes instead of being in brackets in the text, to facilitate readability.

Reading this story, I definitely got the feeling that the author was telling a true story, sharing something he had been told many times. When the story is over, he does disclose his connection to the characters in the story. I think he has more of their stories and I would love to hear more of them, or even see this one fleshed out a bit more. I feel like there is so much more to tell!

So while this book is not one that is going to necessarily be dubbed as a classic, it is definitely an interesting read that is worth checking out, to give you another perspective into how people functioned during the horrible conflict. And without giving away too much, I will just say that the whole story of the train is definitely one I have never heard before and is definitely a unique story that needs to be told!

M. Ben Yanay is an Israeli journalist and author.

He was born in Hungary in 1940 and survived the holocaust as a child, arriving in Israel with his parents in 1948.

As an adult, he lived for a few years on a Kibbutz, later becoming the editor of an economic journal and working as a journalist for Associated Press in Israel as well as the Jerusalem Post.

He studied history and philosophy at Ben-Gurion University.

This is his forth book. Three of his other books have been published in Israel in Hebrew:


Other of his short stories have also been published in various journals.
Posted by Andi at 8:01 PM