Review of A Very Merry Murder by Mary Angela with Giveaway

Welcome to the review tour for A Very Merry Murder by Mary Angela! This is the third book in the Professor Prather Mystery Series, but the first one I have read. Find out what I thought about it. You can also read an excerpt and then follow the tour to see what others think of the book as well. Leave comments and questions for Mary along the way. And then be sure to enter the giveaway!

Please note that affiliate links are present within this post. Should you make a purchase through one, I may earn a small commission to help support my websites at no additional cost to you. I also received a complimentary copy of this book in exchange for my honest review. All opinions are my own. 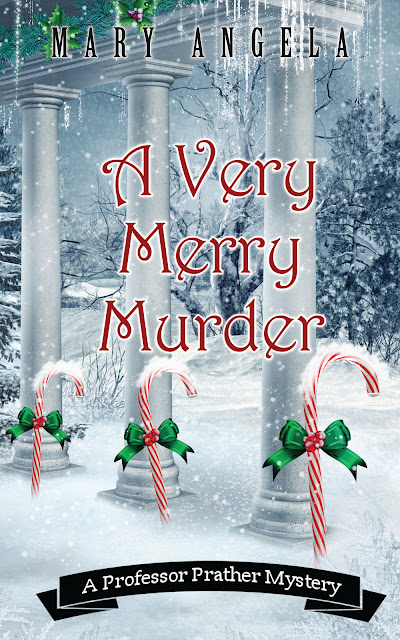 It’s December in Copper Bluff, and from hillside to hallowed hall, everyone is merry—or will be as soon as semester break arrives. Students are studying, professors are grading, and Emmeline Prather is anticipating the university-sponsored holiday concert. Friend and colleague Lenny Jenkins will be accompanying the visiting quartet, Jazz Underground, and Em can’t think of a better way to kick-start the holiday season.

But before she can say “Jingle Bell Rock,” trouble arrives at Candlelight Inn, the bed and breakfast where the quartet is staying. One of the band members dies unexpectedly, and suspicion falls on Em, whose altercation with the man ends with him on the floor. He never recovers, and now she’s worried her reputation might not either.

When Emmeline starts to see parallels between an Agatha Christie novel she’s teaching and the victim, Lenny claims she’s read one too many mysteries. But as the clues unravel, so does the murderer’s patience. Em is close to finding the truth, but will the truth—or the murderer—push her over the edge? It will take a Christmas miracle to solve this case, but if there’s one thing in surplus this time of year, it’s faith.

When we were on the highway, the Candlelight Inn safely in the distance, Lenny began to talk. “I’m sorry I wasn’t there. I had no idea that creep would try anything like that.”

He gave me a look.

“I mean, I know it turned into a big deal when he died, but up until then, I had things under control.”

His hands tightened on the wheel. “Still, it pisses me off.”

“Well, I wouldn’t be too angry. Obviously he got what was coming to him.”

“God, Prather. Don’t say things like that out loud.”

I shrugged. “It’s only us. Granted, Miles was self-centered and arrogant, more than a little caddish with women, but that doesn’t mean I thought he deserved to die. Someone thought so, though. Someone decided to give him what they saw as his comeuppance. I just wonder who.”

“I’m going to pretend I didn’t just hear you say that.”

“What? You think he just died suddenly at the ripe old age of fifty-something? Obviously, this is murder.”

I looked out the window at the white snow covering the fields. “A very merry murder, then.”

**My thoughts**
Em is an interesting character. While she focuses on being an English professor, she has inadvertently ended up becoming an amateur sleuth for three different murders. This third story in the series is a lot more personal for her, as she is actually one of the top suspects. So she is eager to try to clear her own name.

As with a lot of cozy mysteries, the law enforcement agency seems to be lacking in some respects, with the amateur one being more adept at putting together the pieces of the puzzle. In some ways, I kept thinking about Jessica Fletcher, despite the few decades of difference in age. And of course you can't help but think of some Agatha Christie novels, especially as Em's class is currently studying the Hercule Poirot short stories. Plus there are parallels between the fictional stories and the one happening in real life in the book.

Then there's the matter of her friend Lenny, to whom she is greatly attracted. Their romance/not-romance-but-friendship is a very familiar situation. The beautiful Belle, who is part of the group in which the deceased Miles was also a member, is some potential competition.

Em also has an eclectic group of friends who try to help her, such as Sophie, her former student and an officer, and a few people who like to stand in her way, like Jane, who just seems to want to be nasty all the time. They all help with a few twists and turns along the way.

The story is a Christmas cozy, because it takes place during the holiday season. I think this is the first time I have read such a combination. Most Christmas stories seem to be those warm and fuzzy romances. That made for a fun twist. This book is the third one in the series. I haven't read the first two in the series, but this book pretty much worked as a standalone for me. I would love to know more about Em's history with Lenny and the other two murders she helped solve, but those weren't crucial to enjoying this book.

Mary Angela is the author of the Professor Prather academic mystery series, which has been called “enjoyable” and “clever” by Publishers Weekly. She is also an educator and has taught English and humanities at South Dakota’s public and private universities for over ten years. When Mary isn’t writing or teaching, she enjoys reading, traveling, and spending time with her family. For more information about Mary or the series, go to MaryAngelaBooks.com.

Mary Angela will be awarding a $20 Amazon or Barnes and Noble GC to a randomly drawn winner via rafflecopter during the tour.