Music Playlist for Presenting the Marriage of Kelli-Anne & Gerry Denemer by P.D. Alleva

Music is the soundtrack to our lives. We rely on it to help set the mood in movies and on TV shows. Soemtimes authors use it to help inspire the writing of a book, or find that certain songs just fit in well with their story. Today, author P.D. Alleva shares the music he associates with his book Presenting the Marriage of Kelli-Anne & Gerri Denemer, plus a sneak peek into some future works. Let him know what you think in the comments. Then follow the tour for more fun with this book and more chances to enter the giveaway.

Please note that affiliate links are present in this post. Should you make a purchase through one, I may earn a small commission to help support my websites at no additional cost to you.

Music drives the emotion needed to deliver the message of the story. I call it getting into character. Presenting the Marriage required a deep trance of sadness, heartbreak, universal contemplation and ultimately inspiration. The songs listed below were the driving force behind the story. I could go a few days listening to just one song and switch it up as the story progressed. I don’t choose the songs before beginning to write, I believe they are already a part of it, usually finding their way in as I’m driving with the radio on or maintaining an open ear throughout the day. Sometimes it's just one line in the song that satisfies the emotion needed for a particular scene, sometimes it’s the instrumentals.

Nothing Compares To You (Chris Cornell acoustic version): Listed first for many reasons, most importantly Chris Cornell himself whose life ended tragically. In the book, Gerri hangs himself, but his suicide is prevented by a voice in his smart TV that opens a dimension where Gerri is forced to face his past. I’ve dealt a lot with suicide during my career as a psychotherapist and the impact felt by the people left behind to mourn their loss. The story takes this impact into account when Kelli is confronted by the future of her children. Also, the lyric “Where did I go wrong,” beautifuly belted out by Chris (and Sinead O’Connor in the original version of the song), was used in the story when Gerri is trying to get back into his house. Lyrics were written by Prince, another tragic story, so this song really rang through on multiple levels.

Purple Rain (Adam Levine @ Howard Stern Birthday Bash): Another Prince song and Adam Levine shows off his guitar prowess in this version. The book is about intimate relationships and undying love, and although the lyrics don’t 100% match the story, it’s the guitar solo that drove home the emotion.

Halleujah (all versions): I’ve listened to every version of this song probably 100 times each, gearing up for writing the ending and as the ending unfolded. Love is beautiful, the best of all human experience (my opinion at least), but there’s that other side to it, the heartbreak, loss and cold blood running through your veins when all you want is to be warm and joyful. But love is worth fighting for and the pain it causes is worth the horror. We find light in expressing love and discover beauty the world over when we’ve captured it in our palms. Love can deliver us from any darkness. I used the song’s title several times in the story, I hope I paid the song justice. “It’s not a cry that you hear at night, it’s not somebody who’s seen the light, it’s a cold and it’s a broken Halleujah!” Fantastic Lyric.

While My Guitar Gently Weeps (The Beatles): The original title for the book was “Gently Weeping.” I’m a huge Beatles fan, and George Harrison is my favorite Beatle. The mix of lyrics and guitar (seriously if you’re giving your song the title, While My Guitar Gently Weeps, you better make that guitar weep) is paramount, philosophical, heartfelt and down right impactful. Looking at the world turning as love sleeps and that guitar, that guitar sends waves through your bones. Magnificent!!!

In addition to the above my playlist included a lot of 70’s and 80’s love songs, really anything that would remind me of my wife.

I’m currently writing book four in the series, The Rose. It’s a dystopian sci-fi set at the tail end of World War III. The rose is a meditation used by alchemists. Alchemy is the ability to transform chemical structures. Also a useful tool when battling alien vampires. The Rose is a prelude to a trilogy titled The Indigo Trials which will be released next year. After The Rose, I’ll be writing book four in this series, about a 1940’s New York socialite whose sculpture comes to life after a break up with the love of her life. Think Frankenstein meets My Fair Lady. Title is Golem, a psychological supernatural thriller. I have nine books planned in the Beyond the Chamber Door Series. 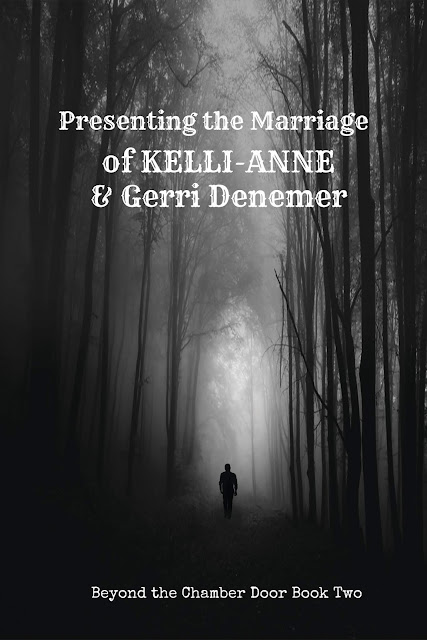 
The Denemer's had it all: Fame, fortune, family, and the American Dream. But tough times have landed on their doorstep— Gerri's acting career is mired in controversy, financial decline is strangling the family bond, and his marriage to Kelli Anne is on the rocks. He'd rather die than face another catastrophe, something the Devil is more than eager to assist. On the night Gerri attempts to end his suffering, his plan is thwarted by a voice in his smart TV, pulling him into a dimension where past, present, and future collide, and the fate of the human race hangs in the balance. But Gerri is not alone. The Devil's minions are nipping at his heels and Kelli is right behind them, determined to save her family and put right what has gone wrong. Will they be successful? Is the bond between husband and wife strong enough to defeat evil? Will they prevent World War III or will evil's plan triumph? Presenting the Marriage of Kelli Anne and Gerri Denemer: A Horror Story, is a tour de force thriller of dark fiction, romance, and horror in an epic battle between good and evil.

He ran to the house, struggling through the wind that sought to push him over, to deter him from entering that house.

“No, Gerri,” the chaperone hollered. “Do NOT go in there!”

But Gerri quickened his pace.

The chaperone was in front of him.

He turned to go around him.

The chaperone was in front of him.

He jerked to the left, running at max speed.

The chaperone was in front of him, pushed Gerri to the ground. Picked him up and clasped Gerri’s shoulders with an iron hand.

“What’re you talking about? I just want to go home.”

The chaperone laughed. He started pacing, circling Gerri with his hand on Gerri’s shoulder.

“What do you think, Gerri, hang yourself and you get to go back home? No, no, no, Gerri. Look around you. You’re not even close to home!”

“Between worlds, Gerri! That’s where you are. What’s in that house is nothing. Nothing more than the slither of energy you left, the portal of death with the stink of fear. You’re not welcome there. Not welcome at all.” He slipped his hand off Geri’s shoulder. Stepped an arm’s length away from him.

“It’s best that you come with me Gerri.”

Gerri screamed, “Where did I go wrong?”

He turned to the house and paused.


P.D. Alleva is an author, psychotherapist and hypnotherapist specializing in trauma, addiction and mental health. He is the author of several books, including fiction novels, Indifference and A Billion Tiny Moments In Time…, Seriously Twisted; These Gods of Darkness (Poetry), Let Your Soul Evolve (1st and 2nd ed), and Spiritual Growth Therapy: Philosophy, Practices and Mindfulness Workbook (non-fiction). He has developed behavioral protocols for addiction and mental health and teaches mindfulness, Buddhist meditations and manifestation techniques to his patients as a means and alternative to using pharmaceuticals. He is currently in private practice with his wife, Lisa. He lives with his wife and children in Boca Raton, Florida.

PD Alleva will be awarding a $75 Amazon/BN GC to a randomly drawn winner via rafflecopter during the tour.