Welcome to the book tour for Life Without Shoes by Emma Cyrus! Today she sat down with one of the characters from her book, Sandy Golden, and interviewed him. And I have to say that I adore these character interviews, because you really get a lot of insight into the character and the story! Please enjoy this stop and then follow the rest of the tour for more fun, leaving your comments and questions along the way. Remember to download your copy and also enter the giveaway!

My Conversation with Sandy Golden

Emma:  I appreciate your willingness to do an interview, Mr. Golden. It’s not easy to present you in a good light since your character in Life Without Shoes isn’t very likeable. Wouldn’t you agree?


Sandy: Do you remember that old Animals song— “I’m just a soul whose intentions are good? Oh, Lord, please don’t let me be misunderstood” —that song’s about me. Everybody sees me the wrong way. I’m always looking for a way to help other peoople. Mistakes happen. Thea was a mistake.

Emma: In the book, you talked about coming from a humble background and making it to the top as a real estate developer. You felt some sympathy with Thea on that. Can you say any more about your climb?


Sandy: I grew up in San Diego. My dad owned a motel near the beach, kind of a low-end motel, and my parents were the only staff. And me, of course, once I was old enough to do stuff — repairs, cleaning, like that. I was lucky to have a high school track coach who had contacts at San Diego State University and helped me get in on a full scholarship.

Emma: And why real estate?


Sandy: Once inside the school of business, I got to know some of the people in the real estate program. They seemed very sharp and down to earth. Real estate is very practical — not a lot of theory. And I could see what was happening down on the waterfront. Buildings going up. I wanted to be in on that.

Emma: Would you say you’ve made it?


Sandy: I was right on track to merge Golden, Sharpe with a bigger firm in San Fran, but they completely tanked during the recession. As you know, we had trouble with the financing of North River Homesteads during those few years.

That project is nearing completion, thankfully. I’ll look around then and decide what’s next. Have I made it? Well, I’m not where I want to be, no.

And, of course, there’s the trial coming up. They wanted me to settle, but I didn’t care for the terms, so now we’re in line for a jury. It’s both good and bad for business to be involved with a high-profile case. I’m on the lookout for another San Francisco real estate firm that might want to buy Golden, Sharpe, and we’ll have to overcome the bias created against me in the media. But developers are very practical, like I said. All they have to do is look at our results.

Emma: And what about your family?


Sandy: I met Carole at SDSU in our senior year. She came from a pretty wealthy Orange County family, and her parents didn’t think very much of me. But I showed them. Our house in Green Butte is almost as big as theirs, and I think I’ve given her a very good life.

No kids, though. She couldn’t have any, and I wasn’t motivated enough to go down the adoption road. We do okay, just the two of us.

Emma: One final question. You mentioned the upcoming trial. It’s been postponed a few times. There are those who say that justice follows the money. Aren’t you a lot better off than John Redmond, because you have expensive attorneys and he has a public defender?


Sandy: Look, about that trial. It’s a joke. We both know I didn’t really have anything to do with that girl. Like I said, mistakes happen. And so what if I can afford the best? That’s the American dream — start at the bottom and end up on top. Redmond just never had a clue about how to do that for himself.

Emma: So, it’s basically his fault that he’s more likely to be convicted? 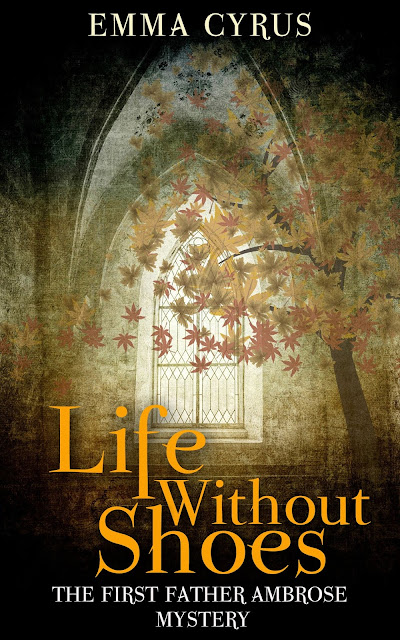 
In the great tradition of The Name of the Rose, the Brother Cadfael mysteries and Grantchester, Life Without Shoes confronts a modern-day monastic with a horrifying crime.

Father Ambrose has found a simple life leading a spiritual community in Northern California. He spends his days on guiding the farming and teaching meditation. Then, someone dumps a body in one of their orchards.

Now, the violence of the modern world has come crashing through the gates. He wants Sheriff Charlie Cormley to believe the body has nothing to do with them, but it’s not that easy. He must take on the role of sleuth to protect his community and find the truth. He finds himself moving out into the world in ways he never imagined, and life at New Life will never be the same.

She slipped the paper out of the sleeve and looked with amusement at the cover story: “Exclusive: Interview with Father Ambrose at New Life!” Under the headline was a large photo of Ambrose sitting at his desk, smiling at the camera. The text started below, continuing to page two.

“No, I signed off on it last night. I’ll look at it later. If it’s different from what I approved, that’s likely to ruin my day, so I’ll just postpone it awhile. He’s got this thing about picturing me heroically. I can’t fault his logic from a journalistic standpoint, but it’s very uncomfortable for me. I just hope New Life benefits from all the attention.”

“If the only one who doesn’t see you as a hero is you, we’ll be fine. Like you said, we’re faced with an opportunity. You might not like it, but this is the way it’s playing itself out. We don’t want reporters accosting our folks at the Farmers’ Market or banging down the gate here, so we have to give them a story that satisfies their readers. Just remember, you can create pretty much any picture you want to. Let’s tell our story by telling stories about you!”

Ambrose groaned. “I don’t want to be famous! I just want a nice, quiet harvest with good sales, no drama, no bodies in bags, no policemen.”

“We’re a little beyond that, don’t you think? I don’t usually say things like ‘suck it up,’ but that’s what I mean. We all need you to do this, and we appreciate that you have the capacity.”

Emma was born in West Virginia and lived there until she was in high school, when her family moved to Pittsburgh. After high school, she went to Boston to go to college. She worked in different small and startup businesses until she moved into a yoga community in Pennsylvania. There, she’s worked on various projects and taught yoga.

She started the Father Ambrose series as a way of pulling together her love of good mystery stories with her deepening appreciation of the real-life magic and mystery of inner work. Father Ambrose has many characteristics in common with the leaders of her community, but his voice is probably hers, or at least what she thinks her voice would be, if she were living inside the parameters of his life.

She’s discovering the compelling nature of writing fiction and the surprises of working with what other writers have called their ‘muse.’ The creative process seems to have its own timetable and logic. The best results seem to come from stilling her own personal voice and allowing that ‘muse’ to speak.

Emma Cyrus will be awarding a $25 Amazon/BN GC to a randomly drawn winner via rafflecopter during the tour.