Til Death Do Us Part by KS David

Welcome to the book blast for Til Death Do Us Part by KS David! I'm sharing an excerpt with you today, plus you can follow the tour for even more excerpts and reviews! Leave questions and comments for the author along the way and enjoy multiple chances to enter the giveaway! 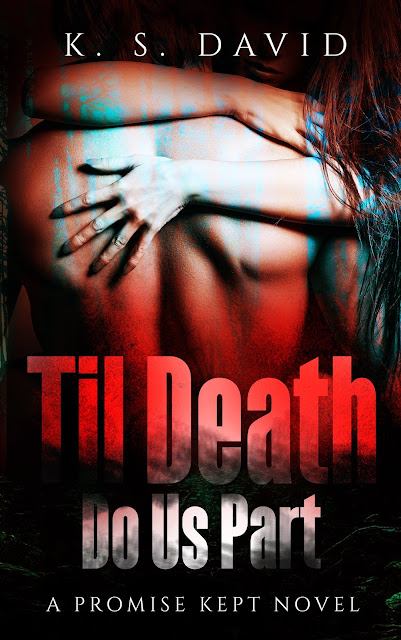 Til Death Do Us Part


Quinn McGuire is settling into her new life just fine. She's moving beyond the trauma of her past. She's fallen in love with her best friend, Jack Lassiter, and slowly rebuilding the career she'd once abandoned. Then her old nemesis is arrested for murdering her husband. To the surprise of everyone, Glenda Penderherst wants Quinn to represent her as legal counsel. Quinn doesn't do criminal defense anymore. Nope, she's focusing on areas a little more refined - less drama.

Naomi Banker, the resident vibrational therapist, asks Quinn to look into an intellectual property rights claim. The request seems innocent enough - but boring. Things soon spice up when Quinn discovers that Naomi was romantically linked to Glenda's murdered husband. Soon, more body's start to surface and like it or not, Quinn finds herself caught in a whirlwind of broken hearts and private alliances, all while trying to manage a few special secrets of her own. She’s convinced of Naomi's innocence and starts to dig for answers. But if she's not careful, she'll end up being added to the body count.

Like before, the woods seemed to grow quiet and I got the feeling that we were being watched.

Jack stopped. He turned around himself, studying the woods around us. “What am I going to find if I keep walking, Quinn?”

Images from my earlier trek fired in my head. “It’s hard to explain. You have to see it for yourself.”

He pinched the bridge of his nose and squeezed his eyes shut. With everything going on, Jack had little time to waste tripping through the woods with me. He had reporters camped out at the station, a contingent of council members who were growing increasingly angry and unsupportive about the murder, and now I’d roped him into hunting down Naomi’s spook.

“You smell that?” Jack asked.

A few more feet and Jack let go of my hand so he could retrieve a kerchief from his pocket. “Saints alive!” he huffed. “It’s damned funky back here.” He offered the kerchief to me. “Use this,” he instructed, then tucked his face into the collar of his shirt. “What in the hell is that smell?”

Suddenly, the tents came into view. Jack signaled me to stop. He pulled me close and whispered in my ear. “Is this it? Is that what you wanted to show me?”

“Yeah.” My voice matched the caution of his tone. “I think someone’s been living here.” I pointed to the big tent. “There’s all kinds of stuff in there.”

“Stay here.” Jack unfastened the release on his sidearm but didn’t move. He stood stock still, his eyes registering everything around us. “Don’t move,” he warned again.

But, instead of heeding his warning, I stepped forward. “I’m going with you.”

He swung around nearly colliding with me. Anger flashed in his eyes. “Don’t challenge me on this, Quinn. Just give me some distance. If something goes wrong – you run.” Jack didn’t like the scene any more than I had.

Pausing at the edge of the clearing, he stood behind a large tangle of branches where he had a view of the entire site. Anyone looking toward the trees would have difficulty seeing him. I waited as Jack moved with catlike steps, cautiously picking up one foot and setting it down again as he moved forward. He slipped his gun out of the holster and eased tenuously toward the edge of the largest tarp. I heard the safety on his gun disengage and watched Jack fold his hands over the handle.

Pain shot through the palm of my hand. I’d been pressing my fingernails into my own flesh worriedly anticipating the worse.

“Hey, anybody in there! Hayden County Police.”

Jack’s voice echoed through the clearing, bouncing off the trees and shifted back to me. Blood thundered in my ears as my heartbeat quickened. I watched him step closer. He threw back the tarp on the larger tent. Quickly, he dropped to a low crouch and swiveled his gun from side to side before plucking his flashlight off his hip and inching closer.

He stepped back and repeated the call at the smaller tent.

He twisted around, locking angry, narrow eyes on me. “I thought I said for you to stay put!” he snapped.

“That’s not exactly what you said. You told me not to follow you and to run if there was a problem.”

He rolled his eyes but pushed his gun back into his holster. “Does Naomi ever walk out her back door? God! It smells like a dump site.”

Yes, this is my affiliate link. That means if you make a purchase through it, I can earn a few pennies at no additional cost to you. Thank you for supporting my websites!

K. S. David lives in the Mid-Atlantic with her husband, their three children and a menagerie of pets. New storylines are constantly running through her head. She keeps notebooks tucked in pockets of the car, the nightstand and makes voice recordings just about all day long. She's addicted to true life mysteries and crime shows, both of which marry well with a great romance. Some of her favorite things are long walks, reading in bed, baking and of course, writing her next novel.

K.S. David will award a $20 Amazon/BN GC to a randomly drawn commenter. Follow the tour for more chances to win!