Welcome to the book blast for Justice Gone by N. Lombardi Jr. This one is for fans of legal thrillers. I have an excerpt for you to check out today. If you follow the tour, you'll find more excerpts as well as reviews. Download your own copy and leave the author some comments and questions. Be sure to also check out the great giveaway! 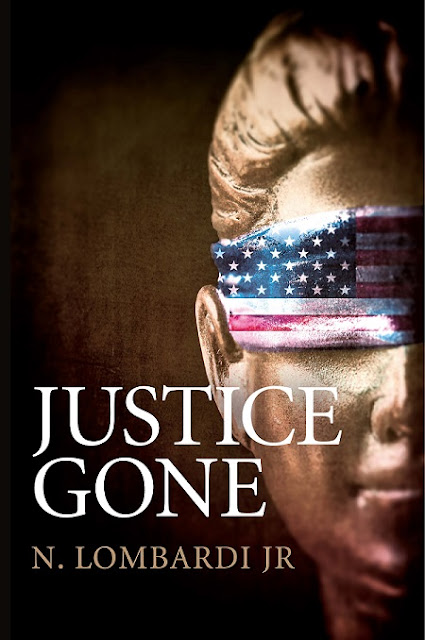 When a homeless war veteran is beaten to death by the police, stormy protests ensue, engulfing a small New Jersey town. Soon after, three cops are gunned down.

A multi-state manhunt is underway for a cop killer on the loose. And Dr. Tessa Thorpe, a veteran's counselor, is caught up in the chase.

Donald Darfield, an African-American Iraqi war vet, war-time buddy of the beaten man, and one of Tessa's patients, is holed up in a mountain cabin. Tessa, acting on instinct, sets off to find him, but the swarm of law enforcement officers gets there first, leading to Darfield's dramatic capture.

Now, the only people separating him from the lethal needle of state justice are Tessa and ageing blind lawyer, Nathaniel Bodine. Can they untangle the web tightening around Darfield in time, when the press and the justice system are baying for revenge?

In memory of Kelly Thomas, who was beaten to death by members of the Fullerton Police Department on July 5, 2011.

Bruntfield, New Jersey, just another banal town in a part of the country that nobody thinks about, was about to become famous; or rather, more aptly put, infamous. People sauntered past lackluster shops unaware that in a few days, the lackadaisical streets would bear the rabid frustrations that divided the nation; a pus-like bitterness that was held in check by the demands of everyday survival and the distractions offered by obsessive consumerism and brazen media.

Some would inevitably blame the cascade of events on the weather, since the origins could be found on a hot summer day in 2006. Sure, just about all summer days are hot, but this one was close to the record, and humid to boot. By the end of July, the Northeast coast was suffering under a sweltering heat wave. Despite the humidity, no one could remember the last time it had rained. A hundred-year drought was predicted, they’d said.

Bruntfield, among the many places under this curse, had its water supply so severely depressed that the city authorities were forced to impose water rationing. As if that wasn’t enough, the excessive load on air conditioners led to incessant brownouts. With the weather nothing less than insufferable, suffocating, oppressive, even provoking, tempers flared along with the temperature. But the local situation, as bad as it was, was about to get worse.

N. Lombardi Jr, the N for Nicholas, has spent over half his life in Africa, Asia, and the Middle East, working as a groundwater geologist. Nick can speak five languages: Swahili, Thai, Lao, Chinese, and Khmer (Cambodian).

In 1997, while visiting Lao People's Democratic Republic, he witnessed the remnants of a secret war that had been waged for nine years, among which were children wounded from leftover cluster bombs. Driven by what he saw, he worked on The Plain of Jars for the next eight years.

Nick maintains a website with content that spans most aspects of the novel: The Secret War, Laotian culture, Buddhism etc. http://plainofjars.net

His second novel, Journey Towards a Falling Sun, is set in the wild frontier of northern Kenya.

His latest novel, Justice Gone was inspired by the fatal beating of a homeless man by police.

The author will be awarding a $15 Amazon or B/N GC to a randomly drawn winner via rafflecopter during the tour.