Take on Me (Cursed Kin #3) by Kyla Riley 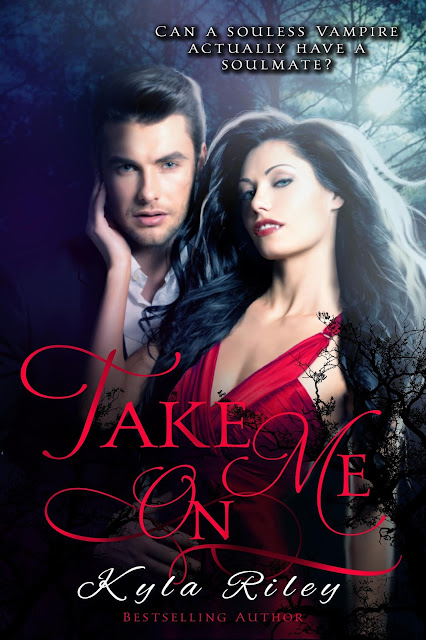 Vanessa Stafford had a life any woman would wish for… wealthy, pampered, with a beautiful home and marrying her father’s protégé. Her direction in life had always been planned for her by either her parents or her fiancé- but their ideas never allowed her be herself. A stolen moment of blissful happiness was like pulling a veil of disillusionment from her eyes. She knew deep down inside that it was time for her to break free of their grasp… but was she running straight into the arms of another man who would treat her the same?

Fiacha Cael spotted the stunning woman surrounded by others at the bar. Centuries had passed and his friends had slipped away over the years. He was now mourning the latest passing of a companion- and the pretty bachelorette at the bar was supposed to be celebrating. They were both surrounded by people but alone… so different, yet so alike. He felt a staggering depression swamping at his soul and saw the same expression in her eyes- driving need to comfort her. He had his own issues to sort through first… and the years had not been kind to his ironic phobia.

Could Fiacha understand the desire for independence that Vanessa had? Could she help a struggling vampire that fainted at the sight of blood? Both had their demons they fought against- yearning for more from this world… but would she be willing to take him on?

Available on Amazon
Yes, this is my affiliate link. Should you make your purchase through it, I earn a few pennies at no additional cost to you. Thanks for helping to support my websites!

Kyla Riley is the secret pen name of an award winning, best-selling author. Dabbling in fantasy, Kyla gets to explore another world that brings her in contact with vampires, ghosts, werewolves and witchcraft. Please look around, explore and have fun as she brings you stories that will delight and set your blood pumping.

I was compensated via Fiverr for sharing this book. I only share those books that I feel will be of interest to my readers.
Posted by Andi at 2:13 PM