Welcome to the blurb blitz tour for Cakewalk to Murder by MK Scott! These culinary cozy mysteries are right up my alley and have been for a long time. Please enjoy my review and then check out other reviews and excerpts. Plus follow the tour for more chances to win the great giveaway! 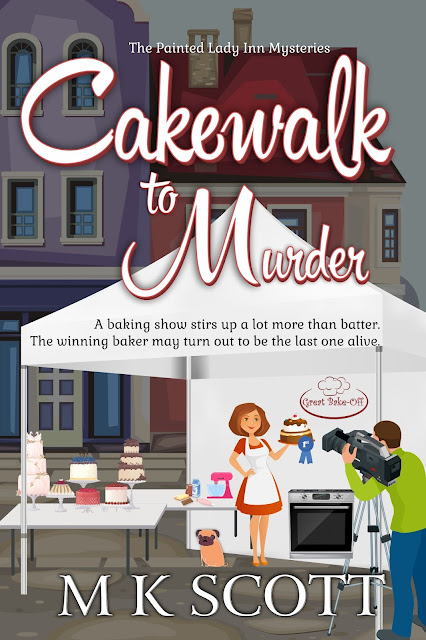 Bake-off fever is in full-swing and Donna can’t help but have visions of becoming the next great baking star, but the competition is stiff, and someone is willing to kill to win.

When one of the contestants is found dead, a twist of fate puts Donna at the center of the competition. That’s the perfect position to unravel the mystery, but only if she doesn’t get caught in the crosshairs.

A petite brunette and a taller man with a city haircut that screamed expensive waited at the bottom of the stairs, giving each other weighted looks. If it was one of her married couples, then the anniversary weekend was not starting out well. The woman stepped in front of Donna before her foot could reach the floor.

“I’m Emily Featherstone.” The woman smoothed a hand down her the skirt of her navy suit. “I believe the show booked me here?”

“Yes.” Donna agreed and stepped around the woman. “I’ll get your key, and Ten can show you up to your room.” She put a slight emphasis on Ten’s name. If he wouldn’t check people in, then he’d haul them up to their rooms.

The woman moved closer and lowered her voice. “I don’t want my room next to that pretender.”

“Okay, but I’m not sure who you’re talking about.” Mentally, she sighed. While the idea of a bake-off might be fine for her, she had to accept she might be waist-high in demanding divas. That would be the price she paid. It wouldn’t be the first time.

“Dalton Gallant,” the woman hissed the name through gritted teeth, then shot a toxic look at the man standing a few feet away.

“How about I put you on the third floor as far away from Mr. Gallant as possible?”

“Yes.” The woman pressed her hands together. “That’s the first thing that has gone right for me since I was chosen as a contestant.”

Personally, Donna would have considered being a contestant as one of those things that went right.

On sale for 99 cents!
Yes, this is my Amazon affiliate link. If you make a purchase through it, I will earn a few pennies at no additional cost to you. Thanks for supporting my websites!

**My thoughts**
I'm a sucker for culinary cozy mysteries, so when I saw this was available, I had to jump on it. I feel like I have read other titles by this author duo, but none from this series. It is the 10th book in the series, so there is definitely a lot of history in the story, but it isn't completely necessary to have read the other ones before this one, in my opinion.

The bake-off competition has come to Donna's small town and they are staying at her inn. Right off the bat, one of the contestants is murdered. Donna is intrigued by the murder as it is, plus now she has the opportunity to compete on the show. Doing so also allows her to do a bit of investigating on her own.

I liked the characters in this book and would like to visit the previous books in the series to get to know them better. They are all quite entertaining and I am sure have some great stories in their pasts to share, plus could keep going for several more stories.

I did feel like a fair chunk of the book did focus more on the reality TV part and not as much on the actual mystery of the death as I would have expected. But then once it got into the investigation, it did keep me guessing and I didn't figure out the identity of the murderer as quickly as I usually do.

It's a fast read, so it was a fun way to spend an evening. 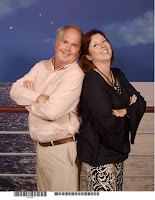 
M. K. Scott is the husband and wife writing team behind The Painted Lady Inn Mysteries and The Talking Dog Detective Agency. Morgan K Wyatt is the general wordsmith, while her husband, Scott, is the grammar hammer and physics specialist. He uses his engineering skills to explain how fast a body falls when pushed over a cliff and various other felonious activities. The Internet and experts in the field provide forensic information, while the recipes and B and B details require a more hands-on approach. Morgan’s daughter, who manages a hotel, provides guest horror stories to fuel the plot lines. The couple’s dog, Chance, is the inspiration behind Jasper, Donna’s dog. Overall, both are fun series to create and read.

MK Scott will be awarding a $25 Amazon/BN GC to a randomly drawn winner via rafflecopter during the tour.