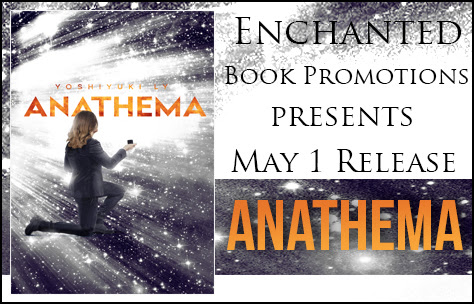 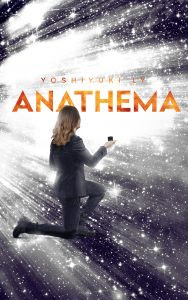 Prepared to die for her country, Solaire Copeland is drafted to the Drakengard knighthood at twenty-two years old, and vows to stop running away from the one she loves. Guarding over her dark secrets in shame, she nevertheless takes a leap of faith and entrusts herself to her intelligent equal in Stella Azrith, an alluring, measured, and methodical young woman of magic. Solaire elevates her love for Stella in romantic showmanship and subservience, even as the two of them struggle to understand one another through their temperamental differences. Anathema is a historical fantasy romance that tells the tale of Solaire and Stella’s courtly relationship in their youth, as they grow into their characters—Archangel Vespair and Mistress Fury—from The Scorpion’s Empress, Venus and Lysander, and Black Waltz as a prequel to the existing trilogy.

Desperate to keep Solaire at home, Stella conspires to prevent her from getting sent off to fight in an unjust war for their country, the Monomyth of Astora. In her scheming at the highest levels of government, she forms an unstable alliance with Fey Murasaki, the wicked and wily ambassador from Astora’s closest foreign ally. Stella and Fey’s influence across the land slithers in the darkness while Solaire’s knightly powers shine to alarming levels in the light, causing them to become targets—for both good and ill—of the nation’s most powerful leaders. Through intensifying mortal perils, Solaire’s love for Stella deepens to maddening levels, restrained only by her distinct sense that her free will erodes more each time she kneels in fulfilling servitude.

Independent streaks contradict religiosity in service of loving a woman with a will so strong—Solaire bears both the light and the dark of enlightened empathy and burning hatred, with her secrets fueling her rise as the strongest knight of an age.

Yoshiyuki Ly was born in San Diego, CA. Her pen name represents her multiracial heritage and a unique, diverse outlook that reflects in her work. She is a writer and a gamer, primarily inspired by thought-provoking, well-written video games such as the Shin Megami Tensei, Dark Souls, NieR, and Drakengard franchises.