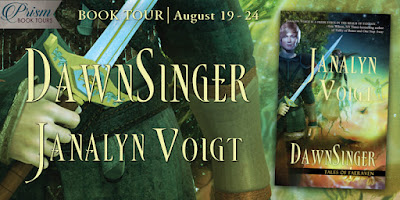 We hope you enjoyed the tour! If you missed any of the stops
you'll find snippets, as well as the link to each full post, below:

Welcome to this book tour of DawnSinger, an epic medieval fantasy adventure. Fantasy will always be my first love, although I’ve become a multi-genre author. That’s a fancy term for a storyteller. If I could turn the clock back to the Middle Ages, I’d be a bard. Author Linda Windsor, an endorser of DawnSinger, named the story bardic fiction. I consider that high praise indeed. . .

Now for a stormy moment in flight...

A crosswind caught Kai’s wingabeast as lightning flared too near. Shrilling, the winged horse tilted in flight, and Kai’s stomach lurched. A gust snatched the hood from his head and roared in his ears. He blinked to clear the stinging rain that drove into his eyes. Thunder boomed like a timpani, shaking the air. Flecht shuddered beneath him, and Kai placed a calming hand on his wingabeast’s straining neck. He did not like this long flight through the wild night any better than did Flecht.

"DawnSinger is an epic tale that unfurls in a world that is different, yet so familiar. A high fantasy world with flying horses, spirits, and mind magic, Janalyn Voight was able to create a world that is fresh and new in the fantasy genre. . . . Overall, DawnSinger is a satisfying read, and has a subtle message at the end that will leave the reader thinking afterwards."

Shae put up her hood and left the shelter of the stronghold to follow the graystone path. A chill wind rippled through the folds of her cloak, and she shivered. Overhead, clouds unfurled in a pearling sky. She passed into green scented shadow, where notes of damp moss and ripe humus met her.

She shouldn’t have yielded to temptation and escaped into nature unescorted. In earlier days, she had roamed the grounds in freedom with no one caring. She couldn’t get used to the strictures placed on her now that she’d grown older. When would she learn to be more like Katera? She couldn’t remember her winsome twin ever causing their mother concern.

"Jannalyn [Voigt] vividly paints a picture of her fantasy world with descriptive words and phrases. It’s not challenging to imagine this land filled with wondrous beauty and creatures as well as barren and desolate places. Shae, kai, and a handful of others undertake an epic quest to save their beloved people and king. I enjoyed both of these elements of the story. . . . Now that I’ve gotten the cadence of this mystical, magical world, I’m not ready to leave it yet."

"Epic Christian Fantasy? Yes, please. DawnSinger is an inventive novel with beautifully descriptive prose and dialogue. I absolutely love the imagery and symbolism woven through the book. . . . I highly recommend checking out this original and inspiring novel."

Flecht quivered under Kai’s hand. Shae must have communicated to the beast the tension he read in her face. Why did she stare at the naked branches of the small, white tree? He drew his brows together but didn’t speak. Her eyes, so green they reminded him of deep shadows in an old forest, told him nothing. As she settled the cloak upon her shoulders, burnished tangles cascaded down her back. She looked beautiful and far too grown.

Something had upset Shae—that much seemed obvious. Equally obvious was her desire for privacy in the matter. Well, he didn’t question such things. He already held enough secrets to quell any desire for more.

"The story is a war between good and evil. Shae is guided by the light of the God she worships. She has companions who will do anything to protect her and keep her from fulfilling an ancient prophecy. There is plenty of action and adventure that will thrill fantasy lovers. . . . I am now invested in the story and look forward to having good prevail."

"The plot shows the draw of evil and the difficulty even the good have of resisting its pull. Voight did an excellent job of creating an alternate universe and having things remain consistent within that world. The book does have a bit of a surprise ending and I look forward to seeing how that surprise plays out in future titles in the Tales of Faeraven series."

He smiled. “Your heart speaks truth. I am a wayfarer…and I am more.” He stroked the tears from her cheeks, feather-light, like the touch of a draft.

“Remember, Shae, you must look to the light.”

She opened her eyes, ready to ask how he knew her name.

She knelt alone in the Allerstaed.

Funny how childhood memories embed themselves in your mind, but only parts of them. I can still feel the rough paper as I turned another page in a novel from my parent’s bookcase. A precocious reader, I’d advanced long ago into adult books. I don’t remember this one’s title, but the story followed the journeys of Sir Francis Drake, an early explorer. Specific phrases are lost to me, but the vivid imagery remains. I can still hear the ship’s creaking, bask in sunlight breaking through the clouds, and taste sea salt on my lips. . .

"I became invested in the outcome because I cared about the characters. I see their quest as allegorical to some biblical tales and symbolic of the eternal good vs. evil battle. . . . The plot is thrilling with action and drama at every turn leaving readers wanting more. Overall, Dawnsinger is a well written adventure steeped in thoughtfully planned fantasy that fans of the genre will surely enjoy."

"DawnSinger is the first book in the series and in true fantasy fashion there is an epic quest, terrible dangers, betrayal, a taste of forbidden love, and even more importantly the story gets darker as the conclusion draws nearer. . . . I enjoyed DawnSinger, its characters and strange creatures, and I look forward to returning to the land of Faeraven in the next book in the series..."

Shae landed in Flecht’s saddle with a thump as Kai deposited her with more speed than grace. He bent and then straightened, and she caught the glint of metal.

Kai pressed something into her palm, and her fingers curled around a knife’s hilt. “They’ll need to dismount to attack with swords. I’ll defend you, but if things go badly, take Flecht and follow the weild to the inn. You’ll see it just back from the banks. You can trust the innkeeper.”

Kai strode from her before she could point out that she had no idea how to fly a wingabeast. His sword rasped as he drew it from its sheath.

"Oh wow, I really loved this book! . . . If you love a good fantasy with loads of adventure, then this is the book for you!"

“Only the cold and weariness that comes at such altitudes—and wind shears. But I know the passes well.”

He didn’t mention the possibility of encountering wingabeast riders bent on killing them, but she knew it existed. Even now, the dark riders might track them.

She closed her eyes to pray with zeal but soon fell into the languor of warmth and drowsiness. “My thanks,” she said, her tongue thick with sleep.

“You protected me this night.”

“Sleep, Shae.” She heard the smile in his voice. “Tomorrow’s journey will try our strength.”

"The biggest factor in whether I like a Fantasy book is the world building. Janalyn gets it right. She creates such a beautiful and interesting world. She definitely made the world of Faeraven unique filled with interesting creatures and characters. . . . I really liked Shae and Kai’s characters. I felt that we could relate to them. . . . Overall, I really enjoyed the story. Suspense, murder, drama and action were just around the corner in every chapter. . . . I think this book would also be great for teens as it read more like a YA book. Great for adults and teens alike."


Reading On The Edge - Excerpt

“Kai.” A voice rasped from the carved bed that dominated the room. “You have brought her?”

Shae started. In a combination of weariness and awe of Torindan, she had all but forgotten the purpose of her visit.

The musician came away from the window, and light slanted across him to reveal a lithe figure and features of surpassing beauty. Vibrant hair of gold sprang above a well-formed brow. Fathomless eyes held her. Shae caught her breath, and her hand went out in a blind motion.

A foul wind breathed over Shae, and the hair on the back of her neck raised in warning. A hissing from the broken stairway sent prickles walking over her skin. Eyes gleamed in the shadows, and long shudders traveled her spine.

Shae stumbled on the stone stair suspended between a dark void and a wall of living stone. She called for Kai, but her voice made no sound. Where was he?

“Find the light and be saved…” The whispered words stirred the air.

"This was a beautifully written Christian fantasy. I enjoyed the bits of scripture thrown into the story, it really made them come alive in a more action-packed way. The writing was interesting and the characters kept me hooked. I also enjoyed the world and different places in the world. . . . Such a fantastic read and can't wait to read that sequel!"

Don't forget to enter the giveaway at the end of this post, if you haven't already...

The High Queen is dying...

At the royal summons, Shae mounts a wingabeast and soars through the air to the high hold of Faeraven, where all is not as it seems. Visions warn her of danger, and a dark soul touches hers in the night. When she encounters an attractive but disturbing musician, her wayward heart awakens.

But then there is Kai, a guardian of Faeraven and of Shae. Secrets bind him to her, and her safety lies at the center of every decision he makes.

On a desperate journey fraught with peril and the unknown, they battle warlike garns, waevens, ferocious raptors, and the wraiths of their own regrets. Yet, they must endure the campaign long enough to release the DawnKing and the salvation he offers into a divided land. To prevail, each must learn that sometimes victory comes only through surrender.

Goodreads│Amazon│Barnes & Noble│
ChristianBook│Harbourlight/Pelican
Should you make a purchase through my affiliate link, I may earn a few extra pennies at no additional cost to you. Thank you for supporting my websites! 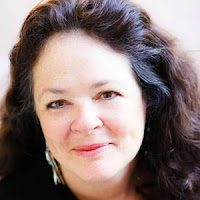 Janalyn Voigt is a writer and professional speaker with a photography habit and a passion for travel. Her unique blend of adventure, romance, suspense, and fantasy creates worlds of beauty and danger for readers. Tales of Faeraven, her epic fantasy series beginning with DawnSinger, carries readers into a land only imagined in dreams. She is represented by Sarah Joy Freese of Wordserve Literary.

One winner will receive a fantasy-themed basket, hand-painted Pegasus mug, hand-crafted beaded votive candle bowl, dark chocolate bar, and a Tales of Faeraven bookmark (US only)