Review of Movie Scripts and Madness by Melissa Baldwin 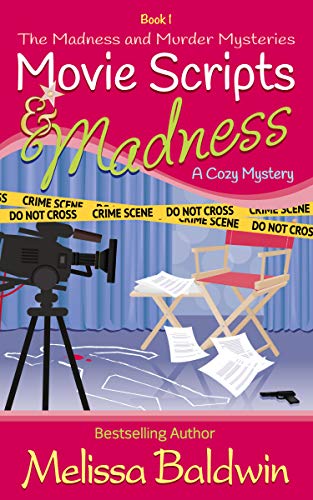 Kendall Whitaker always longed for a starring role in a movie full of action, adventure, love, and murder. She just never thought she would be living in one.

An aspiring actress, Kendall left her normal life in Phoenix for the bright lights of Hollywood. She hoped taking a job as the assistant to the miserable Marketing Director at Blossom Studios would be her stepping-stone to stardom. When she finally gets her hands on an audition script, she refuses to let anything stand in her way. What she doesn’t expect is the return of her arch nemesis, the attention of a very dashing actor, or finding a dead body.

Before she knows it, Kendall finds herself embroiled in the mysterious events taking over the day-to-day activity at the studio. With each unfortunate incident—including the disappearance of her boss—Kendall is smack dab in the middle of it all and on the radar of the handsome detective in charge of the investigation. Could the answer be hidden in a recently canceled movie, or has the answer been in front of her the entire time?

Someone is set on destroying Blossom Studios, and they will do whatever it takes to succeed. Kendall must solve this mystery to prove her innocence and save her own life.

**My thoughts**
This is Melissa Baldwin's first attempt at a cozy mystery. While not my favorite book of hers, it does show some potential, and I think the series will improve as she keeps going.

Kendall works for a movie studio as a stepping stone to an acting career. When she accidentally stumbles upon a dead body at the studio, she finds herself thrust into being an amateur sleuth. It's totally self-serving, but I could see myself wanting to do the same.

She is also dealing with an arch-nemesis from high school, Emma, who has her hook set in Grayson, the hot, popular actor who has his sights set on Kendall.

Kendall seems a bit naive. Emma is nasty. There's something a little shady about Grayson that I can't put my finger on. But Kendall is so hoping for love that you want it to work. And then you add in the weird disappearance of Mr. Poole, her boss and threats against her.

There are some good twists and turns and you honestly cannot really be sure whom to trust. The ending may surprise you, as well as some of the developing relationships.

I do plan on reading the next in the series, because I feel like it can only get better. And I am totally a sucker for both cozy mysteries and Melissa Baldwin's books.