The Angel and the SEAL by Petie McCarty

Welcome to the book blast for The Angel and the SEAL by Petie McCarty, another installment of her Mystery Angel Romances series! I have an excerpt for you to read today before you download your own copy. Please be sure to let the author know what you think in the comments section! And then follow the rest of the tour for even more excerpts and chances to enter the giveaway at the end. 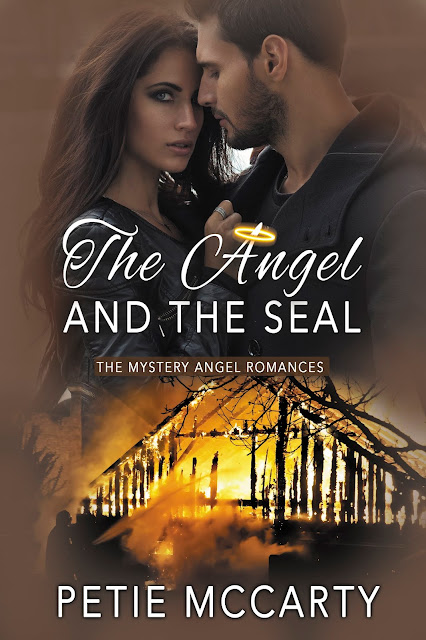 The Angel and the SEAL

The Angel and the SEAL . . . a cozy mystery with romantic suspense from the Mystery Angel Romances series. An angel hidden in every book waiting for you to figure out who . . .

Foreclosure looms for Cory Rigatero as she fights to keep her rustic resort near Mt. St. Helens afloat after her brother deserted her to join the SEAL Teams. Cory's whole world dives into a tailspin when Sean MacKay shows up at her resort with the news of her brother's death and the wild suspicion her brother may have sent her traitorous classified documents. No way will Cory trust MacKay -- the man who once seduced her and then vanished into the night without a trace.

“Will you be careful with the sheriff too?” Mac asked.

“Because he protects everyone else.”

“He’s after you. Who protects you from him?” he asked, growing indignant.

“Dane’s not after me,” she teased, trying to lighten the atmosphere sparking between them.

“Right, and Bunny’s not after me.”

That restoked Cory’s ire. “It’s a free country. If Bunny’s after you, you’re welcome to her.”

“And you’re welcome to Tyler, is that it?” he growled.

No, that wasn’t it, but he’d brought up Bunny and touched off Cory’s temper all over again. The two of them were arguing like a boyfriend and girlfriend, but the gorgeous man trifling with her was a complete stranger. Almost. So why did he feel like anything but a stranger? She had no answer for that.

Distance. That’s what she needed. Time to think this through before she made another disastrous mistake. One in her life had been enough.

“Sure. Why not?” she answered him, trying to sound nonchalant. “Like I said, it’s a free—”

His lips silenced hers. The moment his mouth touched hers, she was lost in the irresistible scent and taste of him once again. He devoured her mouth as though he wanted to become part of her. No gentle kiss this.

Her hands roamed up his broad chest and caressed his hard, roughened muscles. She felt him shudder. Amazed she held the power to create such a reaction in this strong unyielding man, she fisted her hands into the curls at his nape. The low growl deep in his throat rewarded her efforts, and he crushed her tighter still, his arms banded around her back as though he intended to squeeze all thoughts of Dane from her mind.

She leaned back only enough for much-needed air, and the sensual fog retreated. Coherent thought tried to regain purchase. Enough so, she felt the need to explain her . . . desire.

Dropping all pretense of playfulness to the wayside, he took her mouth hungrily, like a starving man pouncing on the chief entrée at Sunday brunch buffet.

Need, hot and hard, spiked through her, and Cory reveled in the tingles buzzing up and down her spine. Tingles she hadn’t experienced in years. Tingles she had feared no other man’s kiss would ever give her. She rejoiced in their reappearance, previously buried with long-repressed emotions, and she wrapped her arms around Mac to center herself, fearful she’d fly off into the atmosphere so charged were all her nerve endings.

Even on that fateful night on this same lakeshore so many years ago, when she’d crossed an invisible line with a different guy, she had never been kissed like this. This was a man’s kiss. A hungry man, a powerful man.

Petie spent a large part of her career working at Walt Disney World—"The Most Magical Place on Earth"—where she enjoyed working in the land of fairy tales by day and creating her own romantic fairy tales by night, including her new series, The Cinderella Romances. She eventually said good-bye to her "day" job to write her stories full-time. These days Petie spends her time writing sequels to her regency time-travel series, Lords in Time, and her cozy-mystery-with-romantic-suspense series, the Mystery Angel Romances.

Petie shares her home on the Cumberland Plateau in Tennessee with her horticulturist husband and an opinionated Nanday conure named Sassy who made a cameo appearance in No Angels for Christmas.

Petie McCarthy will be awarding a $10 Amazon or B/N GC to a randomly drawn winner via rafflecopter during the tour as well as 3 ebook copies of No Cowboys No Angels, Book 2 in the series.