The courtroom scenes are wonderfully written...the characters are well described and the author paints a picture of each in the mind of the reader...Strong plot, strong characters and a strong writing style that I really enjoyed. This one is a definite "thumbs-up." Strongly recommend! I look forward to reading additional works by N. Lombardi, Jr.
~Kim M Aalaie, Author's Den

One of my favorite suspense novels of the year. It will make you question the legal system.
~The Eclectic Review

The courtroom action is excellent, trimmed to the most gripping parts of the trial, with plenty of emotional impact...a fairly realistic portrayal of the way small-town US society works...a fast-moving story with plenty of dramatic moments, and a big twist in the final pages.
~Crime Review 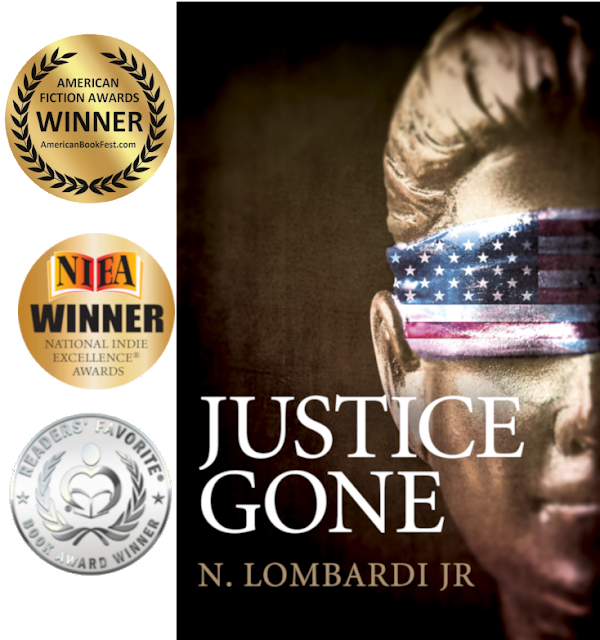 When a homeless war veteran is beaten to death by the police, stormy protests ensue, engulfing a small New Jersey town. Soon after, three cops are gunned down.

A multi-state manhunt is underway for a cop killer on the loose. And Dr. Tessa Thorpe, a veteran's counselor, is caught up in the chase.

Donald Darfield, an African-American Iraqi war vet, war-time buddy of the beaten man, and one of Tessa's patients, is holed up in a mountain cabin. Tessa, acting on instinct, sets off to find him, but the swarm of law enforcement officers gets there first, leading to Darfield's dramatic capture.

Now, the only people separating him from the lethal needle of state justice are Tessa and ageing blind lawyer, Nathaniel Bodine. Can they untangle the web tightening around Darfield in time, when the press and the justice system are baying for revenge?

“Didn’t we meet last year at the meeting of the New Jersey Bar Association?” Bodine asked, as his daughter collected their papers and put them in their briefcase.

“Thought so. I never forget a voice.”

That comment threw Fiske off-center for a moment. “I just wanted to, well, shake hands so to speak, before we come out fighting.”

“Is your hand out there in the air, waiting for mine? Cause if it is, you can put it back wherever you had it. I don’t shake hands these days. And while you’re at it, you can remove that smug smile off your face. I don’t have to see it, I can tell by your tone. You’ve already pissed me off, and this is just the arraignment. So I’m not exactly in a gentlemanly mood. And if you try to set up my client by having him mingle with the others, there’ll be hell to pay. Getting my drift, son?”

Fighting words for sure, but the word that provoked Fiske the most was the condescending “son,” just as Bodine had figured it would. “Is that a threat, Mr. Bodine?”

Emily tugged at her father’s arm with the covert message that he quit this repartee. He turned to leave, but not before saying, “No, Mr. Fiske, just a consequence.”

N. Lombardi Jr, the N for Nicholas, has spent over half his life in Africa, Asia, and the Middle East, working as a groundwater geologist. Nick can speak five languages: Swahili, Thai, Lao, Chinese, and Khmer (Cambodian).

In 1997, while visiting Lao People's Democratic Republic, he witnessed the remnants of a secret war that had been waged for nine years, among which were children wounded from leftover cluster bombs. Driven by what he saw, he worked on The Plain of Jars for the next eight years.

Nick maintains a website with content that spans most aspects of the novel: The Secret War, Laotian culture, Buddhism etc. http://plainofjars.net

His second novel, Journey Towards a Falling Sun, is set in the wild frontier of northern Kenya.

His latest novel, Justice Gone was inspired by the fatal beating of a homeless man by police.


N. Lombardi Jr will be awarding a $10 Amazon/BN GC to a randomly drawn winner via rafflecopter during the tour.