Racing the Whirlwind by January Bain

Welcome to the book tour for Racing the Whirlwind by January Bain! Check out an excerpt from this third romantic suspense novel in her TETRAD Group series and then be sure to follow the tour for more! Leave comments and questions along the way and then be sure to enter the giveaway! 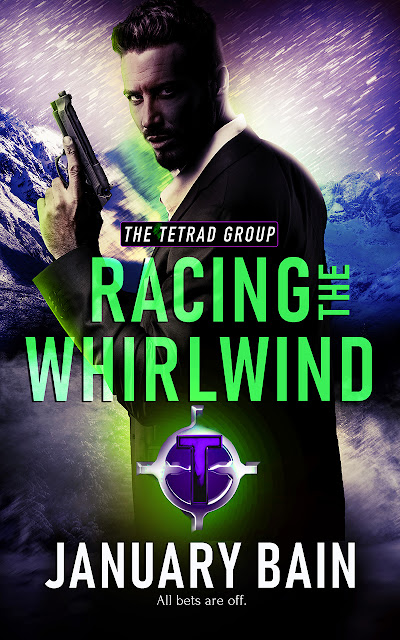 Alysia has spent the last ten years avoiding relationships, but the night her life implodes, she meets Nick. Now all bets are off.

Haunted by her past, Alysia’s desperate for answers. She needs Nick and the group sworn to aid those unable to go to the law for help, because TETRAD will do what law enforcement cannot or will not—believe her when she says she knows who’s after her.

My name is Nick Wheeler and I’m with TETRAD, where I use my unusual skillset to best advantage. But what I didn’t expect is to become involved with a trauma nurse, or for it to become so deadly, with the stakes rising hour by hour.

I’m Alysia Rossini. One look at Nick Wheeler and I know he’s the one to help me forget the past. But is it fair to expose him to such danger? And will I live long enough for the chance to be with him?

Alysia Rossini peered through the windshield of her Dodge RAM at the weather, which was growing fouler by the second. Her hands were clamped so tight to the steering wheel that her knuckles ached. The painted lines delineating the watery pavement had long vanished. Desperate to keep the vehicle on the road, she leaned in closer to the dash, her clothes damp and clammy from the perspiration that trickled down her spine. She had the wipers cranked to their highest setting, yet they were unable to keep up with the deluge of sleeting rain lashing the thick glass in heavy gusts. Her stomach churned with worry and the terrible sense of foreboding disquiet that had crept in during the hour-long journey, fueled by her intense isolation.

The hazy, gray, uncaring Cascade Mountains stretched out for hundreds of kilometers in all directions, looking like a distant planet. Driving home alone made Alysia hesitant to pull over. It was just as easy to get rear-ended on this treacherous highway as not. And that vehicle following behind was stalking too damn close. The driver needed their fucking head examined.

A few more tense kilometers inched by, Alysia clenching her hands tight to the wheel and flicking her glance at the rear-view mirror every few seconds. Her reduced speed kept her from hydroplaning the four-wheel-drive truck but increased the length of time with the idiot on her tail.

Finally, the squall began to ease, the lights of the vehicle behind her becoming more than just two white eyes glaring through the mist. Rolling her head from side to side, she worked to loosen the tenseness of her shoulders. The harsh reality of her twenty-four-hour work day followed by a visit with her friend Kate flashed through her mind, bringing with it added sadness and desperation—and an even more acute sense of isolation.

She shook her head, trying to shake the memories free. Reliving a nightmare loop never solved a damn thing. What she needed most was a drink. Ease from the pain of the job and Kate’s devastating illness. Thank goodness it wasn’t far to the gas station. She sped up, pressing her foot down on the pedal. The lights of the forecourt beckoned just ahead, sanctuary in a storm.

Oh, God no. The SUV following too damn close fishtailed in her rear-view mirror. It swayed side to side in a macabre dance, jerking back and forth like an artful pickpocket escaping the hands of justice. In slow motion, Alysia took in the horror of the vehicle beginning its death roll. It spun out of control, end over end, then came to rest on the side of the highway, belching billows of smoke. 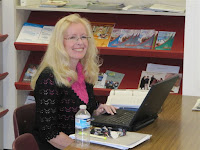 January Bain has wished on every falling star, every blown-out birthday candle, and every coin thrown in a fountain to be a storyteller. To share the tales of high adventure, mysteries, and full blown thrillers she has dreamed of all her life. The story you now have in your hands is the compilation of a lot of things manifesting itself for this special series. Hundreds of hours spent researching the unusual and the mundane have come together to create books that features strong women who live life to the fullest, wild adventures full of twists and unforeseen turns, and hot complicated men who aren’t afraid to take risks. She can only hope her stories will capture your imagination.

Any other social media -

January Bain will be awarding a $25 Amazon/BN GC to a randomly drawn winner via rafflecopter during the tour.