All You Need is a Duke by Bianca Blythe

Today's featured excerpt comes from All You Need is a Duke, a new historical romance from Bianca Blythe. Be sure to let her know what you think in the comments section! And then after you download your own copy, be sure to check out the rest of the tour for even more. Plus there's a great giveaway at the end! 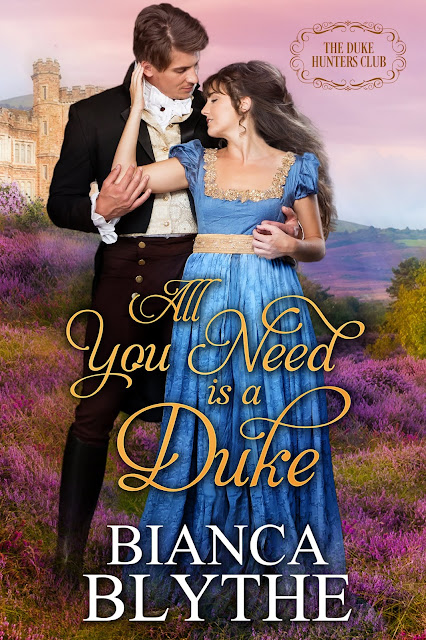 When Margaret Carberry’s mother drags her upstairs at a ball, Margaret does not expect her mother to tie her to the bed and lock the door. Unfortunately, Margaret’s mother has taken it upon herself to declare Margaret compromised—whether or not Margaret wants to resort to such tactics to snare a husband.

Jasper Tierney, the Duke of Jevington, is surprised to encounter a half-clothed woman sprawled upon his bed. He is even more shocked to discover her identity. Margaret Carberry is renowned as an incorrigible wallflower, not a seductress, no matter how appealing her bare flesh is against his bedding. When Margaret declares she won’t go along with her mother’s scheme and will find a husband on her own, Jasper vows to assist her, lest Margaret’s mother concoct another method to arrange a compromising situation. Jasper is certain of one thing: he has no desire to marry.

As Jasper works to match Margaret to one of his fellow dukes, the prospect of a forced marriage with her lacks its earlier loathsomeness. Perhaps he missed his chance for true bliss.

Jasper might be confused, but he could still act like a gentleman. He approached her with speed.

Normally if a woman called him to his bed, it was so he might touch her there and there and at once. Despite the woman’s urgent tone, and its resemblance to past bedside escapades, Jasper doubted this woman desired that.

After all, he didn’t recognize her voice.

He grabbed a candle and lit a match, casting light toward the bed.

There was indeed a woman on his bed. She lay in a half-clothed state. Dark locks spilled over her shoulders.

The sight was not entirely uncommon, even if he’d reduced such instances since his friend Hugh had married.

But this woman’s hands were tied to his bedposts.

Of all the women he might find on his bed, he would not have expected Miss Carberry. He’d met her at a house party, and he remembered her as a rigid wallflower, one who found even the prospect of making conversation daunting, who had yet to master the not-so-very-difficult rules of small talk.

But then she’d been dressed primly. Unlike her companions she hadn’t shown any eagerness to make conversation with him. She’d never fluttered her lashes. Indeed, if anything she’d seemed eager to drift into the background.

A distinct smell of champagne wafted toward him, and long curly hair framed her face in an appealing manner. She was clothed in a yellow dress, though his attention was on a deep tear in her gown that revealed delicious skin. 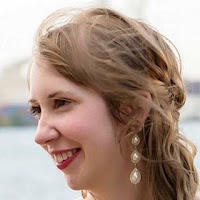 Born in Texas, Wellesley graduate Bianca Blythe spent four years in England. She worked in a fifteenth-century castle, though sadly that didn't actually involve spotting dukes and earls strutting about in Hessians.

She credits British weather for forcing her into a library, where she discovered her first Julia Quinn novel. She remains deeply grateful for blustery downpours.

Bianca lives in California with her husband.

Bianca is giving away a $15 Amazon/BN gift card in the giveaway. Follow the tour for more chances to win!