Top 10 Things About Eve Sanchez from Goddess of the Wild Thing by Paul DeBlassie III ... and more

Today we welcome author Paul DeBlassie III back to my blogosphere. Today he's telling us all about Eve Sanchez, the protagonist from his award-winning thriller Goddess of the Wild Thing. He also gives us some insight into his writing and you can read an excerpt from the book. Follow the tour for more and let him know what you think along the way. Best of luck entering the giveaway!

Your journey to becoming a writer:

By age sixteen, I’d read Jung and Freud and decided I wanted to become a psychologist and writer. That’s why my novels are psychological thrillers. They tap into the tumble of rumble of the unconscious mind.

An idea springs to mind then, if it lingers over months and sometimes years, I hit the page running and word after word, sentences and paragraphs a story is birthed. Then comes the cleanup – edits, edits, edits, etc. As we all know, the writing is in the rewriting!

Eve Sanchez, the protagonist of the Goddess of the Wild Tuing, encounters a seductive and frightening man, criminal lawyer Sam Shear. He introduces Eve to a supernatural world in which the wicked powers of a surrogate mother’s twisted affection threaten love and life. The evil woman walks a fine line between sanity and insanity, dark and mysterious happenings in her wake. Where there’s love, there is often a woman who feels spurned and wills the demise of the loved woman. Eve struggles to discover the identity of the evil woman, a fierce battle with an unexpected outcome. In therapy, I help patients through love issues like this, Goddess of the Wild Thing dramatizing what happens more often that we think.

Preview of an upcoming book/series:

After writing The Unholy and Goddess of the Wild Thing, I’ve thought about resting; but the resting is in the living and writing—an everyday experience. The new book The Goddess of Everything is white-hot – there’s a woman who thinks she all that and more to boot - can control, cajole, and bag whomever and whatever her nefarious heart desires. It’s a visionary thriller of mother love gone bad and a son’s desire to break free. There’s twist and turns and an unexpected heroine – The Goddess of Everything! 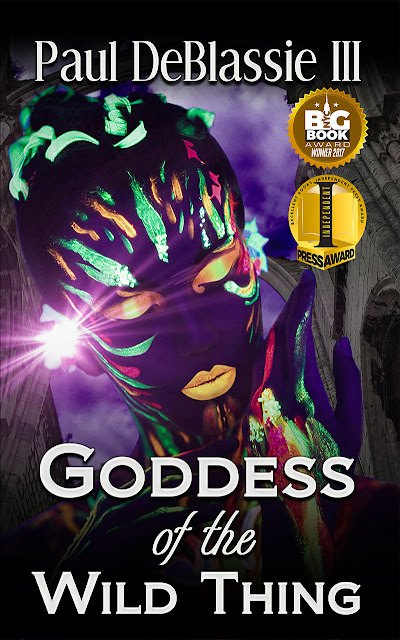 Goddess of the Wild Thing

Winner of the Independent Press Award and the NYC Big Book Award for Visionary Fiction!

Eve Sanchez, a scholar of esoteric studies, is driven into unreal dimensions of horror and hope as she encounters a seductive and frightening man, criminal lawyer Sam Shear.

Sam introduces Eve to a supernatural world in which the wicked powers of a surrogate mother’s twisted affection threaten love and life. Struggling to sort through right from wrong, frightened yet determined, Eve nears despair.

Goddess of the Wild Thing reveals the dramatic tale of one woman’s spiritual journey where metaphysical happenings, unexpected turns of fate, and unseen forces impact her ability to love and be loved.

In the magical realm of Aztlan del Sur, a mythopoeic land of hidden horrors and guiding spirits, Eve, with three friends and a wise old woman, is caught in an age-old struggle about love—whether bad love is better than no love— and discovers that love is a wild thing.

“Shirley spoke up, “Maybe we just gotta give it up and say there’s no good out there and no damn good men.” Shirley spat on the sidewalk, as she was prone to do when attitudes turned south and a pissed-off mood overrode a physician’s reserve. A petite woman, hovering around five-foot-three, she was a spitfire to friends and foes. Her red hair was a fine match for her spicy temperament. She never hesitated to snap her tongue, making an envious woman or cocky man shrivel and long to crawl into a nearby hole and cry. Shirley lived as a healer and a warrior, a woman who cared tenderly for the hurting and raged viciously at pretense and abuse.

Eve, Shirley, and two other friends, Tanya and Samantha, were plagued by man troubles the way pollution settles in during dusty days and humid nights in the Middle Rio Grande Valley of Aztlan del Sur. They were four esteemed professional women who could have any man they chose. Yet time and again, they went for the lower, the bad, the worst. They sabotaged the good, the permanent. Commitment was a frightening consideration for four women who’d suffered childhoods of parental dysfunctional neglect and split-ups. They often quipped, “We found each other because like finds like.” Tonight, Eve’s troubles were front and center. She’d done it again or at least worried she had. The glitch in the man was in the type she attracted: charmers—striking and untrue. Suffering had begun. Time was critical. To stick it out or get out was her dilemma. Things with a new man had taken a terrifying turn.”

Paul DeBlassie III, Ph.D. is a depth psychologist and award-winning writer living in his native New Mexico. He specializes in treating individuals in emotional and spiritual crisis. His novels, visionary thrillers, delve deep into archetypal realities as they play out dramatically in the lives of everyday people. Memberships include the Author’s Guild, Visionary Fiction Alliance, Depth Psychology Alliance, International Association for Relational Psychoanalysis and Psychotherapy, and the International Association for Jungian Studies.

Paul DeBlassie III will be awarding $25 Amazon or B/N GC to a randomly drawn winner via rafflecopter during the tour.