Welcome to the blurb blitz tour for False Light by Claudia Riess! I have an excerpt from this interesting mystery for you to enjoy today before you download your own copy. Be sure to let the author know what you think in the comments section! Follow the tour to see even more, and then remember to enter the giveaway! 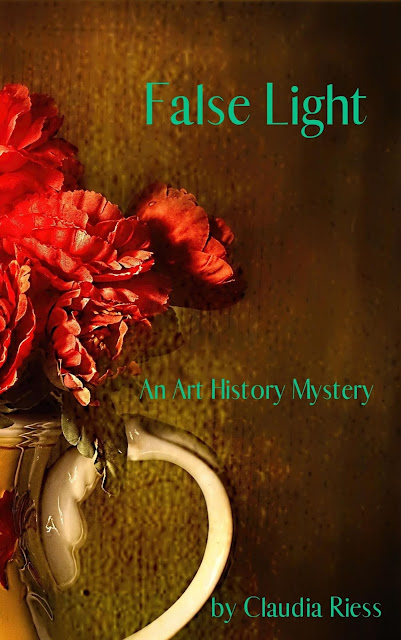 Academic sleuths Erika Shawn, art magazine editor, and Harrison Wheatley, a more seasoned art history professor, set out to tackle a brain teaser. This time the couple—married since their encounter in Stolen Light, first in the series—attempt to crack the long un-deciphered code of art forger Eric Hebborn (1934-1996), which promises to reveal the whereabouts of a number of his brilliant Old Master counterfeits. (Hebborn, in real life, was a mischievous sort, who had a fascination with letters and a love-hate relationship with art authenticators. I felt compelled to devise a puzzler on his behalf!) After publication of his memoir, Drawn to Trouble, published in 1991, he encrypts two copies with clues to the treasure hunt. On each of the title pages, he pens a tantalizing explanatory letter. One copy he sends to an art expert; the second, he releases into general circulation. The catch: both books are needed to decipher the code.

When the books are at last united 25 years later, Erik and Harrison are enlisted to help unearth their hidden messages. But when several research aides are brutally murdered, the academic challenge leads to far darker mysteries in the clandestine world of art crime. As the couple navigate this sinister world, both their courage under fire and the stability of their relationship are tested.

“You must try a crostini,” came a vaguely familiar voice from above. Harrison looked up, surprised to encounter the striking figure of Aldo Fabbri pressing forward a fair young tray-bearer, his hand at the small of her back.

Harrison’s love fest with Florence was instantly tarnished. “Good to see you,” he said nevertheless, extending his hand to Aldo before plucking an hors d’oeuvre of bread and chicken liver pate from the waitress’s tray. “Come sit down,” he suggested with a near-genuine smile.

“Certamente,” said Aldo. “But first we must request the wine—from the Fabbri vineyard, of course.” Aldo turned to the waitress. “Per favore, a bottle of the Chianti Classico riserva,” he slickly commanded, with a proprietary ogle. “As you might recall,” he said, turning back to Harrison, “it’s our signature wine, made from the Sangiovese grape. This year’s crop”—he glanced heavenward—“supremo!” With a nod, he dismissed the waitress, then pulled out a chair.

“I didn’t see you at the conference,” Harrison said, trying not to recollect in vivid detail Aldo’s play for Erika’s affections at their encounter in Tuscany over a year ago. The seduction attempt had taken place when he and Erika had visited the Fabbri estate as part of their art recovery mission. Erika had not succumbed to Aldo’s efforts, but her moment of hesitation had caused Harrison great consternation. What a presumptive asshole! he silently hurled at himself. Erika had been in the initial stages of breaking free of her mistrust in men because of what she was beginning to see in Harrison, and he had not shown her the least bit of empathy in response. “The lecture hall was rather crowded,” he said, thrusting his attention to the subject at hand. “Perhaps you were hiding in the rear?”

“Alas, I arrived too late to attend the talks,” Aldo said, smoothing back his coal black mane.

“However, I did hear your talk on Gericault was admirable—ah, here’s our wine,” Aldo noted, at the waitress’s approach.

As they clicked glasses, Aldo cocked his head, as if at a sound in the distance. “I’m wondering. Whatever became of that woman you were with—Erika Shawn was her name, una donna molto bella e special! As I recall, a free spirit finding herself tethered to Puritanism, or merely conflicted by it. Either way, a pity.”

“Tethered to me, if you must know,” Harrison said, as coolly as his clenched jaw would allow. “As my wife.”

“Ah, lucky man to have tamed her!” Aldo looked about. “But where is she? Another toast is in order!”

“Back home, in New York. Working.”


Available on Amazon
Sale priced for $0.99 for a limited time!
(affiliate link) 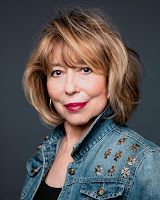 Claudia Riess, a Vassar graduate, has worked in the editorial departments of The New Yorker and Holt, Rinehart, and Winston and has edited several art history monographs.

Claudia Riess will be awarding a $50 Amazon gift card and three sets of Art History Mystery Books: Stolen Light and False Light (US only) to a randomly drawn winner via rafflecopter during the tour.