Author Paddy Tyrrell takes us behind the scenes of Lumina

Today we have a unique kind of guest post for you! Author Paddy Tyrell is taking us behind the scenes of Lumina in a very creative way. You'll also get to read an excerpt before you download your own copy. Be sure to let her know what you think in the comments and then check out the rest of the tour. Best of luck in the giveaway!

The bronzite, Chrystala, is kidnapped by the Black Dragon and taken to Kuhla where the king’s sorcerer examines her to see if bronzites will be suitable fodder for their army. This is his report to the king on his tests.

For the eyes of King Zheldar only

Reference His Majesty’s dragonlite experiment, I, Jaldeen, Lord Cantrek, Sorcerer to His Majesty, King Zheldar of Kuhla do humbly submit to His Royal Highness the results of my examination of our first female specimen.

The specimen was captured by Xeralith, Black Dragon of Kuhla on the fifth day of Semilan, A.L. 3025 in Lumina. The Lumans have named the creations of the Dragonlite experiment ‘bronzites’ and I will use this description for ease of reference.

Purpose and Limitations of Testing

The aim of these tests is to assess the potential for Kuhla to use bronzites as an expendable part of our armies.

My instructions were to avoid permanent damage to the body since the specimen is to be presented as a gift to Her Majesty, Queen Dandrella. This precluded the use of certain torture instruments.

The tests were conducted in my workshop. The specimen was retained in a cage and subjected to a series of experiments. Physical tests included acids, fire, gases, poisons, forced standing/hanging and so forth. Also no food or sleep for 3 days (typical period for forced march) and freezing temperatures for the same period (to simulate mountain conditions).

Description of Bronzite Specimen 1A

The specimen is notably taller and more muscular than Luman or Kuhlan women. Assuming the same characteristics for the males, this will be a useful asset in battle.

Of particular note is the golden color and metallic sheen of the skin – a resemblance to burnished metal. I performed a series of tests to discover its resistance to injury.

The skin is resistant to fire. No change to the skin surface when exposed to extreme heat. However, direct flame did eventually elicit signs of pain and I ceased before marring the skin.

The above attribute is of prime important in battle

On close inspection the eyes are larger than the norm and have many facets (as seen in jewelry from the mines of Coradon). There is a flicker in interior of eye resembling a flame (significance unknown). My tests would indicate excellent ability to:

see further around the body than normal

spot movement at a significant distance

Further understanding of the make-up of the eyes would require their removal. In view of my lord’s intention to donate the specimen to Queen Dandrella, this will have to be left to a later date.

The specimen’s back teeth are serrated and come to a point. They can give a nasty bite, as I experienced to my cost

Resistant to some of the lethal or debilitating gases (swamp gas for example). Test requirements prevented me from experimenting with various poisons. This should be done at a later date

Mind and brain (as identified from observation – no dissection of brain at this time):

Your Majesty’s ability to touch and influence her mind is an important weapon, indicating potential to mold the bronzites to your will

Linked to this is the reaction of the dragonlites to her presence. Frenzied activity occurred when she entered the breeding pools. I am unable at this stage to gauge the usefulness of this phenomenon

Evidence of restlessness and low attention span. Unable to ascertain if this is a peculiarity of bronzite specimen 1A or of all bronzites

Defects: there are two bumps on the specimen’s back. It is unclear whether this is a normal physical attribute or one particular to specimen 1A.

Weaknesses: Went into a ‘shut down’ state when closely confined. I could not tell if this was accompanied by any mental stress or was a survival instinct

The Black Dragon reports she adjusted well to her flight

Xeralith is able to sense her presence

The horses were afraid of her

The bronzites should be an invaluable addition to our armies. 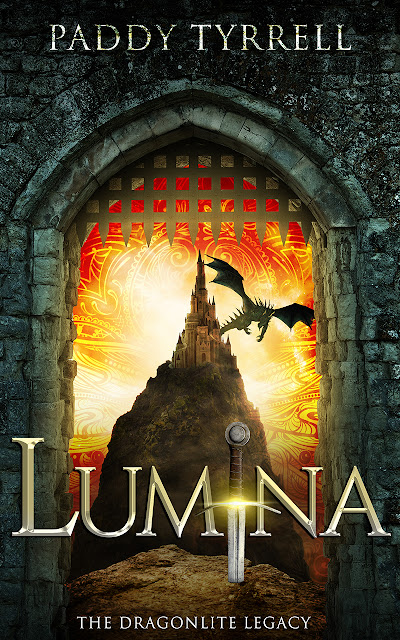 A generation designed by sorcery to destroy your people. Two races mired in conflict. Can a pair of outcasts unite them against an enemy who would enslave them all?

The birth of ‘bronzite’ babies in Lumina heralds the onset of war. The people take fright at the golden children and banish them from the land. A dangerous move. King Zheldar, commander of the black dragon, is attacking Luman borders. If he wins bronzite support for his army of monsters, Lumina is lost.

Davron Berates cannot share his people’s hatred of the children and, on discovering he has a bronzite brother, sets out to find him. At his side travels Chrystala. A bronzite, she has twice his strength and three times his determination.

When the black dragon kidnaps Chrystala, Davron is faced with a terrible choice: save his friend or save his nation.

She ducked her head to protect herself – in the nick of time. Black clouds erupted from the dragonrock, awakened by their arrival. A host of vampire bats swooped in a blur upon the convoy, webbed fingers acting as wings. In their thousands, they streamed towards the Kuhlans. Courtiers and servants alike screamed in terror and ran for cover. The bats swarmed after them. They landed on heads and shoulders and hair, and clung with their claws. They spread their wings across the faces of their prey and blocked every orifice in a suffocating grip. The victims thrashed and struggled and gasped for breath. When their strength failed they collapsed onto the sand. With tiny teeth, sharp as spear points, the bats tore at Kuhlan skin and lapped up Kuhlan blood until they were satiated.

Salazai jumped down from Argentia and crouched against her flank, searching frantically for shelter. Bodies were strewn over the sand, and carts turned on their sides, dragged over by the horses in their panic to escape.

So that was how it would end. She would die here in the desert, her blood sucked dry. She shielded her face with her hands and peeked through her fingers, unable to stop herself from watching the slaughter. Lord Cantrek stood alone amidst the destruction and, arms outstretched, he chanted words of magic, his voice pounding the sands in time to the beat of her heart. Transfixed, she watched a twisting funnel of wind appear in answer to his call, sucking up sand and dust as it whirled over the desert. 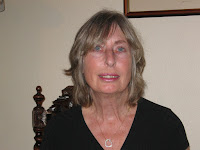 I was raised in Kent, the garden of England, and lived in an Oast House whose round rooms were once used for drying hops. Must be why I’ve enjoyed a drink ever since!

At university, I fell in love with medieval French writing, discovered The Gormenghast Trilogy, and became hooked on fantasy.

I have sailed down the Yangste, survived an earthquake in Cairo, and picnicked in the Serengeti. My travels for work and pleasure have inspired my fantasy world. I now live in France with a naughty Australian Labradoodle, a jealous cat and a squash mad husband. Our two huskies, Ice and Sapphire, are sadly now gone but are transformed into wolves and immortalised in my book. Lumina is my debut novel and the first in a trilogy.

Paddy Tyrrell will be awarding a $20 Amazon or Barnes and Noble GC to a randomly drawn winner via rafflecopter during the tour.