Sympathy for the Devil by Alex Stevens

If you're a fan of fantasy, then you're going to want to check out this excerpt from Sympathy for the Devil by Alex Stevens! Get more as you follow the tour. Be sure to let the author know your thoughts along the way! And best of luck entering the giveaway. 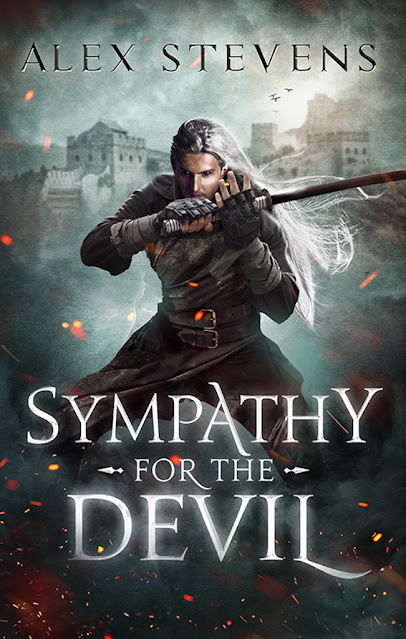 Four warriors on one hell of a mission.

Lieutenant Colonel Tyler Graven is known as the “Demon of Kyoto,” and he specializes in death. When an assassin attempts to kill pharmaceutical mogul Mortimer Sackler, Tyler becomes the lead suspect and the target of a $100 million dollar hit. To save himself and clear his name, he must hunt down the true killer, a deadly entity known only as The Priest.

Tyler teams up with his former military unit, The Four Horseman, including his brother, crack-shot Corporal Jack Graven, the mysterious Lance Corporal Jin Xialong, and his one-time flame Colonel Diana Levitas. Once, they were an elite fighting team known for completing two of the most successful campaigns against terrorism ever launched. Now, they’ll find themselves locked in a war with The Church, the most influential organization on the planet--and pitted against the supernatural forces of the Underworld itself.

During their mission, Tyler and Jack learn of the legendary Black Muramasa, the only weapon that can destroy immortals such as demons, angels, vampires, seraphim, and nephilim. As they uncover the secrets of the ancient black blade--and their own heritage--they are faced with unforetold powers and infinite evils. If the Four Horsemen succeed, they may save themselves. If they fail, it’ll cost them their sanity, their lives, and even their souls...

Here comes an action-packed, gun-slinging fantasy adventure that packs the punch of a military thriller combined with high-stakes supernatural intrigue.
Read an excerpt:

This is real. I know it.

An acrid and sour smoke that could only be gunpowder filled my nostrils, caking my mouth with the bitter taste of ammonia. The air sang with an angry chorus of cracking, snapping, and buzzing as tiny projectiles assaulted me in hushed gunfire from every direction. The thuds of pierced wood rang out like hail on a rooftop. My heart raced with pure terror as I cowered beneath the classroom table, hands pressed to my ears.

This is it. They found me.

I had broken one of the rules. I didn’t have a weapon. I had neither Shade, nor a gun, nor a bayonet. Not even a kitchen or pocket knife. I’d even abandoned my eighty-cent mechanical pencil on top of my notebook the moment the shooting began.

They were going to murder me, and there was absolutely nothing I could do about it. Thunder hammered in my head as pure terror consumed me; each second seemed an eternity. I was expecting to feel pain. Maybe even a part of me was hoping to hear one final gunshot that would be the last sound I would ever hear. Instead, I heard laughter.

Sheepishly, I poked my head above the classroom table. Every pair of eyes in my Beijing University International Business class had settled on me. Merriment filled more than a few, but concern and empathy occupied most. After a few moments of displacement, I realized what had occurred: I’d had another episode. This time it was during class, the attack ultimately spawning from my own imagination. And it was set off by one quiet click of a pen.

It was bad enough that I was the only white student in the classroom, as every other student was Chinese. Now I was the “crazy white guy” in the school. Unspeakable shame quickly replaced my confusion.

Alex Stevens is a Marine Corps Veteran with two deployments and a graduate of the University of Nevada, Las Vegas Interdisciplinary Studies program, a unique undergraduate degree that caters to students with various interests of study. He is also an advent traveler and philosophy enthusiast who has spent a lifetime studying religions, with a focus on Non-denominational Christianity. Alex spends most of his time going for walks, spending time with loved ones, and when the juices are flowing, writing. Fantasy fiction is his great escape from the mundane and he likes to create fantastical realities that are blended with non-fictional people, places, and events.

Goodreads: https://www.goodreads.com/author/show/20740528
The author will be giving away a $15 Amazon/BN GC via rafflecopter. Follow the tour for more chances to win!
a Rafflecopter giveaway
Posted by Andi at 3:30 AM
Labels: book excerpt, book promo, fantasy, giveaway, Goddess Fish