There's nothing like a good Christmas romance to get you feeling warm and fuzzy, which is especially nice during these crazy times! Read an excerpt and my thoughts of A Family for Christmas, the second book in the series by Nola Cross. Be sure to let her know what you think as you follow the tour. Best of luck entering the giveaway! 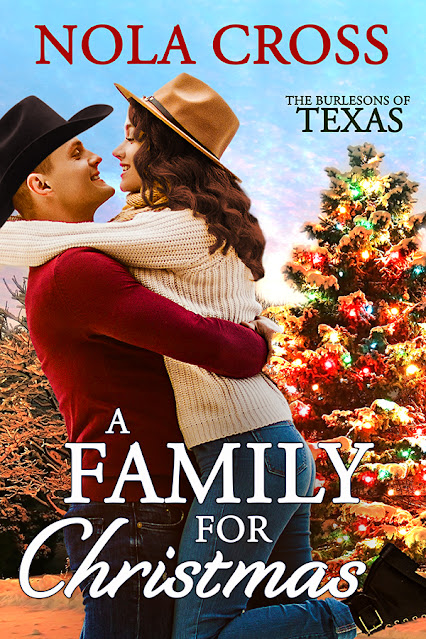 He never thought he’d have a real family Christmas…

For the past eight years, Bill Smith has been unable to set down roots. But he never forgot the magical night he spent with an auburn-haired beauty in Last Stand, Texas. When she finally tracked him down, he was more than happy to donate a kidney to AJ, the son he never knew he had. But now that AJ is better, Bill wants more time with him and his mother. He wants a family.

Annie Burleson can’t help but be grateful to this almost-stranger for saving AJ’s life. Still, she’s a little wary. AJ has already been through so much—what if Bill leaves again? And with Christmas in full swing, it’s difficult to discern which emotions are festive and which are forever.

As Annie and Bill’s lives collide, their mutual love for AJ makes this more than a marriage of convenience. But is it enough to give them the family Christmas they all deserve?
Read an excerpt:

Her door stood ajar, and he kneed it open. Inside, her bedroom was lit by candles that glowed softly from several locations. On either side of her bed, pink lightbulbs in the delicate glass lamps shed rose-colored light on turned-down bedclothes. She had prepared the room just for this moment. An invitation meant only for him.

“I see what you’ve had up your sleeve here, Mrs. Smith.” He laid her on the bed. Her still-damp hair rippled out in an auburn fan on the white pillowcase.

“I love it. What I love most is knowing you’ve been thinking about the two of us being here, about us making love.”

She gave him a sly smile. “I figured we’d end up here eventually.”

He ran his finger along the opening of her robe, from her breastbone to her waist. She gave a tiny gasp. “Can I unwrap you now?”

Available on Amazon
(affiliate link)
**My thoughts**
I've been reading a lot of contemporary western romances lately, and I'm happy that the holiday ones are starting to come out. This is the second book in Nola Cross's Burlesons of Texas series and is designed to work as a standalone. For the most part it does, as it focuses on the current relationship between Annie and Bill. But I felt like I was missing out on a lot of the backstory, even though a lot of it was explained briefly in the beginning.
We know that Bill and Annie had a one-night stand eight years ago, which resulted in AJ. Bill didn't know that he had a son, though Annie sort of tried to look for him. AJ was very sick and needed a kidney transplant. They finally tracked down Bill, who ended up being the donor. But then Bill disappeared again for a while, until Annie's brother encouraged him to come back around.
This is the part of the story that I want more details on, particularly why AJ needed the kidney transplant. That's the part that grabbed me with the blurb, as I've had friends who have had transplants and friends whose daughter had kidney cancer. And just I think that some of the interactions between Annie, AJ and Bill, whom he knew as only Dr. Smith around the time of the transplant, would have been filled with enough drama to warrant their own story. Perhaps there's more in the first book? I am interested in reading that one, to learn more about Clay and Jade's romance, as well as see how the interactions between this family play out back then.
But back to the book at hand. Annie steps in it when Bill returns and says sarcastically that they should get married. Bill calls her on her bluff, and two weeks later, they are married. But they are leading somewhat separate lives, as they really don't know each other well. Bill stays out in the lodge, but comes to the house to spend time with AJ. He and Annie spar a little bit, as they are each set in their own ways, but also are slowly reigniting that attraction that got them into the predicament. This time, at least, it's a slow burn and not a raging inferno in one night.
I admit that marriages of convenience often make me twitch a little bit, because they are so tricky and can easily go quite wrong. But the affection that these two have for their son, and slowly build for each other, really makes you want to root for them to work it out. They've both been hurt in the past and they really could heal each other. Naturally there's a bit of predictable, formulaic conflict. But overall, I really did enjoy reading this story. It was a quick read and started to give me hints of those warm fuzzies I like when these holiday romances start coming out. I do want to go back and read the first book and am going to be on the lookout for future installments. I think I will also enjoy those.
Thank you to the author, Tule Publishing, and Goddess Fish for providing me with a requested review copy. All thoughts and opinions are my own.

I remember as a small girl being fascinated with the idea that people could make up stories and the stories became books. I began writing my own stories before I even started school, and won my first writing contest at the age of nine. It’s always been my dream to be a published author. The road was a long and twisting one, but I finally made it. I’m proud to be a two-time Golden Heart finalist, and several of my stories have been Amazon best sellers.

Pinterest: https://www.pinterest.com/nolacross/the-everfield-series/
The author will be awarding a $10 Amazon/BN GC to 5 randomly drawn winners. Follow the tour for more chances to win!
a Rafflecopter giveaway
Posted by Andi at 4:00 AM