Science fiction meets espionage in this new offering from Nathaniel Henderson. Today, you can check out an excerpt from Centricity and then download your own copy. You can follow the tour for even more. Be sure to let him know what you think along the way and take advantage of extra chances to enter the giveaway! 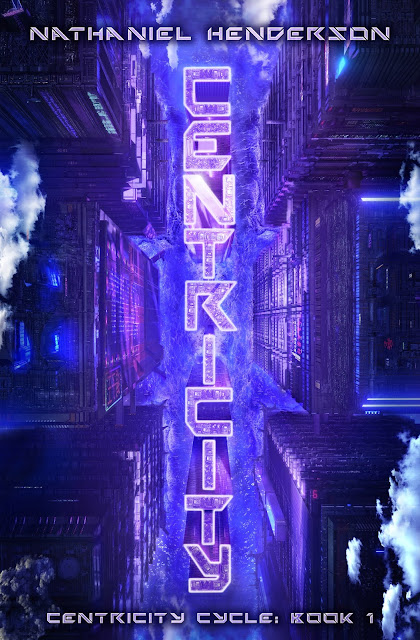 The world already ended once. Now it's up to an outgunned negotiator, a disavowed spy, and an immersion-addicted hacker to stop it from happening again.

Centuries after the Fold, civilization is fragile. In the megacity of Naion, people live stacked in arcologies, most never going outside because the air is another enemy. Instead, freedom comes from technology: bodytechs modify the human form while synthetic intelligences whisper through brainware.

Now a new bridge between man and machine has emerged, one that could destroy humanity’s second shot at survival—or save it, depending on who gets to it first....

Adasha Denali is one of the government’s best dispute resolution specialists, but when a scandal threatens to destabilize the city and end her career, she’ll need more than words to escape the fallout. Venturing out of her office and into a fight for the future, she’ll team up with a disavowed spy, learning the hard way that betrayal wears many faces, and one of them may be her own.

Neon Nik is an immersion-addicted IT freelancer struggling to pay off debts to circling loan sharks. Threats of dismemberment become the least of his problems when a surprise inheritance throws him into a vortex of corporate kill squads willing to burn the city down to find him.

Engineered spies, high-tech mercenaries, and immersion hackers collide in this first gripping installment of the Centricity Cycle.
Read an excerpt:

JUSTICE OFFICER NEIL Linz watched Adasha from across the table with bulbous eyes set in a surgically smooth face. The conference room lights reflected slashes of crystal white along the hard edges of his cheekbones, jaw, and the solid metallic wave one might call hair.

“Then to summarize: to your knowledge, Gabriel never shared classified information with any unauthorized persons, never lied to or withheld pertinent information from superiors, nor did he ever act in a way counter to the goals of the CPCA?”

Three dozen questions in and he hadn’t blinked once. No eyelids. Fully synthetic ocular implants didn’t require cover as they could be deactivated, but most people had some for aesthetic reasons. Linz obviously enjoyed the discomfort his perpetual stare caused; it was more unsettling than the facial canvases of self-mutilators.

“As I said, no, he did not.” Adasha clasped her hands together on the polished table, posture a vertical line, and stared straight back.

“Mmm.” Linz glanced at the folder in front of him, pushed aside a sheet of vaper to get at one beneath. His use of the physical medium felt like a strategic choice, as if to emphasize how solid his thoughts were. “When did you first meet Gabriel?”

Adasha wondered if Linz’s disregard of honorifics was meant to rile her. “Fourteen years ago.”

“You were a legislative director for Assembly Representative Jenov Quamay at the time.”

“I was an assistant.” It seemed Linz had made the mistake on purpose. To test the accuracy of her responses, she assumed. “The title of director came a year later.”

“Legislative director to CPCA senior analyst to interagency coordinator…. People usually climb in the other direction, no?”

Nathaniel Henderson was born in 1983 in Albuquerque, NM, USA. At a young age he moved to Tulsa, OK, where he spent the next fifteen or so years surviving adolescence. After graduating from high school, he packed it up and headed out west to the picturesque Santa Cruz, CA to attend UCSC. After a year of wrestling with computer science, he transferred to San Francisco to study computer animation and special effects. The career didn’t stick, and he set off to teach English in South Korea, Thailand, and finally Tokyo, Japan, where he currently resides.

Twitter: https://twitter.com/citizenn8
Nathaniel Henderson will be awarding a $40 Amazon or Barnes and Noble GC to a randomly drawn winner via rafflecopter during the tour.
a Rafflecopter giveaway
Posted by Andi at 3:30 AM
Labels: book excerpt, book promo, giveaway, Goddess Fish, science fiction, spy